Finding Inspiration At The Nelson During COVID-19

The Nelson Atkins Museum of Art has brought art lovers together for years. But with COVID-19 the Museum has had to stop in its tracks, and has faced a lot of uncertainty as they prepare to open on September 12. 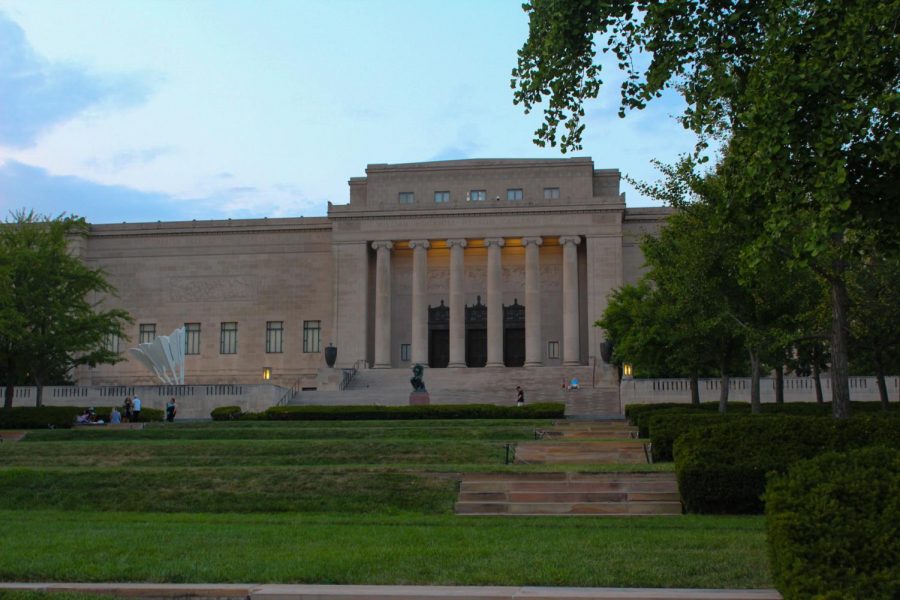 People enjoy the open lawn at the Nelson Atkins museum Aug. 29. Although the Nelson Atkins was closed for three months due to COVID-19, The sculptor park and lawn remained open to small groups. photo by Sydney Waldron.

The Nelson Atkins Museum of Art has inspired young minds in the Kansas City area with community teen activities year round. But with COVID-19, the museum had to close its doors to the public Mar. 13.The Nelson and it’s programs have attempted to keep in contact with the community, but have struggled in doing so. Elie Roddy is a part of the Teen Council at the Nelson, so her summer was impacted by the changes, and tells about what her summer has looked like since the outbreak.

“Previously, I attended biweekly meetings at the museum, but since the COVID-19 outbreak, we have met a few times over Zoom to discuss the future of teen programs,” Roddy said.

The Teen Council works year-round at the Nelson and oversees all the teen programs including teen workshops and the teen guide summer program. Typically, the teen programs provide events and jobs that allow teens to fill their summer such as teen tour guides and Nelson summer camp counselors. Unfortunately with this summer, these plans had to come to a halt.

“The Teen Program hasn’t done anything big to keep teens engaged, but the museum as a whole has put out virtual tours on YouTube,” Roddy said.

“This winter, we also held a large, masquerade themed ball that was very popular. We had over 700 attendants, and were very proud,” Roddy said. “We had another dance and other fun events planned for the spring, but all of it was cancelled due to the pandemic… Not only are these events major for the Teen Council, but they also hold a place for memories and talents to be shared amongst teens… Open Mics, were a once-a-month event we did to create space for creative expression and acceptance for teens who often feel silenced… it’s been really hard to not be at the museum, especially in the summer. Our teen community has been a wonderful safe space for me, and I’ve missed that a lot.” Roddy said.

The Teen Council faces a lot of uncertainty too. With these big summer plans being cancelled the Teen Council was left unsure of how to engage with the community, and with each other too.

“I miss all my Teen Guide pals and all the wacky kids that we have given tours. We still don’t know if there will be any Teen Programs for this school year, or if there will even be a council,” Roddy said.

“It’s certainly been different,” Bellew said. “When we first left in mid-March, the assumption, like many had at the time, was that we’d be back in the office within a few weeks… For me specifically, it’s been difficult because so much of my job normally involves actively running programs in-person.” Bellew said.

The programs held at the Nelson have found it hard to stay in touch with the community. Normally, the Teen Council’s programs are physical and in-person events, and what makes it special is the atmosphere that comes with being at the museum.

“We have our social media platforms, but they’re limited in how much they can do. For instance, a lot of programs focus on interactions between event attendees, such as our Open Mic Nights,” Bellew said. Since these events are very in-person based, the connection to other teens just isn’t the same virtually.

But, luckily these programs don’t plan to stop.

“We have some new ideas that we’re working on, but it’s all experimental right now because this is uncharted territory for us,” Bellew said. “We spent a long time focusing on in-person interaction, so we’re trying to create these new virtual opportunities for our community to stay in touch with the museum and our Teen Council.”

Christian Alldredge works under Brent Bellew and aside Elie Roddy as a part of the Teen Guides program. Additionally, Christian frequents Teen Council activities that include the Open Mic Nights. There, he performs his original music, and cheers on his peers as they perform too.

“I was at the Nelson at least one night a month for their Teen Council events, namely the Open Mic Nights, in which I would debut new music to a really warm, inviting, and accepting crowd of talented musicians, poets, and other performance artists.” Christian says.

Christian’s involvement in the Teen Guides program began in the summer of 2019, he and other teens that were a part of this program worked every day over the summer giving tours around Nelson. These tours were for kids who attended the many summer camps held at the Nelson.

“ I miss many of Teen Guide opportunities, which would’ve included things like giving tours of the Sculpture Garden on the Nelson’s lawn, working events like the Shuttlerock Battle of the Bands, and enriching kids summers through education and intersection of art and nature, which is what the Teen Guide Program strives to do.” Alldredge remarks. He plans on attending Teen Council program events, and hopefully being employed through the Teen Council program as soon as it is up and running again which is soon to be determined.

In preparation to reopen on Sep. 12, the Museum has created a “Frequently Asked Questions” page on their website, nelson-atkins.org. This page covers their new policies such as the museum remains free, but timed tickets are mandatory to ensure social distancing requirements. Masks are also required in the museum and hand sanitizer stations have been placed all over the Nelson as well. Additionally, the museum has a frequent cleaning of all surfaces and spaces. With all this preparation the Nelson Atkins Museum of Art is ready to re-open their doors and continue to inspire the creative minds of Kansas City.