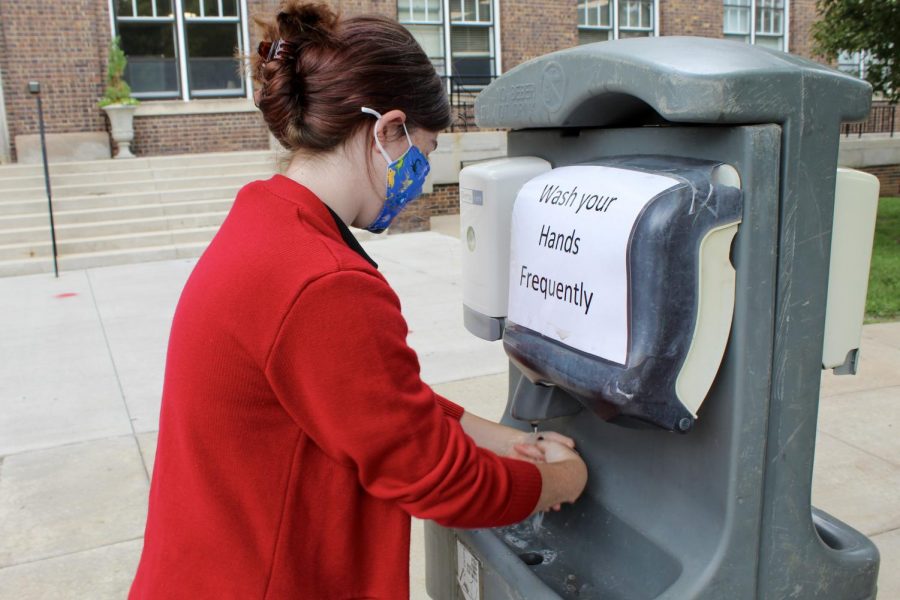 Junior Iris Kline utilizes a hand washing station in the quad Sept. 1. Students are encouraged to frequently sanitize and wash their hands in order to stay as clean as possible. photo by Katie Massman

St. Teresa’s Academy is back to school in-person, and with this comes some changes in the day-to-day schedule due to COVID-19. STA students have a brand new system to abide by when walking to class, learning and having lunch — all while maintaining 6 feet from their peers.

One of the bigger changes that has been made is the addition of classrooms outdoors. Due to limited space and the need for social distancing, STA has been forced to move several classes outside to ensure safety. The school nurse, Angela Sweeney, commented on this change.

“We have this campus available to us to do that, because we’re very fortunate in that sense that it just doesn’t happen that you have that much space outside that you can have so many classrooms outside,” Sweeney said. “I hope that stays to some form.”

St. Teresa’s Academy continues to stay open with all of the changes it has implemented working well so far, and the STA community hopes to remain open. The changes that STA made were very serious due to the ongoing pandemic and concerns from STA community members. They took a lot more planning than one may think, according to the school’s president Dr. Siabhan May-Washington. While students may have been enjoying their summer, administration, like school president Dr. May Washington, have been working to coordinate the many moving parts in the reopening of the campus.

“We hired some college interns to come in the summer and help with that work,” Dr. May-Washington said. “So that was massive. We also had to take a look at our ventilation and air filtration systems. We had to prepare to get, you know, stickers on the sidewalks and in the buildings. Just other things that so besides opening the doors there, there were a lot of other intricate steps that we had to think about to get the school ready again. So every program area had to be re-imagined.”

Along with the social distancing rules or guidelines, masks have played a role in the school’s transition to safety, as well as in that of the modern world. At first, masks were thought of as a potential issue. Girls showing up to school without a mask and claiming they left it at home or in their car was a problem foreseen by the administration. May-Washington shared what she first thought would happen with the mask rules.

“I just can imagine them saying they forgot their mask, you know, coming to school without it. And that has not happened,” May-Washington said. “So we’re doing a great job in our community, it’s just you know, sometimes you get a little close. But even though they get a little close, at least they have the mask on.”

The biggest struggle was deciding on whether to go back to school at all according to. May-Washington. There are always two sides to each debate and in this case, it was between the people who wanted to go back and the people who did not. In the end, she knew what was right.

“I think that’s the hardest decision is you’re gonna disappoint some people no matter what you do,” May-Washington said. “And, you know, I’ve learned not to take that personally, you know, it’s not about me and my feelings.”

Sophomore Emery Danker believes that the changes STA has made are the right choice. She was both happy and slightly confused to read about all of the changes that had been made to accommodate this new lifestyle.

“Administration has made some really smart changes,” Danker said. “I mean, of course, I’d love things to just, you know, be how they always were. But I think that they’re being smart about it and trying to do all they can to like, make sure we still have a good school experience.”

Another change was having students eat lunch with their advisors. This change was a shock, but Danker shared that she now enjoys eating lunch with her advisory.

“Honestly, it has kind of brought me closer with the girls in my advisory,” Danker said. “I’m spending like an hour or so with them every single day and just catching up. That’s kind of brought us closer together.”

Danker expressed that the changes at STA were needed, and that she respects the choices that the administration made. These difficult decisions have been crucial to whether or not STA may stay in school or how many people continue to come to class in person. Danker was excited to come back.

“I personally felt comfortable because I knew that STA was taking numerous precautions to make sure everybody was staying safe,” Danker said.