A Look at Theater From Behind a Mask

Adjustment in performances are being made all throughout the theater community due to the Corona virus and the effects of these changes can be seen in an actresses struggle to express emotion while wearing a face mask. 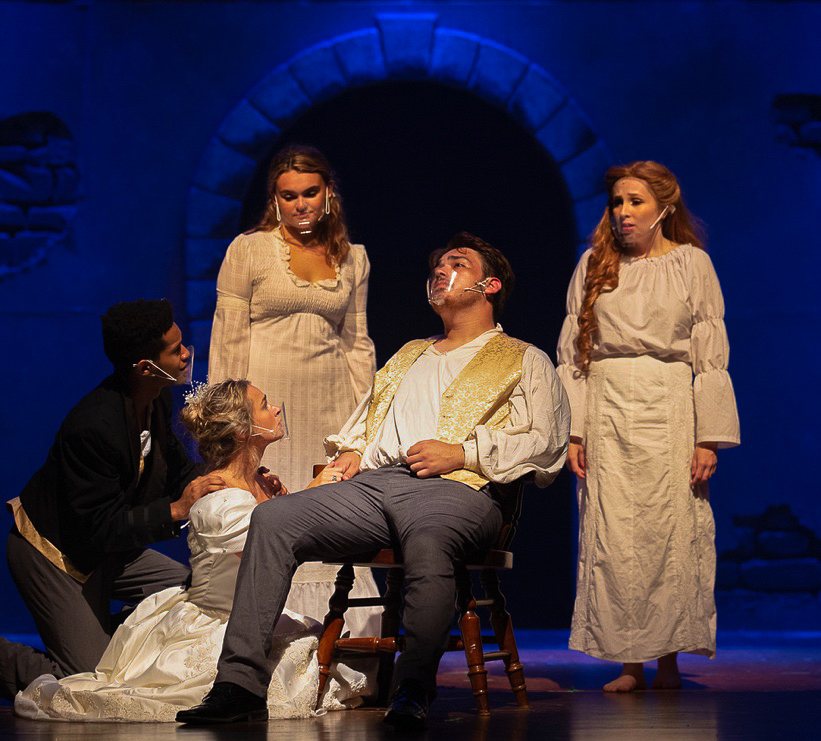 Senior Olivia Collet, left, and Isabel Mayer, left bottom, are among their fellow cast members during a dress rehearsal July 28. The actors were required to wear plastic face shields that wrapped around their head, covering their noses and mouths. photo courtesy of Olivia Collet

Senior Olivia Collet performed in a classic rendition of Les Miserables over the summer despite one minor detail: the actors performed wearing plastic masks to reduce the spread of COVID-19.

“We wore our masks to rehearsal, we had our temperature taken and we had to sanitize every hour,” Collet said. “The goal was to hopefully have masks off by performances, but then the mask mandate happened so we knew that that wasn’t going to be possible. But we still performed, and our masks were just clear.”

Having been in theater since she was 8 years old, Collet was more than willing to abide by the safety protocols that were needed to be able to stay active in the community; however, some of these restrictions proved to be an obstacle during performances.

“The mask was hard in the beginning,” Collet said. “It’s hard to sing when there’s something like that on your face, your sound is going to be muffled. I found myself focusing more on trying to pull [the mask] up to keep myself and everyone else safe while I was singing. That was a little distracting. The masks we ended up wearing for the show were like face shields and the only hard thing with that was that I could constantly see it, so when I’d look down it was like a makeup-covered plastic shield in front of me.”

COVID-19 has made necessary many social distancing protocols that bring drastic changes to the theater community. Head of the Saint Teresa’s Academy theater department Shana Prentiss has coped with these protocols by establishing a Reader’s Theater this fall instead of proceeding with the usual fall musical.

“I spent a lot of time in the summer thinking about how we can do this; still maintain safety and have an audience if we can,” Prentiss said. “I started initially looking for plays that could be staged in a way where they were separate… It’s almost impossible. So I thought, ‘Okay, let’s revamp. Let’s look at this in a different way.’ Reader’s theater is designed to be done this way; it’s designed to be people just sitting or standing with mic stands and a script in front of them. There’s no interaction. It’s all about using your voice to tell the story. And so I thought, ‘Oh, that’s kind of perfect.’”

St Teresa’s Academy sophomore Keeley Spencer hopes to be able to share her love of theater with others by participating in STA performances this year.

“I think the only issue that would come in is that people couldn’t see past the face shield because the spotlight would catch on it and send a glare,” Spencer said. “But the one thing I’m really worried about is not being allowed to have an audience. To me, theater is more about the audience being able to have a unique experience. I already get to be around the script and the stage and have heard the story, but for an audience member it’s all new.”

Despite the uncertainties of what this year’s theater program might hold, Prentiss is optimistic about the opportunities it will offer and encourages STA to have an upbeat attitude about this year.

“I hope that people get excited about this, it’s a different form of theater it’s a different form of performance but it’s one that I think is really fun,” Prentiss said. “It gives us a lot of opportunities. Normally I can’t look at a script with six people in it. I know on one level it’s going to be a disappointment especially for those kids that have been doing plays. It’s not gonna look the same, but I hope that they get excited about doing something different. I hope people come to see [the Reader’s Theater] because it’s a great form of storytelling.”

When asked about this coming year, Collet also agrees that it will hold multiple opportunities for advancements in the theater department and looks forward to being a part of the theater community again.

“One of the main reasons I came to STA was because of the theater department,” Collet said. “I had heard that it was a very open and loving community, and that’s what you want. It’s my favorite part of the year when the musical gets to happen and I get to stay at school for longer than I [normally] have to, but it’s what I love. I think it’ll be a different experience this year but I don’t necessarily think that being different will be bad. I think it’ll be a learning experience. I could dwell on it but instead, I’m really looking forward to seeing Ms. Prentiss. I think that she’s a Wonder Woman, and I’m very excited to see what she does and where she takes it and all the people that we get to invite to become our little family again.”