Sophomore year I adopted a mindset to say yes to every opportunity which gave me the confidence I was lacking. 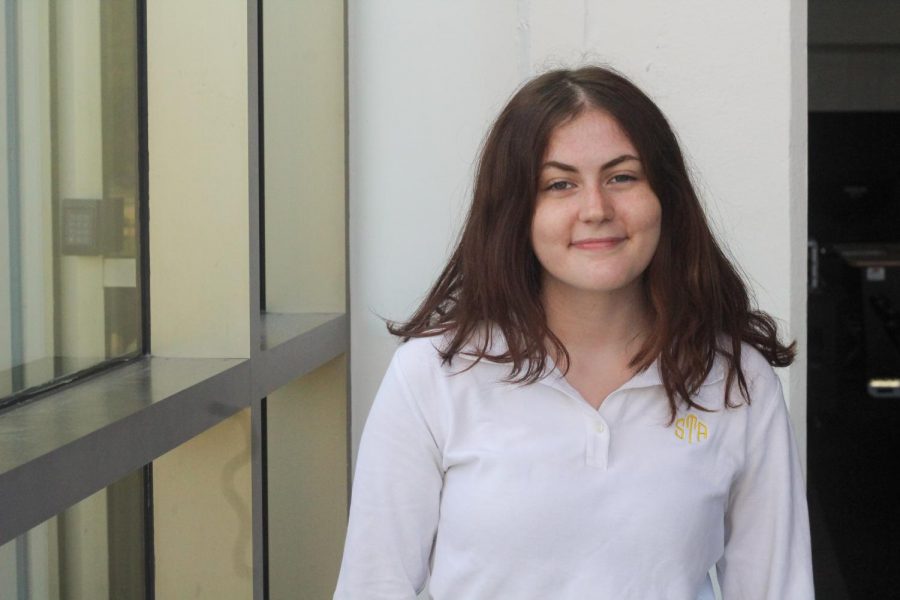 When I think about the Ella Norton who entered high school in 2016, she is almost unrecognizable to me. She was shy, scared to speak up and preferred to hide from the world rather than face it. Middle school was a little rough for me, I dealt with some bullying and I was scared of meeting new people. STA was a completely new environment for me, one where I didn’t know a lot of people coming in so I felt the need to remain in the shadows. Flash forward four years later and I am confident, self-assured and definitely not afraid to speak my mind. But how did I get here?

There’s a couple of reasons for the confidence I developed during high school. The first is STA itself. The all-girls environment and the mission of the school encouraged me to be a strong woman that didn’t doubt herself and for that, I am forever grateful. The second reason is newspaper. Beyond teaching me the joys of journalism, it also forced me to get comfortable with interviewing people I didn’t know and asking questions that were sometimes uncomfortable. And finally, around sophomore year, I developed this mindset of saying yes to every opportunity.

I had been reflecting on the cost of attending STA and decided I should capitalize on my education as much as I can. This meant being involved in every extracurricular I was interested in, applying for every award I had the opportunity to and going on as many adventures as I could. As this mindset progressed, I realized that the worst thing that could happen with putting myself forward was that I wouldn’t like it, and then I could stop if I wanted. This idea of saying yes to every opportunity changed my life.

This attitude especially comes to mind with newspaper. One cycle, my sophomore year, there was a feature story about Soundcloud rappers that intrigued me. I wanted to write it, but I felt scared because I had never done anything like it before. However, this seemed like a time where life was offering me an opportunity. So I decided to say yes, and I took the story. I was terrified that I would do a poor job and felt completely out of my comfort zone, but I poured my blood, sweat and tears into the story. It turned out better than I could ever imagine and I was, and remain, so proud of the results.

The story unlocked my passion for feature writing, leading me to apply for Editor-in-Chief and Missouri State Journalist of the Year. I knew there was a chance I wouldn’t win, but by saying yes to the opportunity, I gave myself a chance. The worst that could happen is that I could lose, and then I was no worse off. I didn’t win Missouri State Journalist but I did get the position of Editor-in-Chief. They both were a risk but they taught me to put myself out there and showcase my strengths.

I also began to apply myself in different areas at school, which led to accomplishments I am proud of. It’s also the reason why I participated in so many extracurriculars and clubs, like FBLA and Windmoor Literary Magazine. I was interested in FBLA freshman year but because it was out of my comfort zone and I didn’t know anyone involved, I didn’t apply. Sophomore year, I applied my “say yes” mindset and joined. While I still felt a little unsure of what I was doing, I ended up placing highly in my events, making new friends and memories. I also walked away pleased that I had tried something new.

Besides school, saying yes has had a huge impact on my social life. It  has led to alpaca conventions, seeing improv shows at Liberty High School, seeing live music in Tonganoxie, Kan. and creating relationships that I will cherish for the rest of my life. I used to be too scared to talk to people but now it has given me the confidence to talk to everyone, even strangers, which  has become one of my favorite things about myself. Even now, I’m using this idea to try and find a college roommate.

By changing my mindset to say yes to every opportunity, I realized that I could accomplish everything I could dream of. Every opportunity you take could lead to a thousand more and you will gain something, no matter what happens. Still, I feel it’s important to mention that sometimes it is necessary to say no, to protect your health and your energy. That is completely valid and necessary, only take on what you can handle.

So for all the people out there, who are like freshman year Ella, desperate to get involved in the world but feeling too scared to, I strongly recommend to take on this mindset of saying yes. It will lead to so many unique memories, and you could discover a passion you weren’t even aware of.