Senior Faith Andrews-O’Neal discusses her favorite STA memories and what motivated her to get so involved in the school community. 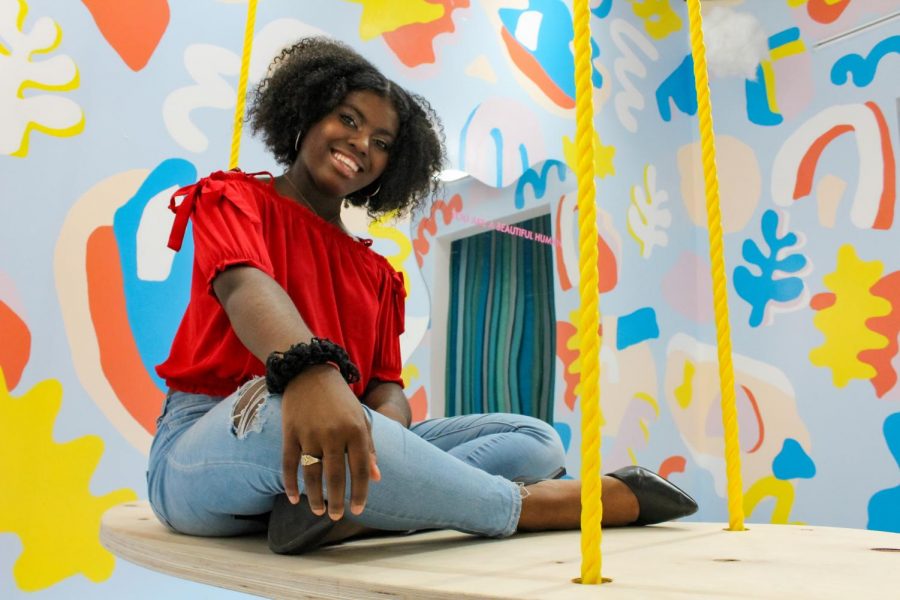 Senior Faith Andrews-O'Neal poses for one of her senior pictures at Wonder Wonder, a photography studio in Oak Park Mall Sept.28. Andrews-O'Neal is motivated to do great things in her school community because of how much support she has received these past years. photo courtesy of Amy Schaffer

Why did you originally choose to come to STA?

I chose STA because it was the best environment for me. I’m Christian and I enjoy having that as a foundation. I think the idea of going to an all-girls school, while it was scary at first, is something that actually ended up being a big draw to me and my family.

What motivated you to get so involved at STA?

There’s been a lot of support from my family sacrificing to help with tuition, and I have benefactors from St. Paul’s [Episcopal Day School] as well as STA which has really contributed to my education. For me, my largest motivator is just being able to offer my support in any way, because this school and the community around STA has given me so much support, whether it’s financially or my teachers or counsellors helping me. They’ve really helped me to become the person that I am. So anything I can do to contribute even a portion of what’s been given to me motivates me to get more involved here.

How has your experience on Dart staff been?

I found some of my closest friends in the entire world on staff. One of the things on staff that’s really stuck out to me is that you’re able to develop your skills as a writer and then get out into the world and explore for yourself. You’re getting out into the community in a way that’s unlike anything else in our school environment. You get assignments basically telling you to go out and explore the world and figure out what it means and interact with people you might never interact with otherwise.

Why did you become an opinion editor?

I became an opinion editor because I love my opinions! I’m just kidding. I felt that was the area of writing where I felt the strongest. So, sophomore year I had my blog and I realized when I was writing reviews and, of course, my two mandatory columns that that was the area I felt most comfortable and confident in. It was just the natural next step to try and get a leadership role in that field because I felt I could offer advice in that area. It was the type of journalism I felt most drawn to.

Why did you start your blog, Accessible Activism?

I find myself just very, very passionate to say the least about activism and advocacy. I’m in a position that not a lot of people of color, especially working class people, are able to be in, and my blog gives me a platform. I think what drew me to my blog is the idea that I can speak up about all these things that really matter to me, and I can do so in a way that’s productive and able to inform as well as reach people in a way that, like, a New York Times article might not because those aren’t written for people our age.

Why did you run for senior class representative?

I was a sophomore class rep and a junior class officer. I knew I wanted to stay involved in this way, and I have a lot of school spirit, as you can probably tell. I just really, really love the school and I saw how much I could connect with administrators and help students. Also, on “Glee” Brittany Pierce was senior class president and performed a Beyoncé dance to make it happen. So that was also a big draw and I pretty much always wanted to be senior class president.

Have you decided on what college you’re going to?

I will most likely be attending Columbia University in the city of New York. I want to major in political science and minor in biology or chemistry.

Do you have a particular career after college in mind?

Yes! With political science I would love to go into journalism. There’s no specific major for journalism there until grad school, but that’s what I’d love to do because of my experience on Dart. If not journalism then law, but I’m not sure of what field yet. I also kinda want to be a doctor. I mean, I’ve always wanted to be a doctor, especially a pediatric oncologist. It’s one of those three.

Do you have any favorite STA memories or traditions?

Oh, so many. One thing I think is super special is advisory time. I mean, I love my advisory and I always have but I didn’t realize how important that was to me until all of this. That sense of togetherness with people from all grades, from the seniors to the little freshies, is something I really, truly value now.