While sports across the world are postponed due to COVID-19, this extra time at home is an opportunity to catch up on some classic sports movies. The Dart compiled a list of five must-watch movies to see, all of which feature strong female athletes at the center. 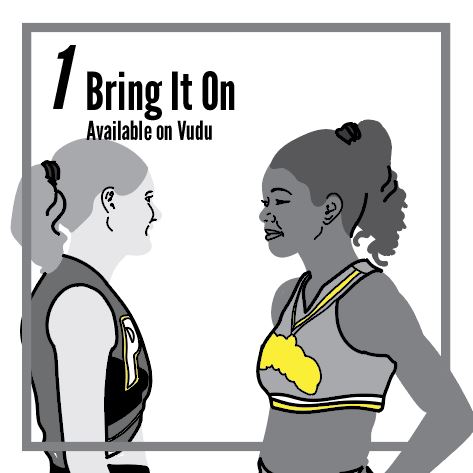 The global spread of COVID-19 has majorly impacted the sports world. The NBA suspended its season March 11, the Tokyo Olympics were postponed to 2021 and the spring sports season for STA athletes was cancelled.

Although there is no way to fully make up for the loss of the sports seasons and coverage that would be taking place right now, there are multiple movies that capture the competition and joy that these sports bring both athletes and fans. These five movies all feature strong female athletes that possess a passion for their respective sports that helps them overcome any obstacles. Watching these movies during this time of social distancing serves as a reminder of the special way that sports connect us.

This movie is a classic and never disappoints. Anyone who has competed for a dance or cheer team understands the fierce passion that these athletes hold for their routines. In “Bring it On,” newly-elected team captain Torrence is thrilled to lead the Toro cheerleading squad from Rancho Carne High School in San Diego to their sixth national championship win in Daytona. Torrence never expects to discover that the former captain stole their cheer routines from the Clovers, a cheer team from East Compton that is determined to compete this year. The Toros and Clovers must face off in this movie to claim the winning trophy, and it is a tough competition that requires each squad to bring their all. Although it came out in 2000, it wasn’t until early this month that I watched it for the first time. The movie is just over an hour and a half, and it combines comedy, competition and even some romance for a fun movie night at home. This movie can be found on Vudu.

“Bend it like Beckham” is another classic movie that champions talented female athletes who are driven by their love of soccer. Women in sports know that it is possible to be overshadowed by the attention given to male sports and are expected to not like sports as much as men. For soccer stars Jess Bahmra and Jules Paxton, the dream of playing professional soccer outweighs the family pressure to find other interests. Jess comes from a strict Indian family that disapproves of her playing organized soccer and Jules’ mother wishes she would spend more time shopping than improving her skills. When Jules sees Jess playing soccer out of her parents’ watchful eyes, and recognizes her natural talent, she convinces her to join her semi-professional team for young women. Throughout the movie, Jess uses elaborate excuses to get to soccer practices and games because of her passion for the sport. This movie showcases the drive and commitment both Jess and Jules have for soccer that many young female soccer players can relate to. It is inspiring to watch this movie and see both Jess and Jules realize their potential and chase their dreams. This movie can be found on Hulu.

“I, Tonya” brings drama and comedy to the true story of an infamous sports scandal that took place in 1994. The movie follows the rise of figure skater Tonya Harding, the first American woman to complete a triple axel in competition. Tonya grows up without the lifestyle that America had come to expect of female figure skaters, but she doesn’t let anything stop her. She becomes a national champion and Olympian. Her world comes crashing down when her husband Jeff and bodyguard Shawn orchestrate a poorly executed plan to scare her biggest competition, figure skater Nancy Kerrigan, by hiring a friend to bash her knee. Tonya’s association with the scandal tarnishes her reputation. Although I had never heard of this scandal until the movie was released in 2017, it is a fascinating story told from multiple perspectives in this movie. Tonya’s ability to overcome the many obstacles she faces in order to figure skate is incredible. This movie can be found on Hulu.

“Stick It” is the story of the comeback athlete. Haley Graham is a rebellious teenager who was once one of the best gymnasts in the United States. She left the world of competitive gymnastics after walking out on her team during the World Championship. After she accidentally causes damage to a development house on her skateboard, a judge sentences her to attend an elite gymnastics academy. Haley is reluctant at first to reenter gymnastics, joining a team resentful of her reputation, working under a strict coach and tackling a big learning curve of developing her skills again. Motivated to redeem her reputation and fulfill her sentencing, Haley reveals her natural capability and begins to bend the rules of gymnastics when she notices the scoring is flawed. “Stick It” shines a spotlight on daring athletes who believe that they can come back from any obstacle. This movie can be found on Vudu.

“Center Stage” is a classic movie about an underdog driven to overcome what her doubters think. The movie centers around Jody, who is excited to make the cut for the American Ballet Academy in New York but doesn’t expect the criticism she receives. Jody is cited as having bad feet and turnout from the beginning. The ultimate goal for the 12 young dancers accepted into the program at ABA is to be offered a coveted spot at the American Ballet Company. The pressure and competition Jody and the other dancers face to earn a spot is combined with ensuing friendship and romantic turmoil. Although Jody is led to believe that ballet is not for her by high powered instructors, she befriends other dancers and instructors who help her see that her passion for dance will take her far. “Center Stage” is not just a movie about ballet, but also a movie about the relationships and enthusiasm that help people overcome setbacks or doubters to realize their potential. This movie can be found on Netflix.