Due to the presence of COVID-19 in Kansas City, St. Teresa’s Academy halted in-person classes after March 12. Individuals across the city quickly began practicing “social distancing” to stop the spread of the virus. To stay in touch with their friends while “social distancing,” St. Teresa’s students began spending time together in unconventional ways. 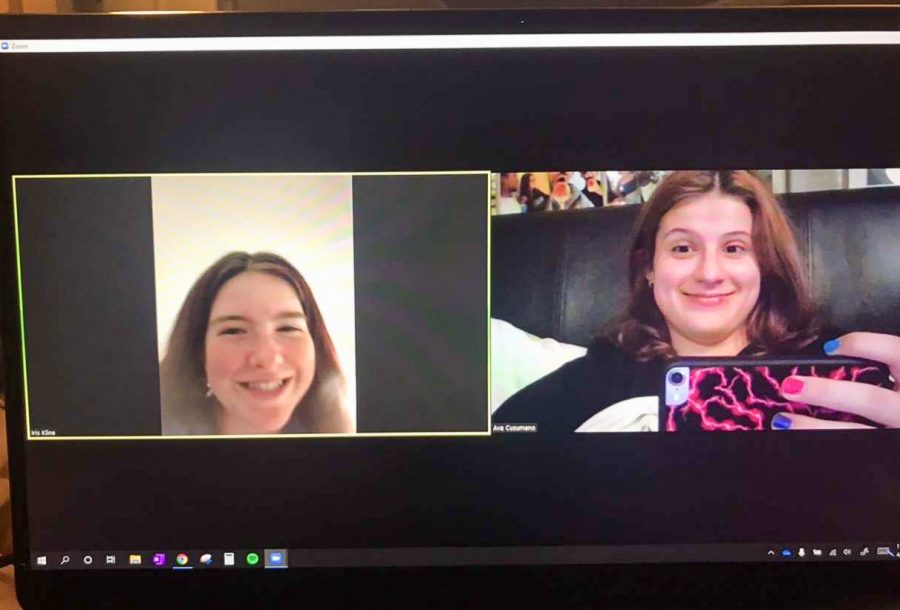 Sophomores Iris Kline and Ava Cusumano catch up over a zoom facetime call Apr. 6. Kline and Cusumano use zoom as one way to communicate with their friends at least a few times a week. photo by Katie Massman

Bored and missing her friends, junior Ali Madden was scrolling through TikTok when she came upon a unique concept: meme presentations. Madden instantly presented this idea to six of her friends, who then pursued the concept during a lunch period.

“They are basically just little presentations, about five minutes long, that can literally be about anything that we think is funny,” Madden said. “We did them over Zoom so we would each share our screens so that way everybody could see them, and we just went through the slides.”

Madden believes these presentations fostered humor during a stressful time.

“My friend Hayley Melland did her presentation on the best and worst Justin Bieber haircuts,” Madden said. “Mine was about how Amy Dunkin is the best Disney character in the Disney universe. I thought it was funny.”

Recognizing the importance of face-to-face connection, even through a screen, Madden and her friends plan to share these meme presentations every Thursday.

“We’ll have something to look forward to a little bit,” Madden said. “I think it definitely just shows our humor in a different way because we’re not there to feed off of one another’s humor. We’re just kind of like, ‘this is what I think is funny, so here’s what I’m going to show you guys.’”

Taking her daily Zoom chats with friends a step further, junior Sydney Melland initiated a “social distancing hangout” with three of her classmates.

Melland believes their time together in person solidified her friendships despite the hardships of social distancing.

“I think talking with someone in person is way different — it just feels more real to hangout in person,” Melland said. “It’s weird not seeing them every day but we are still in contact with one another.” 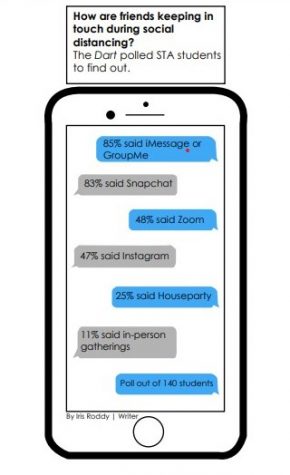 In addition to seeing her friends in person, which she hopes to do again soon, Melland has also been virtually speaking with her friends every day during lunch and activity period.

“I think I would go crazy if I wasn’t in contact with my friends,” Melland said.

Junior Grace Patenaude also held a lunch Zoom meeting with her fellow “Men on Boats” cast members — Patenaude played John Wesley Powell in STA’s February production. The students had not seen each other since before spring break and wanted to catch up on the happenings of each others’ lives.

“We started out saying how much we missed the show and shared some funny pictures from it,” Patenaude said. “We said how much we missed each other and the seniors because they are going to be leaving. And then we just talked about random stuff.”

Patenaude also believes Zoom offers the opportunity to spend time with friends who she may not have initiated a hangout with outside of school.

“I am definitely friends with those people, but I don’t know if we would have gotten together outside of school,” Patenaude said.

“We’re all kind of getting that space to look back and see, ‘okay, what do we feel like we could do better with ourselves and how we could treat one another better,’” Madden said. “We’ve been showing that when we are communicating, that we’ve taken that step back for ourselves and just kind of been like, ‘I realize like maybe I was a little bit mean.’ So, it’s just helped a lot with realizing what me and the other girls in my friend group want to give to everybody else.”

To maintain and even improve friendships, Patenaude advises reaching out to friends during the time of social distancing.

“Just don’t be afraid to reach out through any means, Zoom, text, whatever,” Patenaude said. “I think Zoom is nice because you can see everyone and that’s different than just texting, but any method is good to just keep that connection going.”

Madden agrees contacting friends is vital, now, and even after social distancing is no longer necessary.

“For me, I hate reaching out because I’m always like, ‘oh God, they’re probably going to think I’m annoying,’” Madden said. “But just literally just reaching out is going to help a lot. Just checking up, saying like, ‘hey, how are you doing? How is quarantine treating you?’ That little thing can go a long way and that can start a conversation.”