Interactive Map: Everything you need to know about Kansas City during COVID-19

The Dart is compiling a map of testing sites, hospitals with known cases, restaurants open for takeout and more. The map will be regularly updated as needed. 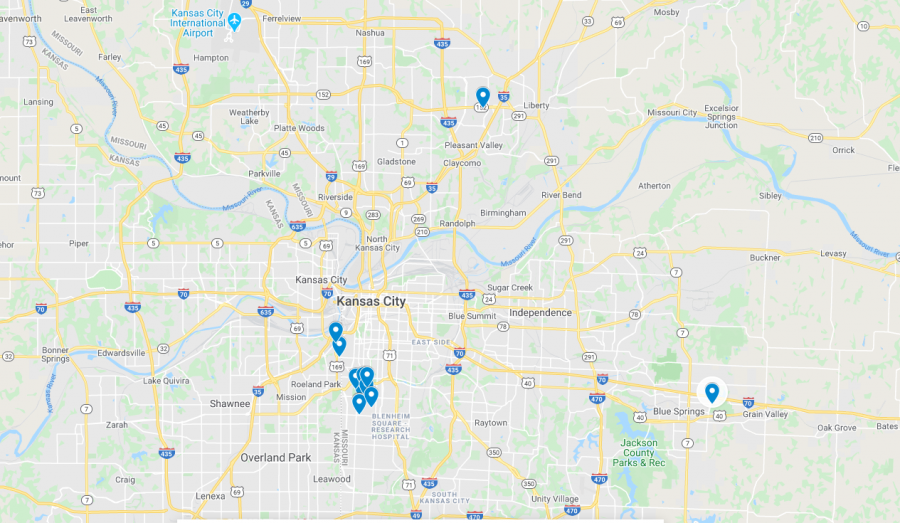 According to the Missouri Department of Health and Senior Services, there are 5,941 cases of COVID-19 in Missouri and 189 deaths as of April 22. The Kansas Department of Health and Environment reported 2,025 cases and 107 deaths as of April 22. According to The Kansas City Star, Missouri Governor Mike Parson said that he hopes Missouri will be able to test 40,000-50,000 people daily, but this goal won’t be achieved until at least May 4. According to KMBC News, Missouri Attorney General Eric Schmitt filed a lawsuit against the Chinese government April 21 for suppressing information and denying the danger of COVID-19.

As of April 16th, Mayor Quinton Lucas decided to extend the stay-at-home order until May 15. This will extend Lucas’ original stay-at-home order three more weeks. According to The Guardian, there are currently 639,499 confirmed cases of COVD-19 in the United States. Specifically in Kansas City, Missouri there are 371 reported cases and currently 11 deaths. As the stay-at-home orders continue to be in full effect, the number of 911 calls for domestic violence has spiked 22% in comparison to this time last year. According to The Kansas City Star, the reported number of domestic violence cases from January to the end of March went from 358 to 409.

According to the Missouri Department of Health and Senior Services, Missouri has 4,686 cases of COVID-19 as of April 14. The state added 348 cases and 19 deaths April 14th. The total number of deaths in Missouri is 133. In Kansas City specifically, there are 346 cases and 11 deaths as of April 14. Jackson County has reported 237 confirmed cases and 6 deaths. According to KMBC 9, the state of Missouri is not releasing totals for how many people have recovered from COVID-19, but Jackson County has reported two. According to KMBC 9 News there are 1441 cases in Kansas as of April 14th and 69 deaths.

According to data from the Missouri Hospital Association and the Kansas Department of Health and Environment, as of April 13th, there are 1,376 confirmed COVID-19 cases in Kansas, with 62 deaths, and 4,388 cases with 114 deaths in Missouri. According to KMBC News, Mayor Quinton Lucas claimed in an interview Monday that he is “almost certain” the stay-at-home order currently in place for the metro will extend into May. Lucas does not have a specific date that the order will extend to, but he said that “what we need to do is try to unify to the extent that we can.”

As of April 9th, St. Teresa’s Academy announced that the school will not open for the remainder of the 2019-2020 school year. According to the Centers for Disease Control and Prevention, there are 1,076 reported cases in Kansas, and 3,327 cases in Missouri. Johnson County, KS reported 244 cases with 11 deaths. Jackson County, MO reported 162 cases with 4 deaths. According to CNN, the Federal Reserve announced a $2.3 trillion round of loans that includes support for small businesses, consumers, states, and municipalities.

According to the Missouri Department of Health and Senior Services and the Kansas Department of Health and Environment, there are 3,327 COVID-19 cases in Missouri and 1,046 cases in Kansas. Kansas lawmakers overturned Governor Laura Kelly’s order restricting the size of religious gatherings. The Institute for Health Metrics and Evaluations estimated that Missouri’s peak number of deaths will occur on April 21, and Kansas’s peak will occur on April 20.

As of April 7th, there are 845 confirmed cases of COVID-19 and 25 deaths in the Kansas City metropolitan area. According to the Kansas Department of Health, there is a 9% positive testing rate. The United States Department of Health and Human Services announced that it has awarded $27.7 million to 29 community health centers in Missouri and $15.4 million to 19 community health centers in Kansas. Several of these clinics serve those for whom medical treatment presents an economic strain during this difficult time. Kansas Governor Laura Kelly has limited religious services approaching this Easter Sunday, stating that all church services and funerals have a maximum gathering limit of 10 people, effective Wednesday. This follows MO governor Mike Parson’s order banning gatherings of more than 10 people, which went into effect Mar. 21.

April 6th brings an increase in the number of total coronavirus cases in Missouri totalling at 2,367, according to the Missouri Department of Health and Senior Services. There are 139 patients who have tested positive for coronavirus in Jackson County and 175 patients who have tested positive in Kansas City. While the metro-wide stay at home order continues to be in effect, the city’s priority crime calls including shootings and armed robberies has dropped. Comparing March 2019 to March 2020, the priority crime calls have decreased 6.3% according to the Kansas City Police Department.

April 2nd, Mayor Quinton Lucas announced that Kansas City will spend $80,000 to house the homeless who tested positive for Covid-19 or show symptoms, according to the Kansas City Star. Thirty units will be provided at the Rodeway Inn where residents will also receive meals and social welfare services. This ordinance will also provide medical supplies and create spaces for people who do not have a place to isolate. The ordinance plans to help homeless agencies across the city that do not have the resources or space to isolate people. In Johnson County, the only space for the homeless is a temporary winter shelter.

As of April 1st, approximately 19,430 patients have been tested in Missouri, resulting in 1581 cases and 18 deaths according to the Missouri Department of Health and Senior Services. The largest outbreak of cases is confirmed to be in St Louis, amounting to 781 cases while Kansas City has 128 cases at the moment. BNO Newsroom has reported that in the past 24 hours, the United States has reported 26,885 new cases and 1,029 deaths from COVID-19. This brings the total amount of cases in the United States up to 215,429, the most out of any country.