McLains’s Bakery, Mud Pie Bakery, and Dolce Bakery have been selling baked goods to Kansas City locals for a long time, some celebrating 75 years. Their efforts to accommodate the community help bring people together to celebrate life’s moments. 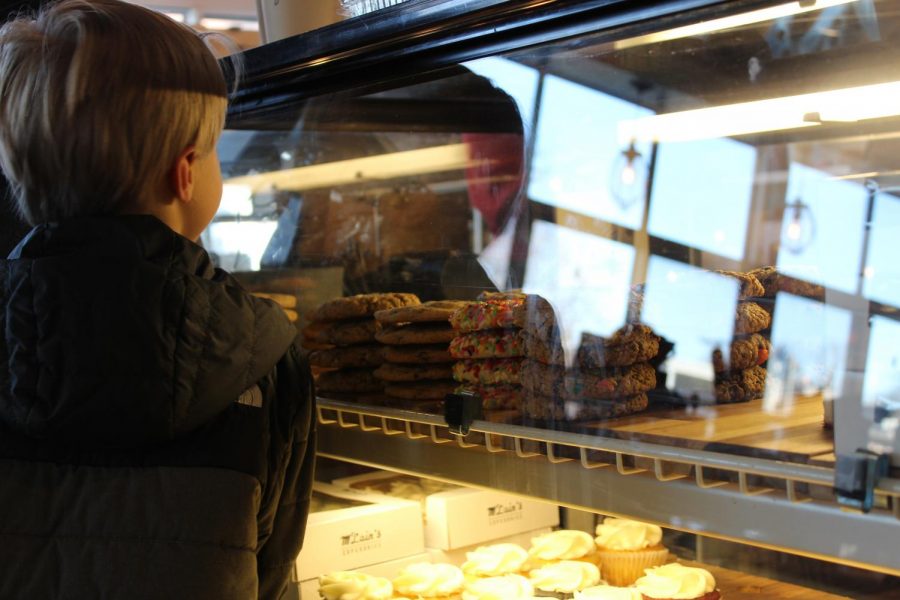 A child admires the cookies on display at McLain's Bakery Feb. 21. McLain's cookies come in a range of sizes and their flavors alternate every day. Photo by Beatrice Curry

Kansas City thrives on baked goods. Whether it’s breakfast, catching up with friends, or celebrating anniversaries, bakeries find a way to fit the needs of the community.

“We just try to evolve as we go and try to do what we do as best as we can,” owner of Mud Pie Ashley Valverde said. Mud Pie Vegan Bakery and Coffeehouse has been part of the local Kansas City community since 2011.

Mud Pie noticed that there weren’t enough bakeries to serve the vegan community and wanted to do something to better serve them.

“We became vegan about a year earlier and we’re passionate about that and felt like Kansas City needed some options so that more people could enjoy [baked goods],” Valverde said.

Their accommodating menu has helped them become part of the Kansas City community.

“We are known for our house-made vegan milks, our vegan baked goods and for being the first all-vegan bakery and coffee shop in Kansas City,” Valverde said.

One of Kansas City’s oldest bakeries, McLain’s Bakery, is celebrating 75 years of serving the Waldo area since it opened in 1945. They pride themselves on their sense of community and coming together.

“One of the things that is really core to who McLain’s is and what we’re trying to promote is a place that people can gather and so we really encourage the community to think of us as a place where they can come and make life moments here,” sales and marketing director for McLain’s Bakery Kasey Cacy said.

McLain’s bakery tries to provide intimate relationships with their staff members in addition to  serving customers.

“A lot of the staff know the owners, they see the owners in the stores, and it’s a very well connected community of staff that are here and so I think that it really creates that culture where people feel safe and feel at home and feel valued,” Cacy said.

Though McLain’s Bakery has since opened three other locations in Overland Park, Waldo, and Lawrence, it has remained true to its Kansas City roots and original recipes.

“Celebrating 75 years, we have pulled out some of our old recipes that we have just on pieces of paper,” Cacy said. “We have things that have been passed down from the original owners but then we also really like to make sure that we’re staying relevant with the current market today so we really try and find outlets to make sure that our employees feel that they can be creative in terms of coming up with new product or ideas that we can sell and take to the market.”

Dolce Bakery, opened in 2008 in Prairie Village by Erin Brown, has remained sincere to Erin’s baking origin throughout the years.

“[Erin] started to bake with her aunts and grandmother when she was a young child and then she later went to culinary school. For Dolce, the recipe that really started it all was her Aunt Cindy’s cinnamon roll recipe,” director of sales and operations for Dolce Bakery Kathleen Cussen said.

To this day, Dolce bakery has stood behind that cinnamon roll recipe and it has brought them success.

“We’ve been voted best cinnamon roll in Kansas City here and there over the past 12 years,” Cussen said.

Behind the cinnamon rolls, plenty of work goes unseen at Dolce Bakery.

“There are no shortcuts, [Erin] uses the highest quality ingredients that make sense for the product, whether it be a cake or a cookie or any detail; what type of flour, what type of sugar, what type of vanilla,” Cussen said. “She’s meticulous about it tasting the way she wants it to or the way it should or the way she remembers it from childhood and she will adjust and finesse the recipe until she gets it just the right way.”

Local businesses provide a more intimate shopping and dining experience. They are able to level themselves with their customers through authenticity and face-to-face experiences.

“I really believe that local business is a way that you can change communities, just in being able to really understand the needs of the community and what the desires are of this community,” Cacy said. “Because [McLain’s Bakery’s team] are local to Kansas City, and are still fairly small, we get some flexibility with being able to cater to those things.”

In addition to being supported by the community, local businesses often find ways to give back. These bakeries have found their own way to treat the community and encourage togetherness.

“We consider ourselves a great partner with charitable organizations, schools, things like that we’re always happy to donate baked goods or gift certificates or things like that to help support whatever events that are happening in Kansas City,” Cussen said.