STA student bands explore their own music styles and provide an informal outlet for creative performance. 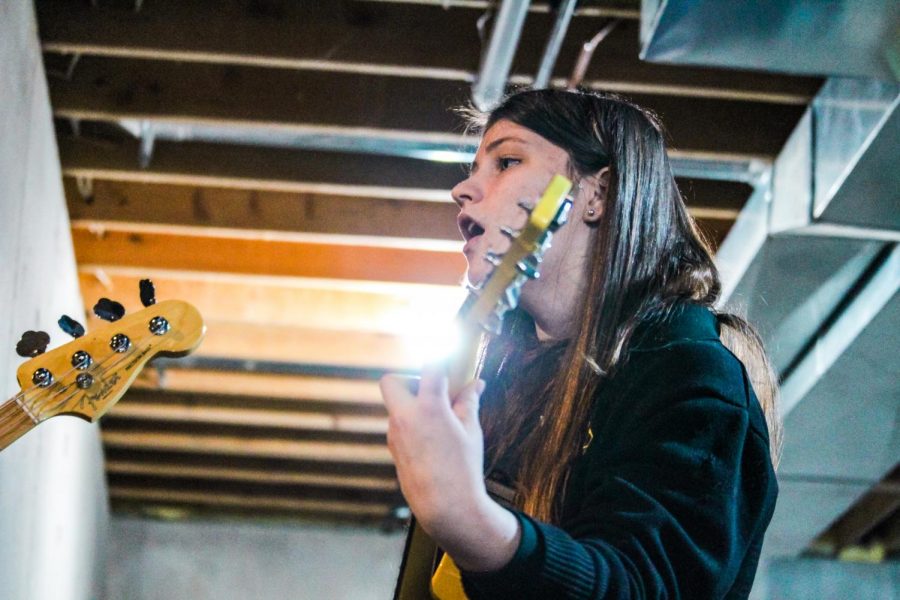 Senior Kylie Schuster sings and plays guitar while practicing with “Yellow House” in her basement Feb. 12. Schuster is the only member of her band to attend STA, so rehearsals are held outside of school. photo by Amy Schaffer

For senior Kylie Schuster, knowing she’s made music with her fellow bandmates that they can be proud of is a source of joy.

“I think it’s a lot of bands’ dreams to succeed and make it big, but I think if I always have something to go back to and just people to make music with, I’d be happy,” Schuster said.

“Writing songs, I tend to write lyrics first, and then I’ll add a guitar part to it if I can, and then Kenzie and Elizabeth will figure out parts for themselves, and then Alex usually does an overlay of the guitar, riffs or harmonizes with his guitar,” Schuster said. “And so I think just the way it comes together, it ends up being kind of a weird amalgamation of things, as opposed to like a set style.”

Yellow House meets to practice about once a week, on Wednesdays at Schuster’s house. The group has performed numerous times, including at the Nelson-Atkins Museum of Art.

But to Lee’s Summit West High School senior Elizabeth Sinnerty, Yellow House’s drummer, the best part of being in the band isn’t the performances they do.

“Every single practice, or every time we’re doing something with the band, I’m getting to do it with my best friends, because Kylie, Kenzie and Alex are all pretty much my best friends,” Sinnerty said. “And it’s just, I don’t know, really enjoyable for me to be able to do something that I enjoy doing so much with people that I enjoy being with, so that’s probably my favorite part, is the people I get to do it with.”

In junior Kelsey Raymer’s band Copyright, on the other hand, semi-monthly practices involve a video call to include all the members, since one is away at college. Raymer and the two other bandmates that make up Copyright play the guitar, drums, bass and sing.

“We play what I would consider ‘garage rock,’” Raymer said. “It’s kind of like Cage the Elephant, except recorded on bad recording material so it’s kind of distorted.”

While Raymer says the group is laid-back and just for fun, she has goals for what she wants the band to achieve.

“Hopefully at some point [we’ll] play something live, get at least five songs written out and recorded so that we have the sheet music for them and the lyrics for them and actually a recording of what it sounds like when we’ve played it through, and [we’ll] make a song that is at least three minutes long,” Raymer said.

Schuster also enjoys the relaxed nature of being in her band and is not concerned about defining the future of the group.

“Maybe, you know, we can try to make things work in college, but I think mostly that we just get to put out something that we’re proud of,” Schuster said.

To her, the most important thing is producing music that they can take pride in.

“We’re working on writing more music now, we’re trying to find a place to record,” Schuster said. “And I think if we could just get music out there that we’re happy with, and we’re proud of, then I would be content with that.”