Plays offer students the opportunity to challenge their acting abilities in different ways than musical productions do. 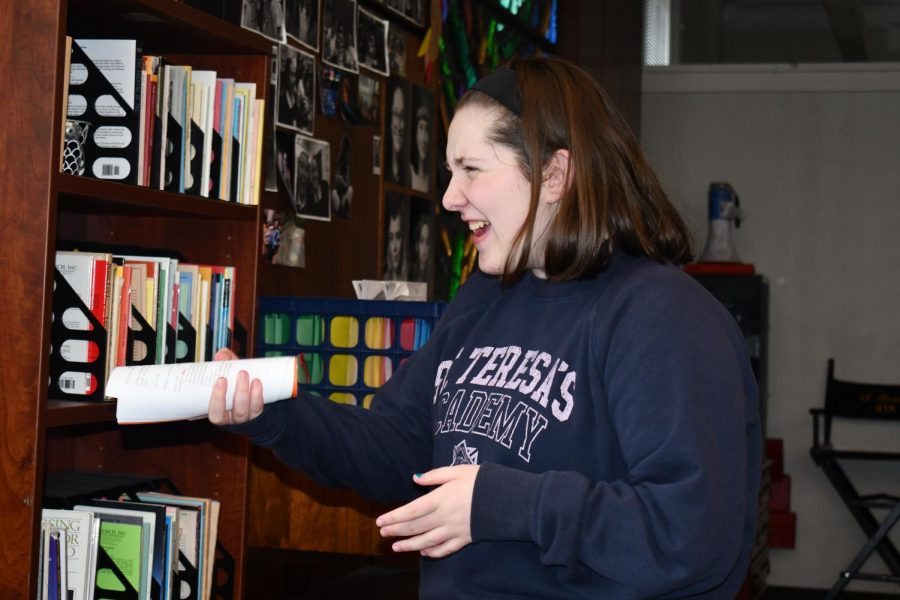 - Junior Gracie Swanson laughs as she practices her lines Jan. 27. Swanson will appear in STA's upcoming production of "Men On Boats." photo by Beatrice Curry

Senior Grace Gaume had no experience with theater until she was on stage, reciting the lines of a 19th century sailor in front of every hopeful student auditioning for this year’s play “Men on Boats.” She never imagined how difficult it would be to stay in character while fighting back the anxious feeling of sharing her interpretation with an audience.

“It’s hard to keep in character and not be so shy,” Gaume said.

Gaume dreamt of being an actress when she was younger, even auditioning for a couple commercials. However, it wasn’t until her last year of high school that she decided to work up the courage and explore acting again through the play.

“I don’t think there is going to be another point in my life where somebody says, ‘I’m having this play, come act in it,’” Gaume said. “I also felt like I was really in my comfort zone this whole year because I’m a senior.”

Gaume chose to try out for the play over the musical largely because she does not have any singing experience. She also thought the smaller cast size and more time focused on only acting skills would develop her ability to perform. However, the gender swap and sailing action in “Men on Boats” has challenged Gaume more than she expected.

“When you see people acting on TV, a teenage girl is going to be playing a teenage girl,” Gaume said. “When you’re auditioning for a play, you’re in this scenario playing someone that you can’t really relate to at all.”

Developing acting skills is one reason theater teacher Shana Prentiss encourages students who may gravitate toward musicals to build transferable skills through acting in the play.

“I tell all of my [theater students] that you should be doing plays, even those kids that think they’re pure musical theater,” Prentiss said. “The basis of all theater is acting, and where you hone those skills is by acting. Students that think all they have to do is musicals all the time, they’re missing out on the opportunities of becoming stronger actors.”

Senior Kylie Shuster is one of Prentiss’s students who elects to participate in both the musical and play every year. Although she sings for the choir and her band, acting without music has taught her how to better integrate herself into scenes.

“Learning how to react and be on stage is very challenging,” Shuster said. “With smaller casts, everything is noticeable on stage and you’re constantly moving the show in motion whether you know it or not. Prentiss doesn’t stage everything to a tee so that every movement you have is choreographed — she allows it to happen naturally.”

Not only does Prentiss think that plays give students time to improve their acting, but she also believes that the structural difference in plays allows students to explore a more complex script.

“I think with a play, you can often get more depth to the story, depth to the character, because you don’t have this other vehicle of the music and the dancing,” Prentiss said. “As far as the actual art of theater, I think it’s a little more interesting in a play.”

Even though acting without music can prove to be a challenge, Shuster views her roles in the plays as opportunities to dive deeper into storylines and learn lessons from them without the convenience of music.

“When you come to learn characters, you realize that they are normal people,” Shuster said. “Each play has something different to offer in the character that you’ve done in terms of they might have personality traits that you don’t have. You really get to see how each person may play a character, what traits each person notices about a character and how you would play it versus how someone else would play it.”

Although Gaume initially struggled to connect to her character, the more she has watched the satirical and historical story unravel, the more eager she is to share it. She feels grateful that she auditioned for the play and can help contribute to the ebb and flow of each scene.

“Acting in a play is a good way to get out of your comfort zone and it’s kind of your own space to be creative,” Gaume said. “It feels like a once in a lifetime opportunity.”