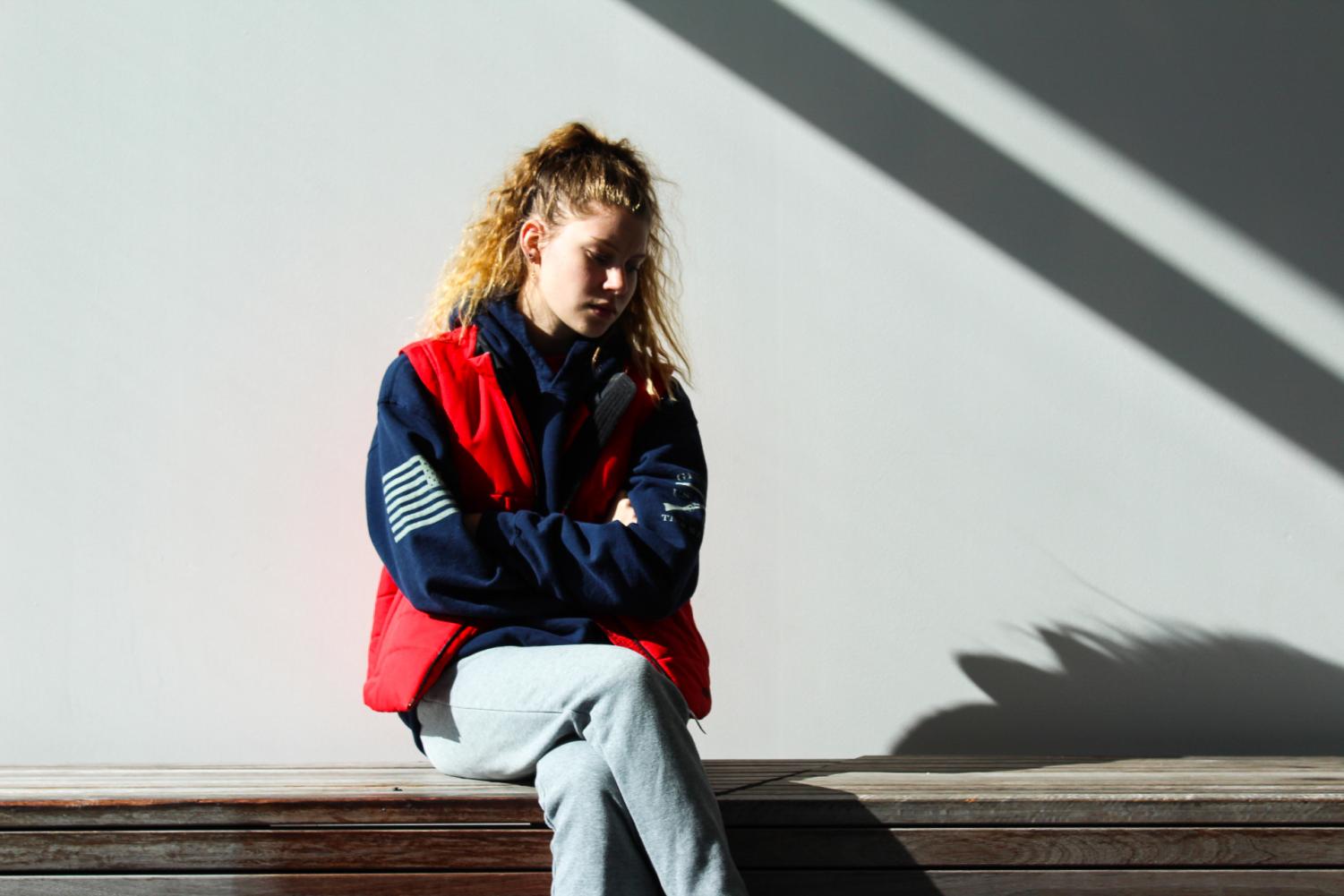 Content Warning: This story includes discussion of mental health disorders. Reader discretion is advised. According to a national survey on Drug Use and Health which polled 200,000 adolescents, the rate of those reporting symptoms of depression increased 52% from 2005 to 2017. Clinical psychologist Larry Neiters, who has practiced in the Kansas City area for 44 years, believes this rise may be due to increased usage of social media, which can be linked to mental health disorders. Additionally, after graduating from St. Teresa’s Academy and pursuing a psychology degree, marriage and family therapist associate Caroline Saia thinks certain people are predisposed to mental health disorders due to their genetics, and their family environments can increase this risk. Since starting her work in 2004, licensed family therapist Ashlie Lester agrees and notices U.S. legal policies regarding mental health affecting society’s treatment of those who are suffering, further perpetuating mental illness. To combat the effects of mental disorders on youth, teenagers across the U.S. promote mental health education and fundraise for causes such as suicide prevention. The Dart sat down with three Kansas City high schoolers to explore how they address widespread mental health struggle with community impact.

by Aspen Cherrito and Sophia Durone

A group of newly acquainted teenagers huddled around heaters on the rooftop of Chicken and Pickle for All Hands In KC Nov. 3. Chatting about their past weekends and the results of the pickleball tournament earlier in the evening, the high schoolers quickly finished their conversations as therapist Julia Harkleroad grasped the microphone.

“Something that I’ve been waiting for is the teens in the community to step up and make their mark,” Harkleroad said. “To not wait for the adults to do it.”

In May 2019, Rockhurst High School senior Christian Taylor began planning All Hands In KC, an event in the fall promoting mental health education and raising money for suicide prevention. Taylor believes his fundraiser helped others like himself who have struggled with their mental health, affirming it was an event “for teens, by teens.”

“I put it together primarily because I’ve had some of these feelings [of struggle] before in middle school,” Taylor said. “A lot of people have these all the time and I feel like there’s not enough being done that teens can relate to.”

Taylor believes the Kansas City community has wanted an event like his for years.

“The general reaction is, ‘Wow, I’ve been looking for something like this to be put together, I just haven’t had the motivation or didn’t know where to start,’” Taylor said.

According to Taylor, education about mental health is vital for adolescents and teenagers today. Yet according to Education Dive, Virginia, Florida and New York are currently the only states with mandated mental health education for K-12 students. Due to such statistics, Taylor interviewed therapists and activists across Kansas City for his event, choosing those he believed would provide the most beneficial information when addressing mental health struggle.

“When someone texts you and says, ‘Hey, I’m struggling,’ a lot of us don’t know how to respond,” Taylor said. “We need to be prepared on how to respond because at the end of the day, we could be helping to save those peoples’ lives.”

Along with preparing the public for situations such as Taylor’s, clinical psychologist Larry Neiters believes that educating the community on mental health issues can promote its destigmatization.

“Education is going to presumably create a greater deal of empathy and compassion where people can feel their suffering along with somebody else,” Neiters said. “I think education is paramount because if [society] understands, [those who are struggling] realize they have a lot of helpful directions.”

“A lot of those who are suffering are really needing to unload and needing an open ear without judgment,” Neiters said. “What needs to come through is, ‘I care about you.’”

Senior Janey Stevenson thinks conversations about mental health should be casual, so she often initiates mental health discussions with her peers and community members.

“I am always really open and honest with people — everyone around me, whether they’re my close friend or not,” Stevenson said. “I hate the stigma around mental health being like it’s such a personal thing and [you should] handle it on your own. I’ve always believed that keeping yourself healthy is primarily an individual thing, but it’s a group effort.”

These conversations do not always come easily.

“Naturally, with my peers and my friends, it’s a little bit harder to get under the surface just because we’re all in this very vulnerable spot of being in high school where mental illness is becoming a very real thing,” Stevenson said.

After personally struggling with her mental health, Stevenson believes reaching out is the first step to healing.

“You have to be 100% comfortable with being vulnerable,” Stevenson said. “Being able to say you’re struggling, and it feels like there’s no way out — it’s okay to say that and embrace that.”

“I think one of the first things we do when we encounter these struggles is ask, ‘Why am I the weird one who has this problem? No one else is like me,’” Saia said. “I heard that a lot in therapy — a lot of criticism and self-loathing. You are not alone.”

Along with education, Saia believes an improved vocabulary will enhance discussions surrounding mental health after a crisis.

“I especially notice when I say things like, ‘Oh my god, this is so awful I want to kill myself,’” Saia said. “Things like that, I need to have a respect that [suicide] is a really real, serious thing.”

While she thinks mental health is not entirely destigmatized, Lester believes that society is on the path toward positive change.

“Mental health has always been a part of my life,” Kidder said. “I spent some time looking for something in KC I could be a part of, and there was nothing that I really wanted so I thought this was the best way to do it.”

According to Kidder, his organization not only helps others but himself in confronting his mental health struggles.

“I thought that there wasn’t enough communication between people that were struggling,” Kidder said. “I found that helping people have an open dialogue, sort of spreading the awareness, is therapeutic in itself.”

“We work to make it as easy as possible for youth to have the conversation,” Kidder said. “No matter with peers, parents or doctors.”

Kidder also believes mental health should be an every day topic of discussion.

“In an ideal world, speaking about mental health should be the same as speaking about any physical illness,” Kidder said. “I think it’s harder since you can’t see it.”

According to the National Alliance on Mental Illness, only “50.6% of U.S. youth aged 6-17 with a mental health disorder received treatment in 2016.” Since 7.7 million youth are categorized as experiencing mental illness in a singular year, this percentage leaves roughly 3.8 million people without treatment. Kidder believes organizations such as his own can combat this number.

“I think that if you are going to teach kids that coming forward — not even in a big way, just to their family or doctor — can make such a positive impact on their life,” Kidder said. “Mental health doesn’t have to be what defines them.”

Taylor emphasized this principle at All Hands In KC, hoping that through his event, those struggling recognized they are not alone in their journeys to mental well-being.

“We need to know that it’s okay to let go and be emotional every once in a while, and know that everybody goes through hard times in their lives — you have to accept that, recognize it and look forward to it,” Taylor said.

While mental disorder is not a voluntary battle, Stevenson agrees teenagers and adults alike must anticipate struggle by directly confronting negative feelings with reflection of their impacts on the self.

“There are choices, you can be happy, sad, in the middle — you have to create it for yourself,” Stevenson said.

Taylor believes that high schoolers’ agency to create community-wide change surrounding mental health extends beyond promoting individual growth, which is something he saw through All Hands In KC.

“I absolutely believe there’s a stigma, but I think us teens can change that,” Taylor said. “We just have to take the first step.”