ABC Cafe is not where the typical Kansas Citian goes for Sunday brunch, but it is a valuable cultural experience for Chinese and non-Chinese people alike. 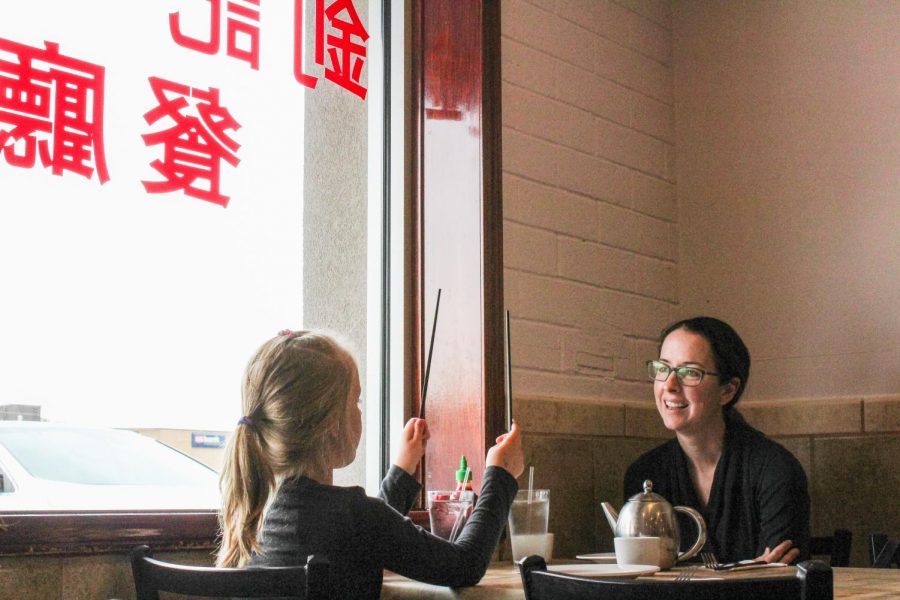 A young girl plays with chopsticks to entertain her mother as they wait for their order.

Having an ABC Cafe waiter put five steaming dim sum plates on the lazy Susan in front of me is equivalent to the feeling of being brought the first present on Christmas morning. I have to think hard to not wiggle in my seat, adrenaline rushing through me as the server seems to draw their hand away from the tin baskets in slow motion. I am ready to absolutely destroy this food. My food.

Dim sum is the Cantonese-Chinese serving of small, bite-sized “snacks” such as shrimp shumai dumplings, soft and fluffy bao, sticky vegetable wontons and sweet egg custard pastries. In Kansas City, dim sum is known as a Bo Lings specialty where servers push around carts of stacked food and customers ask for what they want off the top. Less commonly known is ABC Cafe, a fittingly tiny restaurant at 10001 W 87th St in Overland Park, KS. Here, there is no room for push carts, so waiters take your order on paper and bring it to the table individually. They come around every so often to ask if you’d like to anything else, and I find humor in the inevitable “yes” before I confidently order the next round of plates.

Getting this comfortable with other Chinese people was difficult before my family found ABC. I was adopted at nine months old from Guangxi, a region in Southeast China. Since then, my parents have tried to expose me to as much of my native culture as one can in the midwest; I took Chinese dance lessons as a toddler, went to annual “Moon Festivals” to watch lion dances and tried almost every Chinese restaurant in town. However, these were not fully submersive experiences as half of the people running these things were still white. I was simply seeing Asian aspects in a Caucasian culture. ABC Cafe is the authentic outlier.

The entire staff is of Asian background and you can tell by the concentration on their faces that they have traditional, hard-working attitudes. Dishes from each part of their menu have an inexplicable sweet-ricey-lotusey flavor that I don’t get at other Chinese restaurants. ABC knows how to properly cook rice so it’s not too wet but not too crumbly. It is in these details that I find myself comfortable in a truly Chinese environment.

Biting into ABC Cafe food is like biting into my own history that I don’t even remember, but somehow feel so familiar with. Letting a fresh sesame ball melt in my mouth cures a sense of homesickness I didn’t know I had before walking into the restaurant. When I say this is my food, I don’t just mean that I find it delicious and therefore am possessive of it (though I am). I mean that I have ethnic ties to this food and get teary-eyed every time my nose catches a subtle whiff of pepper squid or red bean paste.

This is not to say that ABC Cafe is exclusively for Chinese folk, though. Quite the opposite. When I was there just last Sunday—the day I took these photos—I saw Indian families, white families, black families, families of mixed races, the list goes on. Good people like good food: no discrimination between the two.

If you are not Chinese, do not be discouraged by the fact that this restaurant is not Americanized. Tasting the new and unusual flavors is as close to being in China you can get. If you are not an adventurous eater and feel safer with Panda Express, don’t worry. ABC has a solid chicken fried rice. I encourage you to get off the beaten path and “absolutely destroy” some of this food for yourself. Who knows, maybe you’ll feel just as at home as I do, too.