Tyler the Creator: Mosh or Be Moshed

An event that began at 12:15 p.m., Tyler the Creator delivered a performance on Oct. 5 that was completely worth a 6 hour wait. The crowd itself was filled with a rowdy energy I had never seen before, which had positives and negatives. 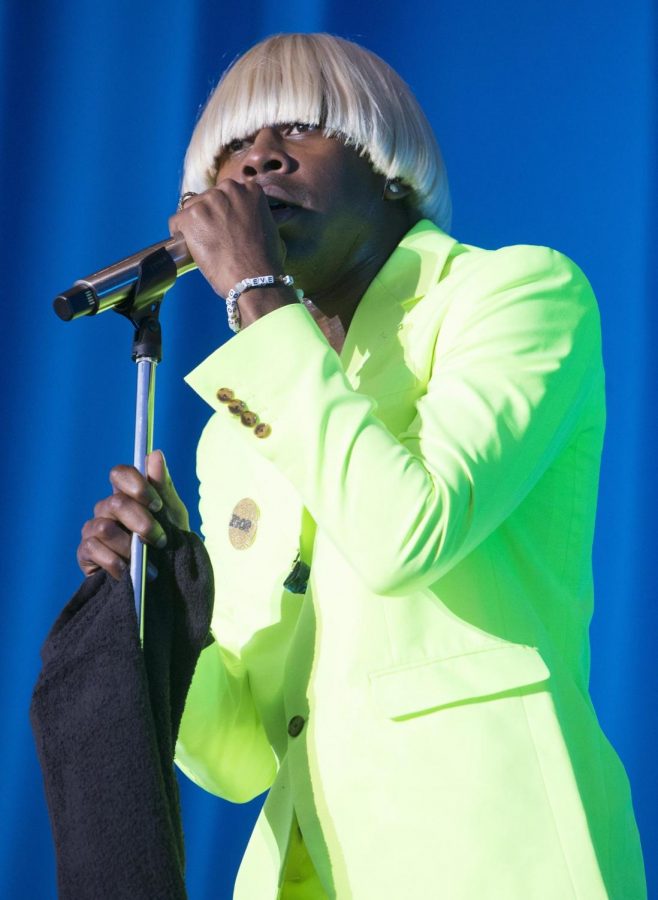 At 12:15 pm on Saturday. Oct. 5, I was huddled under two umbrellas with three chairs, clutching a bag of snacks in my lap as a cascade of rain poured over Silverstein Eye Arena. Tyler the Creator would not be performing for another 5 hours, but my eagerness never wavered as those hours crawled by. Each hour that passed was another milestone reached that brought me even closer to seeing an artist that I have been enamored with for the past three years.

Junior Ellie Hatley and I were intent on being as close to the stage as possible once the concert began, which is what prompted us to arrive as early as we did. To say we had high expectations was an understatement. The entirety of the car ride to the arena was spent eagerly discussing and imagining how each song on the setlist was going be a once in a lifetime experience.

By 3:00, the intermittent rain had stopped and we had reached the halfway point. A solid line had accumulated behind our group, which had now expanded to about six people. Luckily we had come prepared with food, but most of it had been consumed at this point. We each took turns turns napping to preserve energy. Despite the boredom of the tailgate, the anticipation for Tyler fueled our spirits through the last leg of the 6-hour wait.

The line began to move closer to the doors as 6:00 grew increasingly closer. A woman in line shouted “if you’re ready for Tyler say yeah!” which received a rowdy “yeah!” from everyone. As if on cue, the doors opened, which was met with cheering and excited chitter-chatter about whether acquiring concert merch or getting a spot in the pit was top priority. My group chose the pit, essentially sprinting to general admission to be as close to the stage as possible. Any exhaustion we had felt during the tailgate had been replaced by pure adrenaline.

The show opened with a performance from American rapper Goldlink. I quickly learned two things as soon as the show began: I am a small person compared to the overall demographic of the pit, and I was going to mosh by choice or by force. Mosh or be moshed some would say. In all of my concert experiences, I had never experienced a mosh pit that quickly turned terrifying as it did during Goldlink. If you were not jumping, you were forcefully lifted by those around you. The fear of being trampled was very real. My group was quickly separated as the violent moshing continued song after song. I thought to myself that if this was going to be how the crowd was for the whole night, I would need to leave the pit simply for my own safety.

By the second opener, half of my group had moved from the right to the left side of the pit due to moshing. Thankfully, Blood Orange is an indie R&B vibe that invoked only mere swaying from the pit. My focus during this was trying not to pass out from the overwhelming fumes and body heat packed around me. Many health-risks occurred in the pit including people passing out and one girl in the front had a seizure. Despite the cool visuals that Blood Orange provided in the background to match their groovy sound, it was difficult to enjoy in a pit jammed like a pack of sardines.

Everything that had happened was completely worth it when that first vibration rang out from the speakers, indicating the beginning of “IGOR’S THEME”. The silver curtains parted, revealing Tyler dressed in a yellow suit and bobbed blonde wig. One man on the stage captured the attention of Silverstein and would maintain it for a dynamic, awe-striking hour and a half set.

Tyler introduced his most well-known song off of IGOR,  “EARFQUAKE”, with an elegant piano piece. As Tyler tickled the keys of the white piano, the crowd joined in as the chorus hit. As the piano began to crescendo, he stopped and transitioned to perform the song vocally. I thought that including the piano piece gave the audience an opportunity to connect to the song on the different level. The song itself is seen as one of the more mainstream pieces off of IGOR, and the piano introduction allowed me to view the song with an ornate tone.

In contrast to Goldlink’s mosh-fest, Tyler’s set held two prominent mosh moments; one being several smaller moshes to the song “Who Dat Boy.” In the pit that formed closest to me, right as the bass dropped someone did a full flip, which I was ecstatic to have caught on video. This was one of the only instances where Tyler used pyrotechnics to hype the audience, rather than simple projections on his backdrop. The sound of the flames made resembled a gun-shot, which sent a shock of fear and adrenaline through me for a brief moment. But I felt that the flames emphasized the energy and extreme rowdiness captured in the pit.

Most of Tyler’s visuals revolved around projections that blew him up to a larger scale. They all had a holographic, dazzling look to them but the projections during the song “See You Again” encaptured me the most. It was a series of cloned Tylers marching like troops, with the occasional salute, on a loop. They seemed to encircle the real Tyler, who was saluting and marching in tune. The song is another one of Tyler’s more popular pieces, so the visuals really helped punctuate it.

He closed the concert with his final song on the album IGOR, “ARE WE STILL FRIENDS?”. It was an extremely fitting song to close with, invoking emotional, broken singing from in the pit. During the instrumental piece, Tyler was lifted above the stage, simply dancing to the music. Everyone in the arena was silently watching him dance, with seeming speechlessness. The spell was broken once the instrumentals were over and the crowd arose in finishing the song. In this moment, I was awestruck by how he enamored everyone in the crowd; allowing me to see him in an almost god-like form.

Tyler left the stage and the lights came up, revealing a sea of sweat-drenched individuals still comprehending what they had experienced. Words tumbled out of my mouth as I began to recount my view from my place in the pit and all the events I had experienced. I truly cannot put into words what it was like to see someone I had admired through a screen for so long just feet in front of me. I left the concert wondering how I could ever attend another show after that one. What was left after this incredible performance?

Tyler commanded the arena with only his style, his dance moves, and his music. No matter how long you have been a fan since 2009 or 2019, anyone could dance and mosh to every song in his set. The energy and individuality that Tyler holds in his music were projected into the audience that night. Seeing someone I admire so much as a human being in person was life changing. The next day I truly felt some “post-concert depression.” Waiting 6 hours in line for a crazy-sweaty mosh pit? Completely, utterly worth it.