Affinity groups on campus aim to create a shared space for minority students to build community and provide the student body with a greater understanding of their respective cultures. 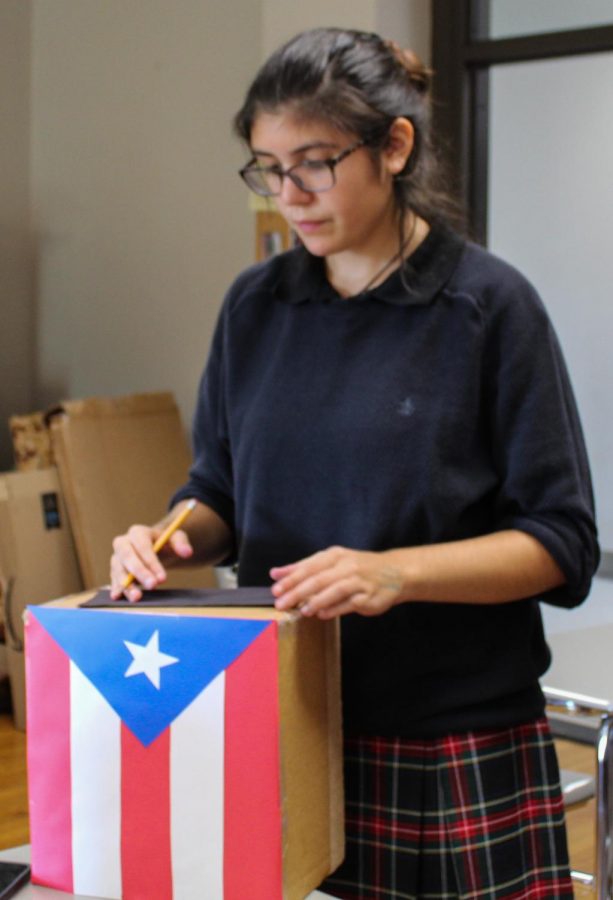 Freshman Isabel Reyes creates a paper window for a Puerto-Rican flag display in the Hispanic Affinity group Sept. 25. Students create a display for Día de los Muertos, Day of the Dead, to be displayed at the Nelson-Atkins Museum of Art. photo by Olivia Powell

Sophomore Keyla Ramos is one of about 15 students who gather in room M205 during a monthly activity. Ramos, the daughter of Mexican immigrants, turns her attention to the front screen as she watches a video of Hispanic and Latinx students from around the world grappling with the stereotypes they face in the United States because of their heritage: they must be from Mexico if they speak Spanish, they can’t be of Cuban or Puerto Rican descent if they appear white.

The students in the video express frustration with these stigmas, a feeling Ramos and the other Hispanic Affinity Group students in Spanish teacher Maria Lopez Gonzales’s room are familiar with when it comes to embracing their Hispanic heritage in a predominantly white environment. As the video concludes, the students arrange their desks to hold a what Lopez Gonzales calls a “circle talk,” which is an opportunity for the students to voice their thoughts.

“Some students share with the group that due to misconceptions or lack of information, peers inadvertently confuse or make mistakes regarding their heritage,” Lopez Gonzales said. “Educating people will avoid this type of issue.”

The Hispanic Affinity Group is one of three affinity groups at STA, along with the Black Student Coalition and the Asian Affinity Group. Each consist of students of a common heritage and purpose.

“I’m really proud to be Peruvian and American and whenever there’s an opportunity for me to share my culture and my heritage, I’m there,” Lopez Gonzales said. “I think in my college years, I would have loved to have a group like this.”

When Ramos graduated from an eighth grade class of 18 people in a diverse public school, she was nervous about the change STA would bring. Finding other students with a shared Hispanic background meant that she didn’t feel as different in her new school.

“Hispanic Affinity Group is not really formal, it’s more about finding friends that also come from a Hispanic background that can say you’re not alone,” Ramos said.

“I think the goal of Black Student Coalition is to inform others that racial issues are real,” Landrum said. “This isn’t just like something off the TV.”

Landrum hears the concerns other students have about code switching, tokenism and cultural appropriation. She wants all students in the affinity group to feel comfortable sharing their opinions with each other but also taking stands outside the affinity group.

“I just want people in the group to know that you have a voice, even though it might seem intimidating,” Landrum said. “We have a purpose on this campus, so let it be known.”

The Black Student Coalition is moderated by director of diversity and inclusion and admissions assistant Brianna Walker, who Landrum says “understands like an older sister.”

Walker found the experience of stepping into her first lecture hall at Mizzou, a predominantly white institution, daunting. She cites diversity student groups and resources on campus as some of the most important experiences she had while in college.

“There were people that looked like me, I could put my bags down and I didn’t have to worry about hiding what I’m saying or anything like that,” Walker said. “That was refreshing for me on that campus.”

The goal of affinity groups goes beyond creating a safe space for minority students to meet. The Hispanic Affinity Group makes is currently collaborating with the Nelson-Atkins by building a Day of the Dead altar to display at the celebration Nov. 3, which features colorful buildings and countries in a big city display.

“The activities in the school are important, but also helping the community, I think it’s so important,” Lopez Gonzales said. “I would like them to make connections with community leaders and organizations from Kansas City. Another thing I want the girls to participate in would be a fundraiser, for example, for Christmas, help a family or Latino family in need.”

To Ramos, her Hispanic heritage reminds her of family. She learned, by watching her brother graduate from Rockhurst High School, that she can feel empowered by heritage when she stands out. The ability to find time and space to connect with girls who look like her and can relate to her background not only eased her transition to STA, but serves as a reminder of why Hispanic heritage is special.

“My brother said, ‘Don’t be embarrassed or shy of where you come from’ because that’s how he felt when he first moved to Rockhurst,” Ramos said. “As he started growing up, he said, ‘where I come from, it’s good, I shouldn’t be embarrassed by it.’ Yes, it’s different, but that’s also what makes me different, unique.”