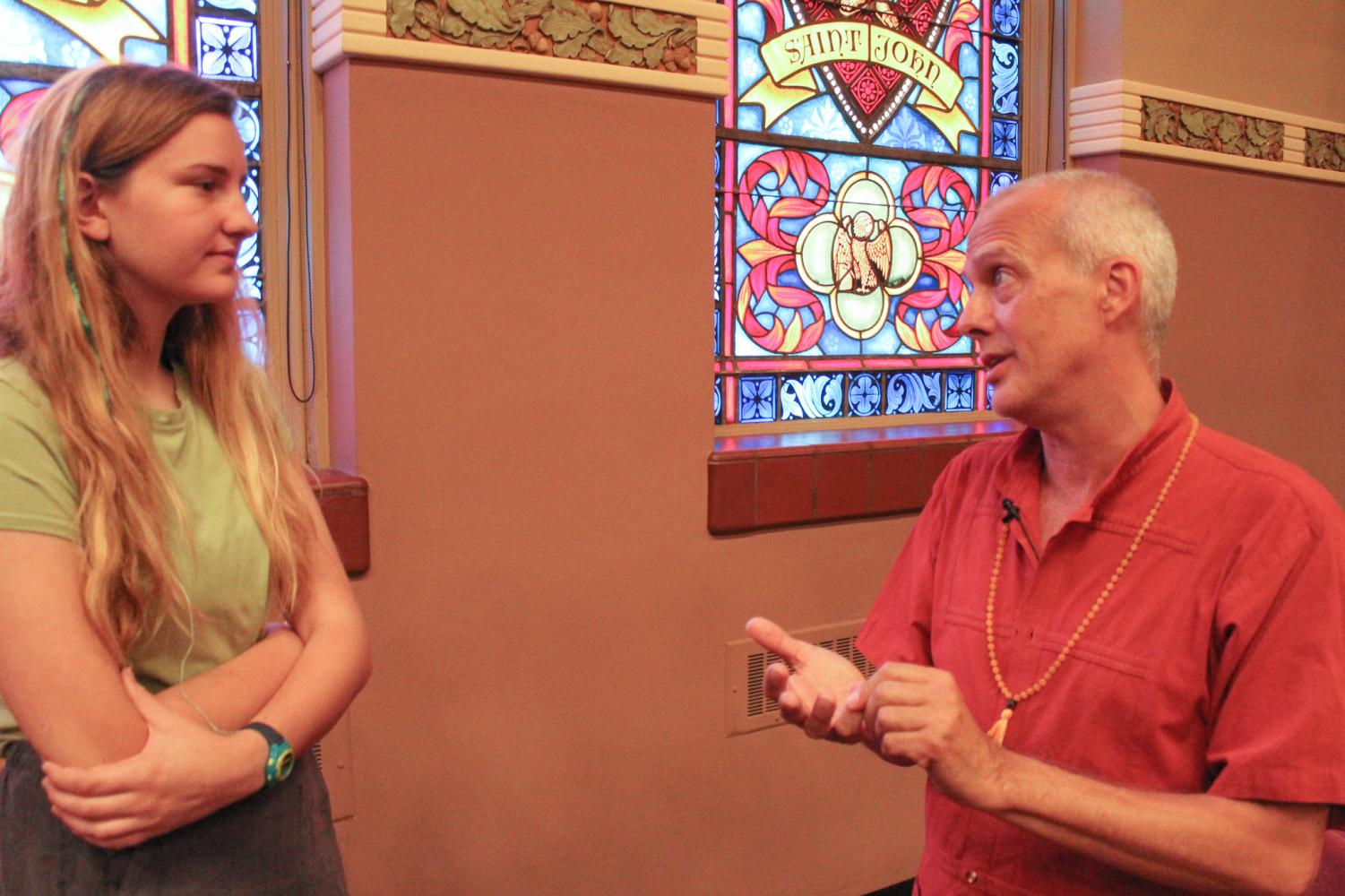 Having faith-based conversations and learning about different religions can help one develop their own personal beliefs.

Every Sunday morning, junior Kelly Ann Greene wakes up at 6:30 a.m. to join her family for Mass. After mass is over, she leaves her family and heads to the 9:00 a.m. meditation service on the plaza.

“I’m a Catholic who practices Buddhism as well,” Greene said.

Since Catholic mass and school ensured religion was a part of her daily life, Greene grew up surrounded by faith.

“It was very drilled into my head that this was the truth, and this was the only way,” Greene said. “The only way was Jesus and Catholicism and the teachings of the Bible.”

According to Greene, Buddhists and Catholics have similar key beliefs, which helped her incorporate the two religions into her daily life.

“When you boil it down and look at the actual goals of both of them, they’re very similar,” Greene said. “I think everyone wants everyone else to be happy and loved. I think that’s the most important thing.”

Bob Hansen, currently an interim pastor, has been serving his community for over 50 years as a Lutheran pastor. Hansen believes all religions seek to answer what life is all about.

“I think all religious faiths try to draw one into an understanding, a relationship with a divine being, whatever shape or form that takes,” Hansen said. “Faith is really searching for an ultimate reality.”

“Most of the persons that are drawn to a new start at a new ministry have not had that experience of being a part of a community of faith before,” Hansen said. “That was always kind of exciting, to see that develop.”

Hansen also saw a lot of people grow and change their faith while serving for six years as a pastor within the prison system. During that period, Hansen taught Bible classes and helped counsel incarcerated men and women.

“Everybody you’re dealing with there is struggling and searching, and sometimes there are different faith perspectives that are appealing to them,” Hansen said.

Greene had a similar experience her freshman year when she started learning about Buddhism in her theology classes.

“I thought it was very progressive,” Greene said. “I started reading books about it and just learning a lot about the topic and also going to meditation services down at the plaza.”

Greene said she was fascinated by how Buddhists were so independently working, meaning the individual is responsible for their actions.

“You get what you put in and you have to be the one who does the meditations, does the work, in order to get anything out of it,” Greene said.

Hansen also believes it is important to work towards a better understanding of one’s faith. One way to do that is to talk about individual experiences with faith.

“The main thing is, you don’t have to go on the journey [of faith] alone,” Hansen said. “In other words, there is always a comfort in carrying out conversation with other people.”

Jon Willis, founder and chair of the Kansas City Interfaith Youth Alliance (KCIYA) board, also believes conversations can help solidify someone’s own faith. KCIYA was founded in 2009 with the goal to start interfaith conversations among youth by doing service projects.

“Once youth form a space and start asking questions, it creates a level of comfort,” Willis said. “The part I’ve seen time and time again is the youth wanting to share their [faith’s traditions], so they go back and ask their church group. They think more deeply about the why of certain traditions.”

Willis believes taking the time to think about and value your traditions in faith can lead to a greater understanding of your religion.

“At the end, when people go away from KCIYA, I always ask them what they got out of this,” Willis said. “Almost all of them said they were further along in their own faith journey, or they better understand their faith. That’s been one of our biggest successes.”

Greater religious understanding can lead to a change in faith. Greene said the most difficult part about her transition into being Catholic and Buddhist was not wanting to leave Catholicism behind.

“My family is very Catholic, so it was very confusing for me when I was thinking about switching religions,” Greene said. “I don’t want to switch religions. I was raised Catholic, and I think Catholicism will always be a part of me.”

Meditation services helped Greene with her Catholic beliefs by giving her time to reflect on what she values in her life.

“Meditation allows me to pick what I think is true and how I want to live my life,” said Greene. “I like to follow the teachings of Jesus by leading with love and loving your neighbor.”

KCIYA is centered around the shared value of serving others. Service projects bring youth with different religious faiths together and allow them to start having conversations.

“Having that bond of service really makes you open up and realize we have different faiths and worldviews about certain things but we can respect each other,” Willis said. “We focus on building a respect for an identity.”