Gun violence is becoming more common in the Kansas City area. Recent shootings have occured in places like the Plaza and the Central Academy of Excellence. 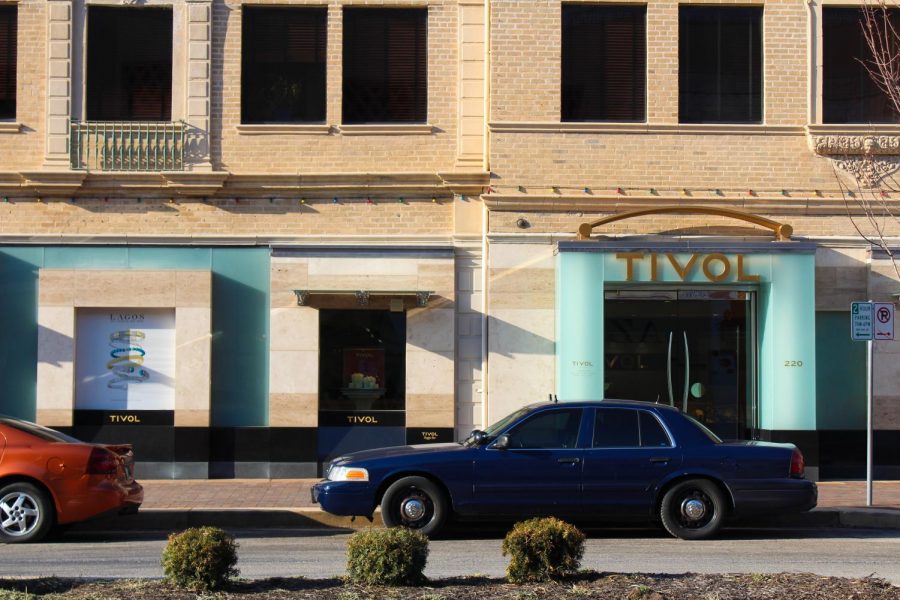 A police car sits outside the Plaza Tivol store as part of the area’s security system March 2. During the Oct. 17 Plaza shooting, security captured the gunmen quickly since multiple policemen were surveying the area at the time. photo by Amy Schaffer

It was 8:15 p.m. Tuesday, Feb. 12, and Anjanique Wright was leaving a basketball game at the Central Academy of Excellence in Kansas City. Suddenly, shots rang out, and Wright was hit with a bullet. She was transported to a local hospital, where she later died.

Recently, Wright is not the only one in Kansas City who has died because of gun violence. According to the Kansas City Police Department, in 2018, there were 135 homicides in Kansas City. Out of these homicides, 129 were committed by guns.

Shootings are becoming more common in the Kansas City area, as are gun-related deaths. In 2015, there were 109 homicides, 91 of which were committed using guns. In 2014, 76 homicides occured in Kansas City — 62 of which were gun-related. Avila University junior Hanna Ly was in class when her friends texted her about a shooting on the Plaza Oct. 17.

“I was in disbelief because it was at a place that was very close to us,” Ly said. “The Plaza is a pretty well-kept area. It’s very nice, it’s very modern. A bunch of people from different backgrounds, from all over Kansas City, come to hang out there. So the fact that there was a shooting there was just very surprising. It’s part of my city, so I didn’t expect for open gunfire to be there.”

After class, Ly traveled to the Plaza to meet up with her friends. Upon arrival, she found that there were police cars blocking roads and that most of the shops had closed for the day.

“The Plaza did take measures in shutting down their stores, which I thought was very awesome that they prioritized their employees,” Ly said. “A lot of shops there were on lockdown or they were just closed.”

Since the shooting, Ly has not been hesitant to return to the Plaza. She still feels safe there because of how the Plaza security and police handled the violence that occurred.

“I didn’t really think about it as much after it happened because they had caught the guy that opened fire,” Ly said. “That actually made me feel relieved because they caught him so fast. That really helped me. It’s the fact that knowing that the Plaza security is better than I thought.”

Shootings are now becoming part of everyday life for some people, such as the University of Missouri, Kansas City junior Bailey Nguyen. Nguyen was at work at a pharmacy in Northeast Kansas City last year when there was a drive-by shooting.

“Less than a block down, there was a drive-by shooting, and a guy got killed, and he was just in the middle of the road with caution tape around him,” Nguyen said. “My friend took the trash out at the end of the day and saw it.”

“It was scary because it’s the closest shooting that happened in proximity around the Kansas City area,” Nguyen said. “Being on the Plaza after, it was scary walking around because you don’t know if [the shooter’s] around the corner.”

Since the shooting, Nguyen has felt more unsafe on the Plaza.

“If something already happened there, you’re going to think that there’s reason for it to happen again,” Nguyen said.

“Yeah, [I feel safe], especially since my parents’ guns aren’t just in a cabinet somewhere,” Foster said. “My mom has a fingerprint safe, so it has to be her to open the safe.”

However, Foster agrees that the amount of gun violence in Kansas City is affected by how many people own guns. According to CBS News, 27.1 percent of people who live in Missouri own guns, and 32.2 percent of Kansas citizens own guns.

“The more people who have guns, the more chance there is that those people aren’t responsible with them,” Foster said.

Along with the shooting on the Plaza, there was also a shooting at the Oak Park Mall Dec. 26. However, Foster says she still feels comfortable going to places where there have been recent shootings.

“Anywhere you go, there is always a chance that something is going to happen,” Foster said. “If it happens really frequently, then I would feel really uncomfortable and not want to go there, but if it’s not a very frequent thing, you just have to take your chances anywhere you go. Anything that’s public — there’s a chance that something bad happens.”

Among this time of increased violence in Kansas City, Foster thinks that it is more important to focus on what is causing the violence rather than gun control itself.

According to Ly, despite the fact that gun violence is terrible, she hopes that it can help bring the community together and figure out how to solve the debate on gun usage.

“The Plaza is a notorious place for people to go and protest,” Ly said. “Whenever people do hold protests, whatever side of the spectrum you are on, it is solely because they want the betterment of humankind, whatever their opinion may be. Whenever something tragic happens, something greater does benefit from it in a sense. I’m not saying that bad things should happen. I’m just saying that, at the end, good will always prevail.”