The Nelson-Atkins features artworks confiscated by Hitler’s forces during and prior to World War II intended to either be destroyed or featured in the Führermuseum to glorify Nazi ideology. 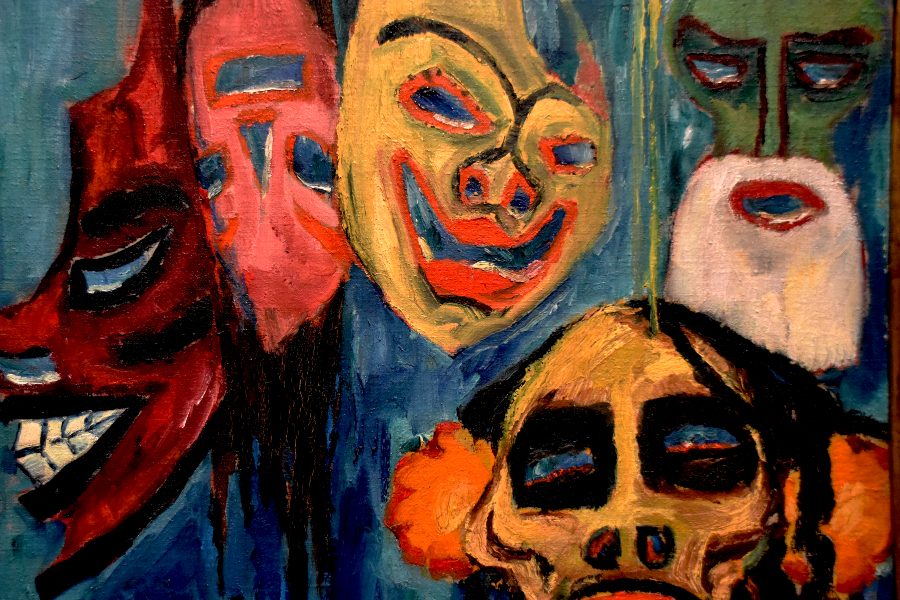 Mackenzie Mallon is speaking at the Nelson Atkins Museum regarding the “Discriminating Thieves” art exhibition on Jan. 29. photo by Claire Smith

Open until Jan. 26, 2020 at the Nelson-Atkins, the Discriminating Thieves: Nazi-Looted Art and Restitution exhibition features four artworks that were displaced during the Nazi art looting during and prior to World War II. MacKenzie Mallon, the Nelson-Atkins Museum of Art provenance specialist, detailed each work’s path across the world and purpose of its confiscation by Hitler’s forces in her talk, What Once was Lost: Nazi Art Looting and Allied Restitution.

“To Hitler, the Nazi art looting campaign was personal and exacting,” Mallon said. “He had a specific agenda for what to steal and how to use it to achieve Nazi objectives. By targeting Jewish art collectors, he worked toward the complete annihilation of his enemies, both physically and by destroying their artistic heritage, depriving them of what he most coveted.”

Along with hundreds of thousands of other artworks, the paintings’ journeys began when Adolf Hitler first used art as a political tool, conveying Nazi principles through the works he glorified.

“Hitler used art as a means to disseminate his agenda and to describe the superiority of the Aryan race, the power and strength of Nazi Germany and the authority of himself and his Nazi leaders,” Mallon said.

He favored works that celebrated the German people and followed a Naturalistic style, depicting landscapes and human activity as accurately as possible. However, he was not satisfied with simply supporting German art.

“He was equally resolute in his determination to suppress art of which he did not approve — namely art that might undermine Nazi ideology and damage the vision of Aryan supremacy that the Nazis were promoting,” Mallon said.

Hitler labeled these pieces “degenerate” and desired to purge his land of everything he believed supported his adversaries. This prompted the Nazi art looting campaign.

“In 1937, a Nazi committee led by painter Adolf Ziegler began removing these degenerate artworks from Germany’s own national museums,” Mallon said. “The confiscated art was either destroyed or sold in order to raise funds for the Reich. This especially included works in the Abstract, Cubist and Expressionist styles that were favored by Contemporary artists.”

It is estimated that one third of the art deemed degenerate was burned during the looting before it could be disseminated across Europe. The Nazis also looted artworks not for the purpose of destruction, but to feature in Hitler’s new museum intended to enhance German glory.

“The Führermuseum would include paintings, sculptures, drawings, prints and objects of decorative art, stolen from collections throughout Europe — many of which were owned by Jews,” Mallon said.

To avoid advancing Allied forces, the artworks destined for the Führermuseum were frequently shuffled between castles, churches, mines and private homes throughout Germany and Austria. This process was later threatened upon the Allies’ recognition of the immense cultural destruction of the war and creation of the Monuments, Fine Arts, and Archives program, the MFAA, in 1943.

“The 350 men and women of the MFAA were charged with preserving cultural heritage, historic buildings and works of art in the war areas,” Mallon said. “Today, we refer to them as the Monuments Men. They included art museum directors, conservators, historians, dancers, poets, many were draftees that had been moved to the MFAA from other sections of the service and many of them were volunteers.”

When the Allies entered Hitler’s territory near the end of the war, they found the large stashes of artworks looted by the Nazis. The Monuments Men set up collection points to identify artworks using Nazi records and worked years beyond the end of the war to return the pieces to their rightful owners. However, not everything stolen by the Nazis could have restitution.

“Many recovered objects could not be returned to their pre-war owners because there was no one left for them to be returned to,” Mallon said. “Entire Jewish families had been wiped out during the Holocaust and no heirs were left to claim their property. In these cases, artworks were returned to their countries of origin and it was left up to the governments as to what to do with them.”

More than 70 years after the end of the war, the restoration of both the artworks and culture the Nazi art looting campaign destroyed still continues. The Nelson-Atkins will host speaker Corine Wegener, director of the Smithsonian Cultural Rescue Initiative, on March 7 and later show three films to advance the conversation regarding the four previously looted works featured in their exhibition.

“By exploring this history and sharing our finds, we hope in some small way to contribute to the ultimate resolution of the Nazi art looting,” Mallon said.