This fall, STA welcomed Sergeants Mike Foster and Robert Wynne. They both spent 20 plus years in the Kansas City Police Department and bring a philosophy prevention, not just reaction to campus. 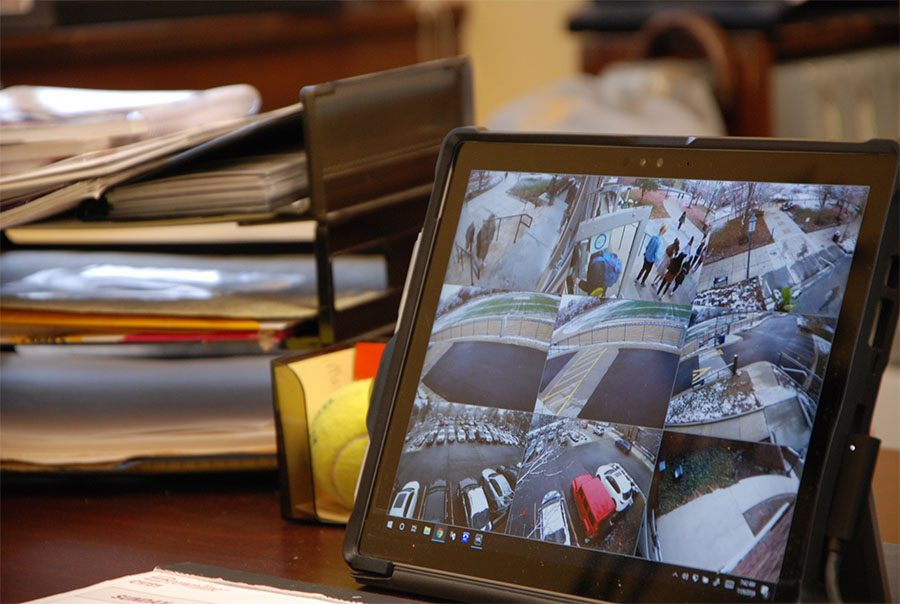 Live footage from the security cameras are visible on the surface pro in Administrative Assistant Kelly Drummond’s office Nov. 9. The cameras survey entrances points and the perimeter of campus. photo by Claudia Benge

It was a beautiful fall day at STA and some students gathered in the quad. They chatted aimlessly about tests and weekend plans, while eating their lunch. But without students knowing, Sergeant Robert Wynne was surveying the quad for potential security risks.

“We never want the students to wonder is their safety is at risk,” said principal of student affairs Liz Baker.

Baker and administration hired a security company and officially welcomed Sergeants Mike Foster and Wynne to campus for the start of fall semester. Coming with extensive experience, they both spent 20 plus years in the Kansas City Police Department.

“In looking at scheduling matters such as night time events, we decided that one person can’t be everywhere,” Baker said. “Two security advisor serve to cover drills and situational awareness as well as hands on things.”

The safety directors primarily focus on cybersecurity and situational awareness while zeroing in on the idea of prevention not reaction. This includes focusing on giving tips that girls can take off campus to improve personal security.

Baker admitted that as a principal, she has had extensive leadership and education classes but limited security classes. “[Wynne and Foster] are really helping STA’s academic community to have more awareness,” Baker said.

In previous years, STA conducted a combined practice drill for fires and tornados, which took place the first day of school. The school now partakes in monthly situational drills for intruders, storms and fires. Technology wise, electronic keypads and cameras are installed throughout campus and students and faculty are given designated codes for the opening of door.

“School shootings were definitely more prevalent in the school’s mind frame,” Baker said. “Going forward, administration decided that the school needs to conduct drills every month to ensure that students wouldn’t panic if a situation were to arise.”

Sergeant Wynne spent 27 years at KCPD. He worked closely with Homeland Security and found a passion for educational services after the Columbine shooting of 1999. He specializes in cybersecurity and looks comprehensively at protocol for emergencies.

“I got involved in something called critical infrastructure protection, which focuses on not only responding to emergencies but how to prevent them,” Wynne said.

Foster also brings about 20 years of investigative work to STA’s campus. Foster is a retired Kansas City Police Officer and specialized in property crimes, as well as street narcotics.

Putting aside emergency protocol plans, both sergeants can agree that personal security is one of the biggest concerns regarding STA students as individuals, especially when it comes to complacency.

If there isn’t an incident on campus and things are going smoothly, people aren’t aware of their surroundings like they should be,” Wynne said.

The sergeants have brought with them a campaign of awareness, promoting safety tips on topics regarding cyberbullying, driver safety and auto theft.

Many students at STA are new drivers and according to the Missouri Office of Traffic Safety, a 16-year-old is 20 times more likely to be killed in a crash than an adult. Out of those crashes, six out of ten teen accidents involve distractions including, cellphones, music and multiple passengers.  The sergeants have sent safety and security emails detailing tips on driver safety. These information resources aid students in developing personal security, while also contributing to the overall safety on campus.

“As always, you have to have a balance of prevention, response and recovery,” Wynne said.