The Hate U Give Depicts Real, Black Life

The Hate U Give is an accurate portrayal of what it is to be a black teen in America today. 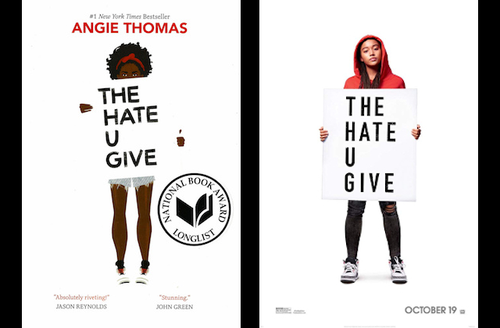 There are two versions of “the talk” for many black kids. There is one with the birds and the bees, the awkward pauses and avoidance of eye contact. This is the one most people received in the throes of adolescence.

The second talk is a little different. It’s deflated shoulders and teary eyes and indignation. It’s the talk that could ultimately save your life. It’s the talk that tells you what to do if the police pull you over: if you’re alone, you immediately call a loved one. You stay polite and cordial. You do what they tell you. No matter how humiliated and indignant you may feel, you keep a stiff upper lip and a polite smile on your face.

You give them no reason to kill you, because they’ll try and find one.

After Michael Brown, an unarmed black teen, was shot by a police officer in 2014,  my parent, like many around the country, made it a point to inform me that it isn’t every police officer, and that it isn’t our fault black bodies are seen as inherently dangerous. No, it isn’t fair that this is our reality. But it is, and that they want us to be prepared. They want us to be safe Above all, they want us to come home alive. This talk is what opened the film “The Hate U Give”,in which a young Starr Carter (Amandla Stenberg) and her brother Seven (Lamar Johnson) receive a talk from their father to make them of one of many stipulations given to you when you’re born black in America.

Reverend Traci Blackmon once said, “It is impossible to be unarmed when my blackness is the weapon you fear.” The death of Starr’s childhood friend Khalil at the hands of a white police officer exemplified that. As Khalil reached into his car to grab a hairbrush, the officer shot him where he stood. As he bled out on the street, that same officer held a gun to his dying body because the real weapon he feared was Khalil’s blackness. It didn’t matter that he saw Khalil was unarmed. He was still a black man in Garden Heights, an urban neighborhood, and both are viewed as inherently dangerous by a larger piece of the population.

The Carters, eager to distance their children from those stereotypes, send their children to a predominantly white private school in the suburbs, Williamson Prep. On the way out of Garden Heights, and into the Williamson area, the houses greatly resemble a drive through Brookside, and her fellow students remind me of my dearest friends from St. Paul’s Episcopal Day School and St. Teresa’s.

Starr describes two versions of herself. “Garden Heights Starr” uses slang and pops off at the mouth. “Williamson Starr” avoids confrontation, only uses correct grammar and never gives anyone the chance to assume she isn’t “one of the good ones”. This duality is called code-switching, and is something most black kids in a white environment are very familiar with. Our parents send us to better schools than they went to, to create a better life than they had.We repay them by being the best, more palatable version of ourselves we can be.

A prevalent aspect of this movie was Starr grappling with this duality, and the alarm this caused her peers when she slipped. The movie accurately depicted the confusion and frustration one feels when a friend cannot comprehend how their actions are viewed as racist, or expect an apology for even suggesting they are acting in such a manner. When the emotions from Khalil’s death mixed itself with that frustration, the result was a deviation from the typical subdued “Williamson Starr,” and her friends did little to support her in the wake of this deviation.

There are certain aspects of being black in America that are not easily articulated and can only ever be fully understood by living through it. Police brutality is one of them. Starr is so aware of this that she tries to conceal her connection to Khalil because she knows her friends, and boyfriend might pity her or attempt to comfort or empathize but never actually understand what it is to be seen as a threat because of the skin you’re born into. Her friend Hailey did neither.

Hailey was willing to skip school for a quasi-protest, in which the students of Williamson bumped Drake from their cars and laughed in the parking lot. but Ultimately, she was only concerned about the life and reputation of the officer. Hailey hid behind “their lives matter too,” refusing to acknowledge the erasure of a life lost.

She justified Khalil’s murder with mentions of drug-dealing, saying, “someone would have killed him anyway.” She unfollowed Starr’s Tumblr after seeing pictures of Emmet Till, a black boy brutally murdered in 1955 by two white men. Hailey was willing to distance herself to avoid feeling guilty or uncomfortable and justified it by dehumanizing Khalil. As Starr said, “racism is more than saying the n-word and spraying black people with fire hoses.”

Racism is a lack of regard for our lives and that can take many forms, one of which is holding killers to a higher regard than those they kill, solely because of their occupation. “”The Hate U Give”” does an excellent job of humanizing both the victim and the police. We see the good and bad of both the urban core, its people and the police force, both of which are stereotyped in negative ways by either side of this issue.

“The Hate U Give” aims to eliminate those stereotypes. Khalil was more than just a drug dealer from the hood. He was a grandson, a friend and a part of a community. The police officer was part of a body of people, many of whom are genuine and kind, like Starr’s Uncle Carlos. Even though Carlos is a black man, even he said if he saw Khalil reach in and grab a suspected weapon at night, he would shoot without hesitation.  He could not say the same for a white suspect in a suburban neighborhood. Amandla Stenberg did an excellent job of portraying the same confusion and shock that the audience had. However, this honesty and the bluntness of his statement put things into perspective. It is incredibly dangerous being a police officer, and when the horrid creation of fear and racial bias is externalized, it results in lives lost.

The title “The Hate U Give” comes from rapper Tupac Shakur’s interpretation of the term “Thug Life,” which he said stood for The Hate U Give Little Infants F***s Everybody. That hate could be interpreted as systemic oppression, which many young black children are inundated with by the public school system which is often underfunded in urban cores, a broken justice system or the constant violence exhibited all around us. That hate manifests itself into crime, and rage, and violence —  the cycle continues.

That hate can only be broken with love; this is reiterated over and over again. It is seen in the loving embrace of Starr’s parents. It is seen in the way Starr’s father holds her close as she grieves for her friend. It is seen as her boyfriend Chris tries his hardest to see Starr while acknowledging and loving her blackness as opposed to deeming it irrelevant. It is seen in the outcry for justice for Khalil, whose life was cut much too short. Love is the overarching theme of the entire movie, and it is what keeps Starr from falling apart as she mourns her friend.

While this movie is an excellent portrayal of the larger issue at hand, there are some smaller details that the novel exhibited better. There was an elimination of DeVante, a character who acts as an excellent foil to Starr and added some needed humor and joy during this dark time in her life. The movie also failed to delve deeply into the dynamics of the gang’s presence in Garden Heights and Khalil’s own life (as he was actively trying to disassociate with the King Lords until his death) which played a much larger role in the novel. There was also a lack of character development with Starr’s other friend Maya, who had a minor role in the movie but grew to be a support system for Starr. She had also experienced racist comments from Hailey as an Asian-American. These stories are important to the work as a whole, but as often seen with film adaptations of novels, were not all able to be present in the film.

“The Hate U Give”, as a film and book, is an incredibly important body of work. There are very few pieces of art and literature that so accurately portray what it means to be a black teen in America. It acts as a tool to humanize both sides of this complex issues. We must all work to substitute the hate we give with love and actively fight to ensure others do the same.