An electric scooter coming, named Bird, has been taking over the nation far and wide. With a low price range and easy drop off spots, it’s hard to miss the scooters. 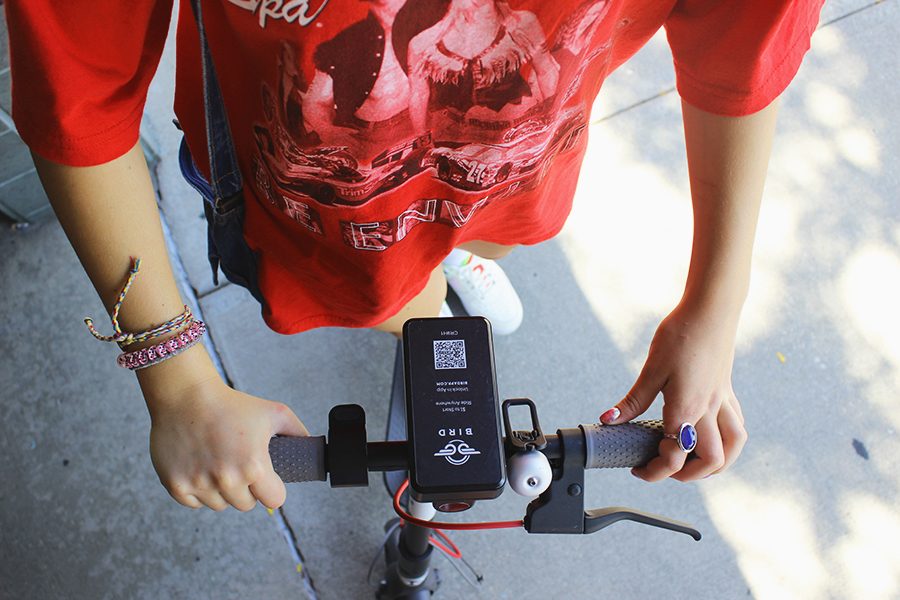 Sophomore Adie Zahner poses on a Bird Scooter in Westport Aug. 25. Zahner first found out about the Bird Scooters on a trip to Baltimore, Md. photo illustration by Aspen cherrito

Across the nation, Birds have been flocking to cities far and wide. Well, of course where they aren’t banned.

Bird, an electric scooter company, was founded in 2017 by Travis VanderZanden in Los Angeles, California. It has landed in over 30 cities nationwide, as well as in Paris, France.

Bird’s purpose is to bring low-cost, environmentally friendly transportation to communities across the world. VanderZanden began his fascination with transportation due to his single mother driving a public bus. He then became the forefront of innovative transportation solutions, ultimately leading to him creating ‘Birds.’

Various dropping spots are placed throughout the Metro, from Loose Park to 18th and Vine. On their app named ‘Bird’ a map with all of the scooters nearby is available and is also how riders can unlock and pay for their birds.

The cost to ride a Bird scooter starts at $1 to unlock it and then 15 cents for each minute you are riding. However, not everyone can ride them as the age to ride a scooter is above 18 with a valid driver’s license.

Although not old enough to ride them, sophomore Adie Zahner first had her encounter with Birds in Baltimore, Md.

“I think [the scooters] are great and really good way of transportation that are responsibly priced,” said Zahner. “When I found out they came to Kansas City I was really excited.”

Before riding, one must sign a consent safety agreement, watch an in-app tutorial on how to safely ride and the company has been offering free helmets to riders who request them.

Bird also has options to become a charger. If the rider is old enough, Bird will send you three chargers and have them acquire, or as Bird calls them capture, up three scooters around town. After, the rider will take them home, plug them in and then in the morning take them back to their station (which Bird refers to as their nest.) Chargers are paid anywhere from $5 a night to $30 depending on how many scooters they pick up.

Bird also offers discounts for riders who served in the U.S. military or are looking to provide employment opportunities in underserved communities. Under the name ‘One Bird’ the $1 base fee is eliminated, having the rider only pay the 15 cents per minute for anyone enrolled in federal assistance programs. The same goes for ‘Red, White and Bird,’ for veterans and U.S military servers.

Social studies teacher Andrew Meyer is one of the many members of STA faculty that has ridden the scooters.

“When I was younger, I always wanted an electric scooter,” Meyer said. “Once I saw they were available to everyone, I got super excited about it. You’re getting people outside and active, which is incredibly good for the city.”

A hashtag, #ScootersBehavingBadly, has city-goers sharing photos of Birds blocking traffic, being in the middle of the ride walk or on top of city benches. People have begun to try to destroy the Birds by setting them on fire.

However, according to their spokesperson, who preferred to remain anonymous,  “Bird looks to partner with cities that have our shared vision of communities with fewer cars on the roads, and less carbon emissions in the air. This dedication to cities is why we created the ‘Save Our Sidewalks’ Pledge and recently announced Bird’s GovTech Platform, which is a comprehensive set of technologies and products built in coordination with and for cities. The platform will help local governments incorporate and manage e-scooters as part of their transportation infrastructure.”

Bird job of realizing their mission of getting cars off the road to help improve the mobility and well-being of residents across cities has been noted nationwide. Since launching in September of 2017, Bird riders have logged more than a million rides, so next time you see one, hop on and scoot on.