There’s a new chief in town

Chief Smith was sworn in August 2017, and has put community relations at the forefront of the department. 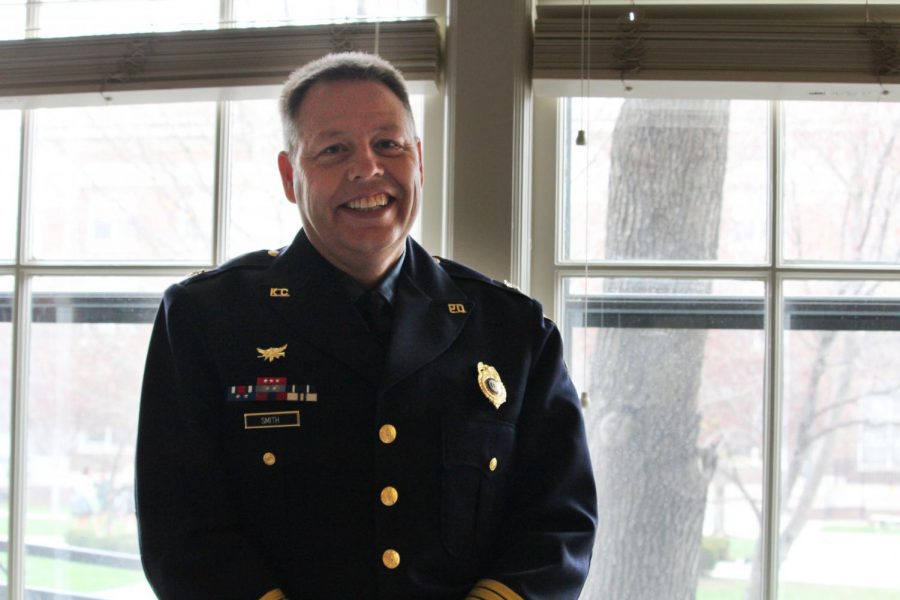 In the middle of Zahner Lounge, Police Chief Richard Smith looked slightly out of place. Amongst two St. Teresa’s students in their uniforms, and the creme palette of the meeting area, Chief Smith stood out in his navy police uniform, complete with various vibrant medals. Still, he greeted everyone with a firm handshake and a warm smile.

On August 15th, 2017, Smith was sworn in as the 45th Chief of Police of the Kansas City Missouri Police Department. His addition to the police department followed the surprise retirement of Darryl Forte, who announced his exit in May 2017. Thus began the process to find a new police chief.

“It was long, I’ll tell you that,” said Smith, recalling the selection process, which ran from May to August.

It began with resume submissions, then entailed a phone interview, two in-person interviews, a public forum with the remaining candidates and yet another interview. Finally, it came down to Major Richard Smith and Norman, Oklahoma Police Chief Keith Humphrey. It was Smith’s experience in the Kansas City Police Department that gave him the final edge.

“I think it prepared me very well,” Smith said. “I feel comfortable in my spot. I feel like I’m making good decisions. I don’t think I would feel that way if I didn’t have those experiences in that background to apply to where I am now.”

His background includes an education at the FBI National Academy, a master’s degree in criminal justice and a seat on the advisory board of Sheffield Place, whose mission is “to empower homeless mothers and their children to heal from their trauma and help them become self-sufficient,” according to their website.

“One of the things I like to say is that as a chief, all day long all I do is make decisions,” Smith said. “All those experiences I’ve had in volunteer work, graduate level experience, in the police department, that all helps me to make good decisions.”

It is this experience that has given him an appreciation for the camaraderie prevalent in Kansas City.

There are many options to reinforce this contact, from joining neighborhood groups to attending forums in which the department interacts with the civilian public. Chief Smith believes that intra-community interaction will increase the already strong relationship between the police and the Kansas City population.

“We have a lot of really good people in all parts of our city, and lots of people who like to be helpful and philanthropic and do things to make their neighborhoods and communities a better place,” Tomasic said.

Officer Tomasic has known Chief Smith for years, since her time in the Special Weapons and Tactics (or SWAT) team, and saw firsthand his leadership abilities before he came into his role as police chief.

“I was new in the squad, the only girl in my SWAT team and he was tenured in my squad,” Tomasic said. “He was such a peer leader even back then; hardworking, dedicated completely and always trying to do the right thing”

She has seen first hand the shift in authority from former Chief Forte to Chief Smith and his ability to build on the platforms Forte left in his retirement.

“A lot of people like to come in and fix things that aren’t broken,” Tomasic said. “That’s not {Chief Smith} at all. He’s seeing what he thinks is working, and if he sees something that isn’t working, I’m certain he’ll change it.”

One of the major focuses of Forte’s time as Chief of Police was community outreach, a theme Tomasic says has been a pillar of the department since Chief Jim Corwin, the predecessor to Forte.

“{Smith} is really picking up that same ball and running with it,” Tomasic said. “He seems to really understand the importance of partnerships with the community. Fixing our crime problem is going to take a team of the community and police together, and he knows that same thing.”

The crime problem to which Tomasic is referring is a prevalent one. According to the Kansas City Star, the homicide rate in 30 of the country’s largest cities dropped over five percent in 2017. Kansas City’s increased almost 20.

Chief Smith is working to combat violent crimes in a variety of ways.

“There’s a forensic gun program that we’re working on, we’ve upped the tip amount for homicide and we might up it again,” Smith said. “I don’t think there’s a single approach that’s going to change homicides because if anyone had, they’d be at Harvard making a million dollars.”

Smith emphasized the importance of community and communication in combating these crimes as well.

“We’ve doubled the number of community interaction officers, which is our officers assigned to the station whose job is to communicate with businesses, neighborhoods, community groups,” Smith said. “We’ve doubled up on that effort, but it will take some time.”

In tumultuous times such as these, with the Black Lives Matter movement in full swing, tensions are high at times between people living in urban cores and the police. Smith believes that finding commonalities between the two groups is key to keeping the peace.

“We’re way behind compared to the general population. Since becoming chief I’ve sent our commanders out to all their old colleges or anywhere they have a relationship with; whether they went to school there, or just attended for short bit or their family, to try and go there and recruit,” Smith said.

Smith wants the community to take an active role, not just in neighborhood groups, but in joining the force as well.
“ I think police work is a noble career. You come from the frame of mind that we’re trying to do the right thing for the right people,” Smith said.  “That doesn’t always pan out right. Sometimes someone goes to jail. But it’s in the spirit of helping somebody else. It’s not because we want to inflict some sort of power or position over somebody. It’s because this is a needed thing to help someone get relief, and that’s what we do.”