“Dear Madam President” is for changemakers and peacekeepers alike

In her new “Open Letter To THe Women Who Will Run The World” Jennifer Palmieri gives advice to girls and women alike about how they can effectively run for office in today’s society. It discusses the 2016 election in ups and downs giving the reader insight into the Clinton campaign. 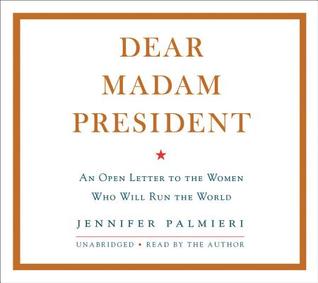 Usually when I read anything that has to do with politics I am left feeling downtrodden and even hopeless about the future of our country. However, when I dove into Jennifer Palmieri’s new book I was left with a different outcome. Dear Madam President left a refreshingly good taste in my mouth as soon as I finished reading it. The idea behind this book is “An Open Letter to the Women Who Will Run the World.”

The author, Jennifer Palmieri, has gathered advice from her many years of working in the white house for the Clinton and the Obama Presidency, she also ran the 2016 Hillary Clinton Campaign. Palmieri offers a personal narrative about what she discovered during and after the 2016 presidential election. Her informal style of weaving in advice after personal narrative makes the book extremely easy to read.

As I am a huge fan of politics, feminism, Hillary Clinton: three things that the entire book is based on, I was automatically drawn to this book. Even if you’re not a fan of these things, every women, in fact every person, would get something from reading this book.

When I first started reading this book I felt unsettled, because I thought that reading a book about something that happened in the past couldn’t change anything, but as I read, I realized how important it is to review and learn from the events that occured over the election.

This book also portrays political figures, especially Hillary Clinton, in a more humane light. We tend to dehumanize politicians, especially when they’re women. We ignore the person behind the campaign and focus more on their image.

Yes, Palmieri is biased, and the content is definitely geared towards the more liberal reader. However it is my opinion that the advice that Palmieri gives the reader is actually really useful, not only for women pursuing politics but also for women who are trying to be successful and create good and lasting change in the world today. This book definitely isn’t life changing but it does give an insightful and subjective outlook on the outcome of the 2016 election.

Something that struck me the most was  that as women, we have to create our own new path for leadership in America. It is not enough for us to try and play catch up with the men who have been taking the reigns of our country in their hands for, well, the entirety of the history of the United States. Yes, we as women in America have made great strides, but we still have a long way to go.

This book gives me much needed hope for the future of American Politics, as Palmieri said, “Women aren’t just running for office in record numbers; they are winning in record numbers, too. In the worlds of art, politics, and business, women aren’t following anyone’s rules – they are creating their own game.”

This is how women are changing the world.