“Nine to Five” is nominated for Blue Star Award

The fall musical, “Nine to Five,” was nominated for Outstanding Costume Design and Construction. 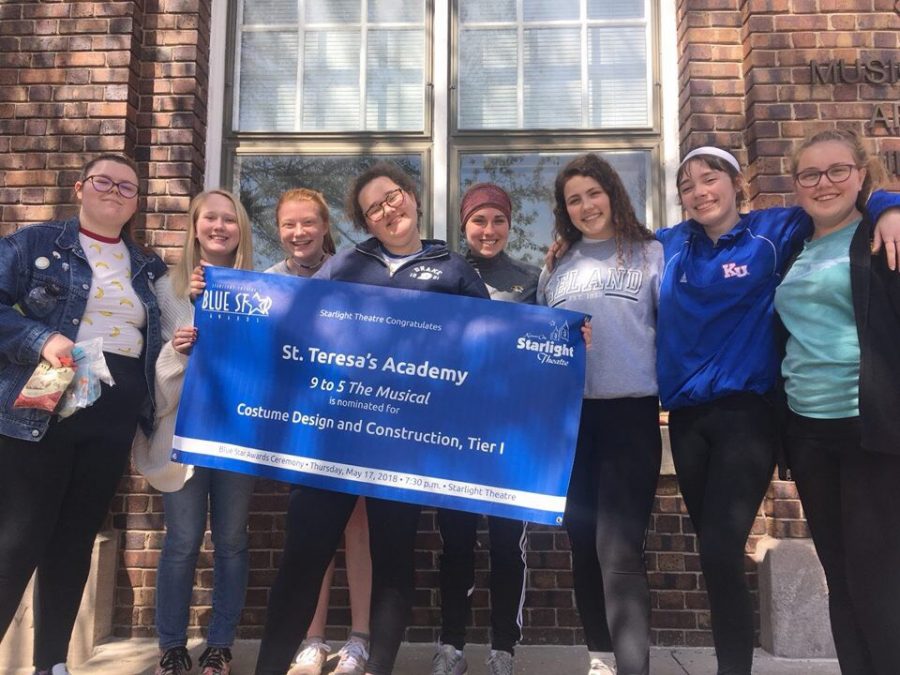 Costume crew of "Nine to Five" was nominated for the Blue Star award April 26. The banner was revealed by drama teacher Shana Prentiss at the steps of the M&A Building. photo courtesy of Shana Prentiss

Blue Star Awards are modeled after the Tony’s and are given out through Starlight Theater to high school students throughout Kansas City.

Atkins’ first show on costume crew was “The 25th Annual Putnam County Spelling Bee” when she was a sophomore, and it was this show that got her to where she is today. Atkins says the goal is always to improve the quality of the musical, since it is the only controllable variable.

“Our goal was just to create costumes for everyone that were true to the time period, looked good on stage, and fit the show and characters,” Atkins said.

“[The nomination] was a big surprise to me because it never came across to me that we would win an award for our work,” Boxx said.

When theater teacher Shana Prentiss unveiled the banner, Atkins was overwhelmed with emotion.

“Never in a million years would I have guessed that our nomination would have been for costumes because the entire cast and crew did so so well,” Atkins said. “It was such a surprise when Mrs. Prentiss unrolled the banner, which kind of explains why I burst into tears.”

The Blue Star ceremony will take place May 17 at 7:30p.m. at the Starlight Theater.