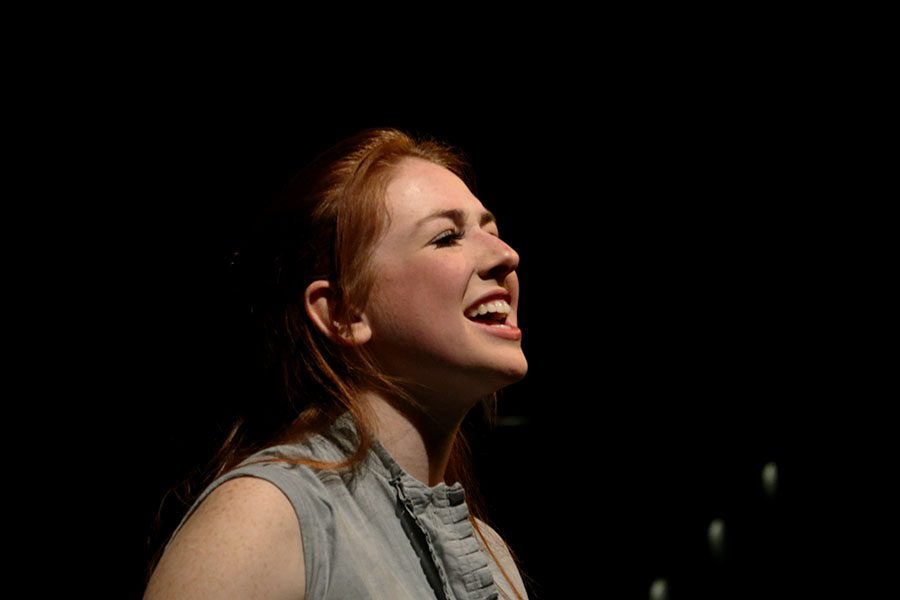 by Reagan Penn and Kate Jones

Senior Katie Willnauer scrolled through the cast list for “Bonnie and Clyde”. Without looking to see who would play Bonnie, she scrolled through looking for her name. As she continued scrolling, she had yet to find her name. Disappointed, she scrolled back up to the top and  as she was about to close the document, she saw her name across from “Bonnie Parker.”

“I literally screamed,” Willnauer said. “My mom was making dinner, and I’m pretty sure she spilled half the soup on the floor because I screamed so loud.”

Since her freshman year, Willnauer has been in nine musicals at STA and Rockhurst. Willnauer, who had always been involved with choir, became interested in theater after going to a musical.

“I saw ‘High School Musical,’ and I thought ‘This is really cool,’” Willnauer said. “When I was in eighth grade, my brother did the musicals [at STA] and at Rockhurst. I was so proud of him, and I wanted to do it too.”

She auditioned  for “Into The Woods” her freshman year at STA and “Fiddler on the Roof” at Rockhurst. She was a part of the cast in both musicals and has continued to be involved in STA and Rockhurst musicals, “Bonnie and Clyde” being her ninth musical and first lead.

Auditioning for Bonnie and Clyde felt like any other audition for her. The audition felt the same as it had in past years when she had been cast as ensemble. However, after regular auditions, Willnauer got a call back for Bonnie and Blanche, another character in the musical. At this point, Bonnie was still not a possibility in Willnauer’s mind.

“I was thoroughly convinced I was not going to be Bonnie,” Willnauer said. “Regular auditions happened, and I was running through the motions again. [I thought I was] going to be ensemble, which is not a bad thing.”

Willnauer was then casted as Bonnie Parker, the lead. When Willnauer learned her role and said it was surreal.

“I felt like I was almost excited for a friend,” Willnauer said. “That wasn’t happening to me.”

As the lead, Willnauer is faced with several responsibilities, as being the lead requires being a leader.

“Your relationship with your fellow cast members has to be really strong,” Willnauer said. “For the most part it’s really nice because we lead the atmosphere for the kind of people we want to be around.”

Bonnie and Clyde was shown at Rockhurst March 22-24.