After the success of last year's symposium, Jacquin aims to leave another lasting impact this year. 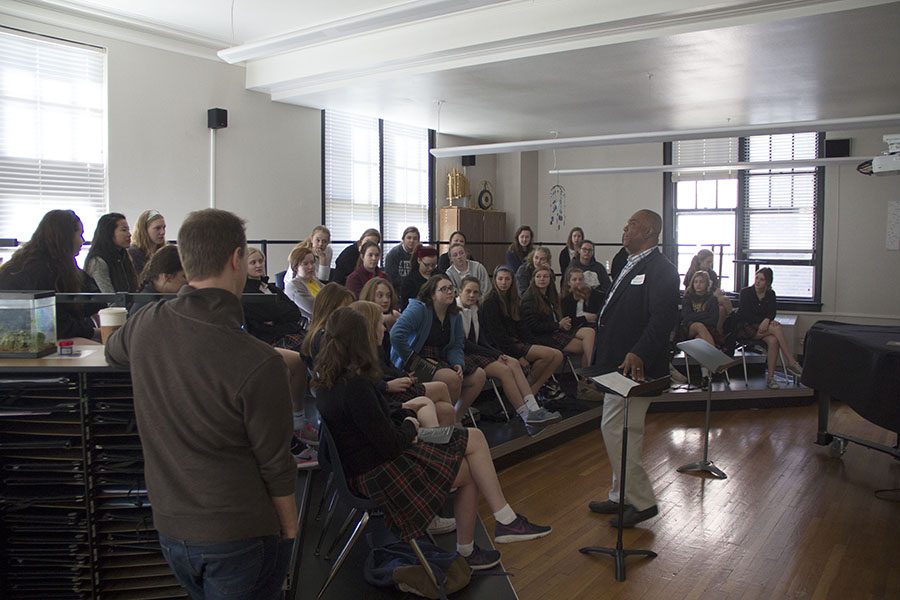 Students listen intently to speaker Martin Okpareke of the Jewish Vocational Service as he addresses struggles with refugee resettlement during the Women’s Symposium March 3. Librarian Carrie Jacquin began the Women’s Symposium to help students understand the work activists do in the community. photo courtesy of Brad Lewis

The classroom is near silent as students lean forward in their seats and listen intently, stricken with disbelief. Some hold back tears while others are simply confounded by every word. They listen to the stories of Joe Amrine and Reggie Griffin, who spent 17 and 23 years, respectively, on death row for crimes they did not commit.

Sitting among the students is librarian Carrie Jacquin, who watches all of the students visibly react to and absorb the message the exonerees share about the cost of the death penalty. Presentations such as these are what comprise the Women’s Symposium, which was held Feb. 23. It was these messages of injustice that prompted Jacquin to initially propose the idea for a symposium back in 2016.

“The idea of the symposium was to bring in speakers and experts to talk to students about the work that they do here in our community and the activism that they participate in around the issues that they care about,” Jacquin said.

The symposium grew out of the freshman English project Jacquin assigned to her classes, where students choose a topic to research that deals with an issue impacting women. They then research their topic through documentaries, databases and both fiction and nonfiction books.

“I think we’re in a unique position here at St. Teresa’s,” Jacquin said. “With my research project, I wanted to focus on things that I thought were going to impact you guys and be issues that you would be dealing with. Knowing all of you guys were going to go off to college, the fact that one in five of you would experience a sexual assault is horrifying to me.”

Although Jacquin began planning the symposium to include the core women’s issues she used in the freshman project, such as sexual assault and human trafficking, she then branched out to include other social justice issues in the community, such as food insecurity and homelessness.

“Regardless of whether it seems like a women’s issue at its core or not, women seem to be kind of at the forefront of drawing attention to [social justice issues] in some cases and making change happen around them,” Jacquin said.

Executive Director of Missourians for Alternatives to the Death Penalty Staci Pratt, who spoke at the symposium last year and returned this year, may not speak for solely a women’s issue but an urgent one nonetheless.

“As administered, the death penalty is a broken and arbitrary method of pursuing criminal justice, which is tainted with racial bias,” Pratt said. “We strive to give a voice to those on death row, their families, jurors and others impacted by capital punishment to show that the current system creates endless suffering.”

Pratt felt compelled to join the fight to end the death penalty after 10 people in Missouri were executed in 2014. This concerned her because she felt that government, as a human institution, is fallible and knew of instances where people were exonerated after spending decades in jail. According to the Death Penalty Information Center, 26 states have had at least one death row exoneration, and three of those states no longer have the death penalty.

An aspect of the Women’s Symposium that makes it especially unique is the use of local community activists. Sophomore Anne Chapman, who was in Jacquin’s English class last year and completed a project on human trafficking, admits she does feel more inspired by local change agents.

Chapman began her research project unaware of how frequently human trafficking occurred, so she was shocked at what she discovered about local human trafficking problems. According to the National Human Trafficking Hotline, the state of Missouri received 421 calls with 135 human trafficking cases reported in the year 2016 alone.

“We need to bring in more of a centralized way to combat these issues,” Chapman said. “ If we bring in instances where human trafficking is happening in our own city, or sexual harassment is happening at high schools around Kansas City, it adds more of a need for them to be stopped, and it adds more of an emotional connection to the topics.”

After the symposium’s debut last year, Jacquin submitted a form request, and the Women’s Circle of Giving granted her the money to be able to put on the symposium this year. The Women’s Circle of Giving is made up of philanthropic women who pool their contributions to distribute to the STA community for needs that could not be met or pursued within the current operating budget.

After reading the freshman and sophomore class survey responses following the symposium, Jacquin was able to evaluate how the day went for students and figure out how to plan better in the future.

“Overall, there were requests for different sessions, so this year we added animal activism and we’ve added a session about LGBTQ resources,” Jacquin said. “So I’ve really appreciated the honest feedback I got on the survey after the event and tried to put some of those things in place.”

One new option in particular caught the eyes of sophomore Brooke Fallis. Fallis is already involved with animal activism outside of school, but looked forward to seeing what the speakers had to say about being an animal activist and how to become more involved.

For Chapman, the new civil discourse session seemed particularly interesting. Civil discourse is engagement in conversation intended to enhance understanding of other’s opinions. Chapman hoped that attending this session would help her hold more respectful arguments with people she disagrees with.

Although some students may not feel that they will be impacted by these topics, Jacquin feels the speakers that come are able to connect with them through vivid experiences in activism or community organizing.

“The sessions that had the most impact on students last year were people who were able to tell a story or tell other peoples’ stories,” Jacquin said. “I think once you hear someone’s story whose life has been touched by the opioid crisis or human trafficking or homelessness, that just builds empathy across our entire community for other things that we may not experience ourselves.”

Pratt agrees with Jacquin that telling stories is very effective in spreading awareness since it can help us understand the world. She feels that by listening we can better understand and act for change.

“The voices of the marginalized are often lost,” Pratt said. “Many of us do not encounter them in our daily lives. Joe and Reggie courageously share their real-life experiences of death row. When you listen to them, you cannot help but translate capital punishment from an abstraction to the actual taking of a human life-the very person who stands before you.”

As Joe and Reggie finish their stories, Pratt notices students are both attentive and reactive, clearly connecting to the narratives shared and the larger issue. Her mission is accomplished.

“These stories can help awaken a desire to create social justice and end the death penalty through concrete action,” Pratt said. “It is possible to change our world, and I see young people being at the forefront of that.”