The new calligraphy club, starting this semester, welcomes students interested in calligraphy of all levels. 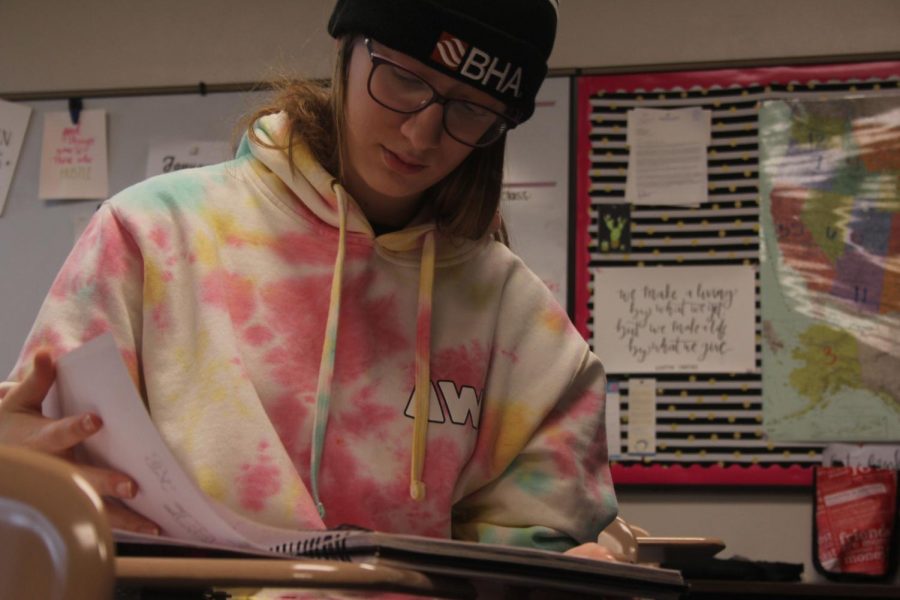 As the activity bell rings, a group of juniors walk toward room D007, where pens, markers and paper sit on desks. As they take their seats, junior Isabelle Fleming prepares to lead the first ever calligraphy club meeting.

Calligraphy, also known as decorative handwriting, has been one of Fleming’s hobbies for years. She got the idea of turning her love of the art into an extracurricular while she was sitting in graphic design class in early December.

“I was just thinking one day about how much I like to do calligraphy and I know other people are interested in it,” Fleming said. “I wished there was a way that we could all share ideas and do it together”

Once she had the idea to start the club, she proposed the idea to social studies teacher Anne Papineau, who runs an embroidery shop online and often does calligraphy. Papineau was happy to help out with the club and hopes to help teach members how to do calligraphy.

“In today’s world we’re so rushed and it’s nice to hearken back to those days of lettering being almost a form of art,” Papineau said. “It’ll be different than anything I’ve done with students. I don’t usually do any art form clubs.”

Fleming sent out a Google form to the junior class to gage interest in the club, and was surprised to see about 30 responses. However, Fleming and Papineau both agreed on limiting the club to just juniors this year because Papineau’s room had reached max capacity.

Junior club officer Lauren Daugherty shares Fleming and Papineau’s love of calligraphy and feels that they will be able to accomodate any skill level in this club.

“For our first meeting we talked about teaching the other members some basic lettering,” Daugherty said. “It’s not a requirement to know how to do calligraphy to be in the club, but having an interest in doing it is.”

Fleming agrees that she does not want to limit the club to high skill level. She considers this semester a trial run, and cannot wait to share calligraphy with people who are passionate about it.

“I feel like there are so many opportunities for this club to do things,” Fleming said “Mrs. Papineau told me that we could design the Junior Ring invitations, which I think would be super cool. There’s so much potential for it.”