For the swim and dive team, the vans are just another part of the experience. 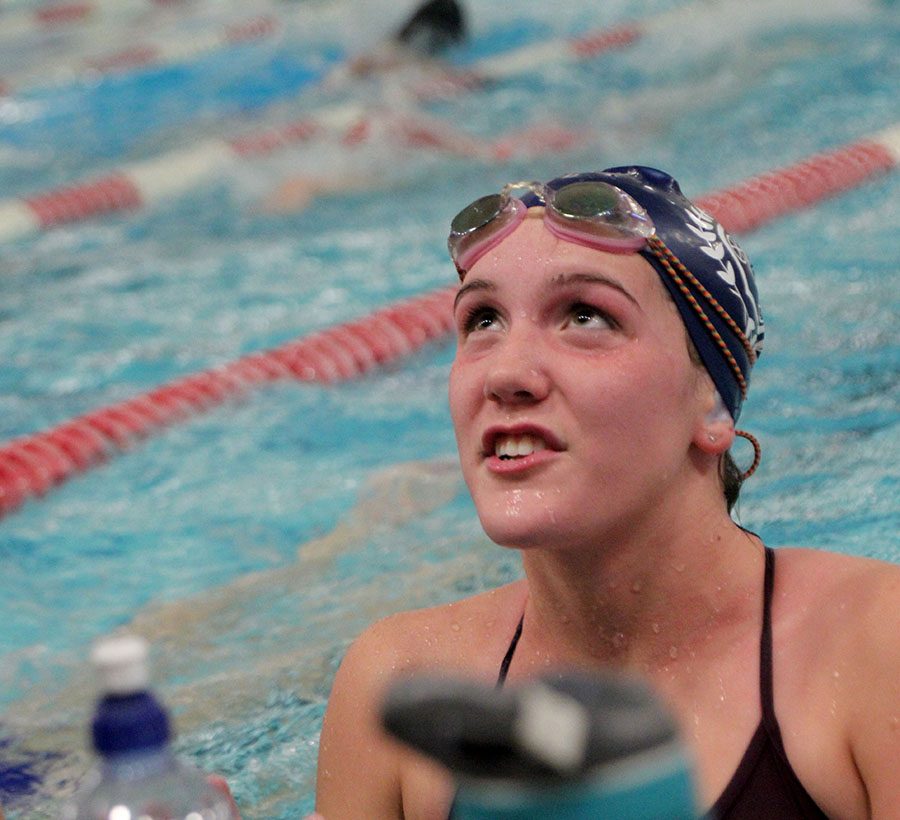 Senior Maddie Adam looks up at coach Kelly during swim practice Nov. 14. Adam has been swimming for STA since her freshman year. photo by Riley McNett

As the bell for the end of the school day rings, freshmen Marie Bruck and Erin Graham head to assistant swim coach and teacher Andrew Meyer’s room. Once everyone arrives, they race to the vans, all fighting for a seat upfront. They then drive 30 minutes out to Longview Community Center for swim practice for an hour and a half. When practice ends, Bruck is picked up and drives home whilst Graham gets in the van once more before arriving at STA and being picked up by her parents.

Graham and Bruck are two of the 28 girls on swim team who uses the van to get to and from Longview Community College, where the STA swim and dive teams practice.The vans provide transportation for students so that parents don’t have to worry about transportation. The drive takes fifteen minutes without any traffic but Schirger says it generally ends up being a 30 minute drive.

The swim team practices at Longview Community College as it is one of the few facilities that allows the swim and dive teams to practice right after school and fit the whole team.

“I would like to use a closer pool but I know it’s hard to to get in with scheduled timings and there are other teams that need to practice,” sophomore Elizabeth Schirger said.

Graham and Bruck weren’t surprised they had to drive out to Longview for practice as they had already been practicing out there already.

Using an off-campus pool for swim and dive team is pretty common in Kansas City as not every school has a pool on campus according to assistant Athletic Director, Tyler Abney.

“Traveling off campus to practice is just the nature of the beast,” Abney said. “At this point your options become drive to practice just as you would in the summer and other off-season sessions, or don’t swim.”

On the way out there every seat in the van is normally taken as the girls fill in with all their bags,which are then shoved under seats and on laps. The sound of talking begins to fill the van, often causing the driver to remind them several times to lower their voices. The question of, “does anyone have some food?” is asked multiple times, usually with a negative answer.  Music is constantly being blared, sometimes chosen by the driver and sometimes chosen from the girls.

“It’s nice to see the girls get to spend some time which each other,” Hough said. “I think they have fun with it. The drivers say the girls are generally having fun. And I suppose if they choose to they could knock some studying out as well.”

The bonding has also lead to some pranks, something assistant coach Amanda Johnson-Whitcomb is a first-hand witness to.

“The first time I drove the van, I wasn’t a coach at this time,” Johnson-Whitcomb said. “The girls thought it would be funny to not say anything when I took a wrong turn and thought I was going the right way. They didn’t want to go to practice so they were stalling and we were thirty minutes late because I went the wrong way and no one told me, it was so embarrassing so I had to go in and tell Rob [Cole] what happened. I felt like such a ninny but it was pretty funny. We bonded.”

Not everyone returns on the van, as for some it’s easier to drive straight home, causing more space on the vans.

“On the way back it’s less crowded as not everyone comes back and it’s slightly more calm,” Graham said. “Although, it depends on the night.”

The vans are not mandatory for swimmers and divers to take and many girls drive themselves.

“It’s mostly freshman as the upperclassmen drive themselves,” Bruck said. “We all get to talk and it’s good bonding time. “

Teachers get sent an email to register to sign up to drive the van and there’s generally two or three consistent drivers. Johnson-Whitcomb was one of the faculty who drove everyday last year and occasionally drives this year.

“It’s kind of fun to be driving in a big van as opposed to just three or four people in a car,” Johnson-Whitcomb said. “It’s fun to have a bunch of girls. It’s also a little distracting, and as the driver you have to be very conscious of many teenagers in the van.”

Johnson-Whitcomb said the drive out there also has it’s challenges, the main one being the duration of the drive.

“The downside is you do have to travel 30 minutes away from school and 30 minutes back so that is an extra hour away from doing homework, time from family or doing others things,” Johnson-Whitcomb said. “So it is a larger commitment. Swim team is a different commitment than other sports. And that’s not to say that other sports don’t have just as much or intense commitments, it just looks different for swim team because there’s more travel involved on a daily basis.”

For Schirger, the drive was a big part of whether or not she would do swim again.

“I almost didn’t do swim team because Longviews kind of a haul,” Schirger said. “It takes a lot out of your day. It’s hard to manage homework and school with the drive and it’s far from STA but it’s nice that we have vans that take us out there so that our parents don’t have to drive.”

Sophomore Avery Owens also found that the drive was a big part in the decision of choosing to join the team again, although in her case she opted not to join again.

“A big part of why I didn’t do swim team was because the drive was so long,” Owens said. “I’m driving this year so I didn’t want to drive on the highway for 30 minutes there and then on the highway 45 minutes back to my house during rush hour. I just don’t think I could handle that everyday.”

For Schirger, she’s glad she made the decision to join the team again.

“It’s a lot of time so you have to be dedicated but you get to spend time with your friends doing a sport you love.”