Senior Hailey Coleman, sole senior on varsity, does not know what to expect with the new coach. 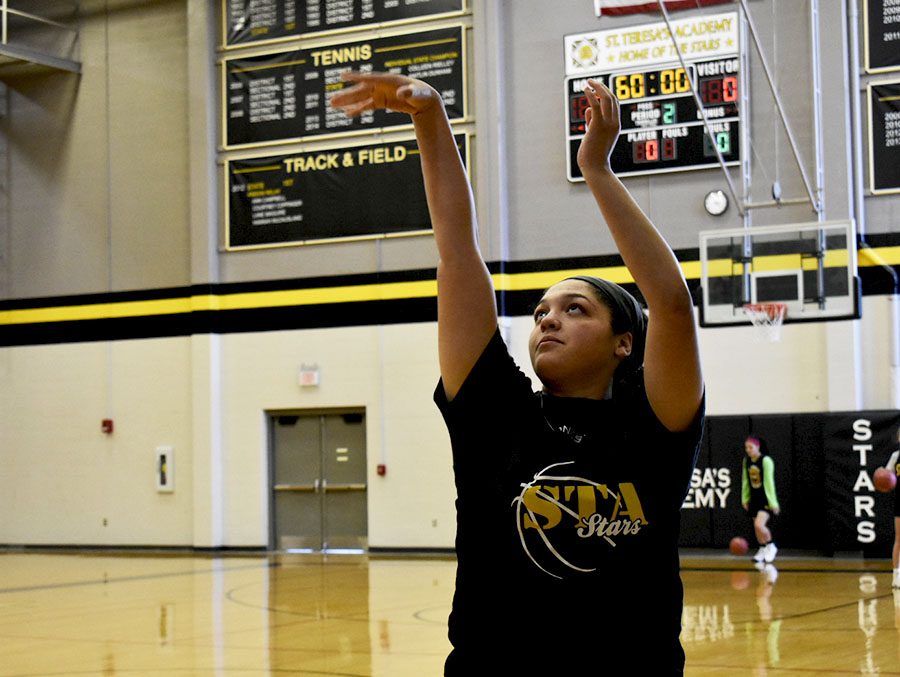 Senior, Hailey Coleman, shoots the first day of basketball tryouts Oct. 30. Coleman is the only senior trying out this season.

As the air begins to get chilly and hands start to freeze, a new sports season lurks around the corner. Basketball has begun to make an entrance in the last weeks of October, and sole senior and varsity player Hailey Coleman prepares to start the season. As athletics start to shift indoors, she gets ready for the long, labouring season with motivation.

With this season comes new head varsity coach Christy Collins who is ready to finally be back in season.

“I am very excited to start with STA this season,” Collins said. “I had to take last season off because I had a baby, but it’s very awesome to be back in the gym and working with the high-caliber athletes we have here at STA.”

The traditional pre-tryout nerves were in the air, and Coleman had a bigger weight on her shoulders.

“I’ve been the only one[in my class] since sophomore year,” Coleman said. “I think it’s going to be different because last year, there were four seniors, but I was still captain over two of the seniors who played. It’s going to be weird to transition from looking up and being one of the people to go to but now being the only one for players to go to.”

Coleman believes that last year’s basketball varsity coach, Amanda Hanneman, and Collins are not that different. The school is also receiving a new varsity assistant coach and former WNBA player, Kiera Hardy. Overall, Coleman is excited to see how the new coaching staff will change the program. With the change from Hanneman to Collins will also come new drills and terminology.

“Since the majority of the coaching staff is new, that’s going to be interesting,” Coleman said. “The older coaches know you better than the head varsity coach, and that’s going to be weird. Last year, everyone kind of went in with an expectation of the drill, but now everyone is starting from ground zero. [Regarding the new assistant coach], I think it’s awesome that she was able to play in the WNBA, and I look forward to her coaching style. I really look up to her.”

Collins is not worried about the bond between the coaches because she was notified of the opening due to her past coaching ties with coach Andrew Boland.

“I actually coached with coach Boland while we were both at Bishop Ward High School,” Collins said. “He let me know that the former coach here had left, and I was able to get my application in.”

Previously having coached the boys team at St. Mary’s, the transition to the school’s all-girls program might have its struggles, but Collins disagrees. Starting as head of the basketball program does not scare Collins away despite never having coached here before.

“I think basketball is basketball, so as long as you have athletes who want to work hard and get better everyday then it should be a pretty easy transition,” Collins said. “I’ve been a head coach for a long time. From that aspect, I have quite a bit of experience, so it’s pretty much the same but with a new group of kids.”

Collins is nervous about the expectations the fall sports have set for basketball. She worries about whether if they will be able to live up to them.

“The bar has been set really high with STA’s athletics as far as the volleyball team and the cross country team going to state, so I am nervous about that because I want to make sure that our basketball team gets there,” Collins said. “I want us to be as competitive as some of these other teams.”

Tryouts begin, and students step into the gym, the emptiness and wide ceilings welcoming them. Coleman and the upperclassmen set the stage by beginning form shooting, a drill they learned from Hanneman. They focus on their shooting as the tryouts draw nearer to the start. Beep beep! Collins blows her whistle after what felt like eternity and says, “Balls up! Meet in the middle!” And the tryouts commence.

After players compete to perform their best for three days, the tryouts conclude with the team reveal. Players wait outside the athletics office, anxious to know if they made the team.

Collins had perceived the amount of talent that was shown at tryouts even after it ended.

“I actually was really pleasantly surprised,” Collins said. “I knew the caliber of players that we have here at the school. I saw a lot of quickness and hard work, and I see us being successful. We have a really solid team.”

On the other hand, Coleman was hesitant going into tryouts. The new coaches and the sophomores were still enigmas to her, but after playing for four days, she learned a little more about them.

“I was just kind of anxious going into tryouts, but now I kind of know what to expect from the coaches,” Coleman said. “A lot of sophomores tried out which was more than there usually are, but I was impressed with them.”

As the only senior, Coleman realized that she had to step into the leadership position and remind the players to listen to the coaches.

“It’s not so much that it’s hard [being the only senior], it’s just a new role,” Coleman said. “I don’t really like to yell at people and get on people, but I feel like I’m the only one that’s going to do it.”

Both Coleman and Collins see the problem with relationships between the team and the coaches. Collins wants to show the players what the coaches’ envision for the team.

“Overall, I think the biggest thing right now is trying to get the girls to learn [about] us, as a coaching staff, so they can get used to us and to show them how we run things,” Collins said.

As tryouts ended, Coleman immediately showed excitement for the season to get underway.

“[I’m excited for] games,” Coleman said. “Sion games. I’m excited for when the season starts rolling around and we officially start playing.”