The Golf Team grows in Size and Friendship

With the golf team more than doubling in the last four years, the team has really grown closer 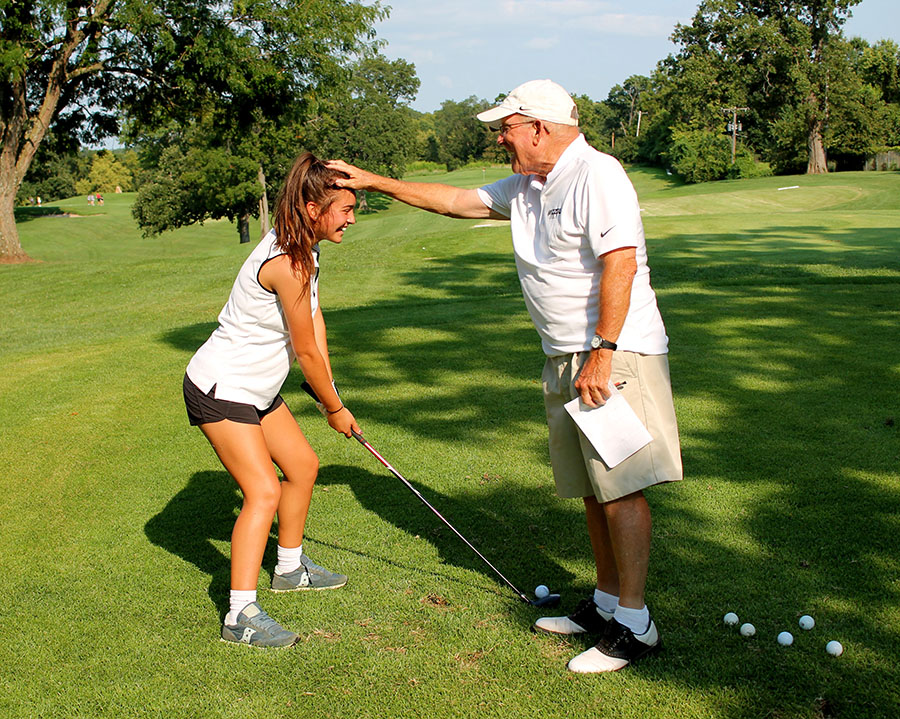 Sophomore Julia Flores, left, listens to coach Jack Garvin as he adjusts her form at the Heart of America Golf Academy Sep. 1.This is Flores’ second year on the golf team. photo by Meghan Baker

by Katy Rouse and Meghan Baker

As senior varsity golfer Emma Anielak walks up to the tee, she is surrounded by her supportive teammates. She has been golfing ever since second grade, but this team feeling is still new to her.

“When I was a freshman there was only 12 people on the team, three people from each grade and that was it,” said senior, Emma Anielak. “It was very small and the teams were very distinct and you didn’t really talk to the seniors.”

Over the last four years, STA’s golf team has more than doubled in numbers. While many freshmen are not surprised by the size of the golf team, the seniors have had to adjust to the team’s growth. As the years progressed, things started to change, and the golf team grew from individuals into one strong team.

“It’s definitely more of a team feel even though it’s such an individual sport,” said Anielak. “It’s kind of hard to get that feeling unless you’re surrounded by a group of people that are so supportive and so happy when you do well. You’re challenging your teammates to do well and you want everyone to improve and just get better.”

With the growth of the golf team, comes more competition. More people are fighting for a limited spot on the teams, with only a certain number of players allowed in tournaments each week.

Some of the golfers began golfing only before freshman year, which means that they had to learn very quickly. Many golfers would credit the team’s winnings to all of their coaches, but head coach Martha Linscott in particular.

“We wouldn’t be where we are today without our coaches,” said Ryan. “But especially without Martha Linscott. She is the reason why STA’s golf program has grown. She works so hard to give us all an opportunity to learn, grow and compete. In the process we have fun too.”

Although some might expect the team to not be close because of the competitiveness, it is actually the opposite. The team has grown closer because golf is such a mentally grueling sport. When a golfer has a bad round, their teammates are always there to lift them back up.

“Mentally, it is so hard, so tough, I’ve fallen apart in tears,” said Ryan. “So when I see a girl doing that on my team, I’m just always very supportive, keep your head up, smile, we’re here for you, don’t even worry about it, you got the next one.