Class of 2017 wraps up Sion rivalry in powder puff game

St. Teresa’s Academy seniors teamed up for one final game against rival Notre Dame de Sion in the annual powder puff game at the Kevin Gray Field May 22. 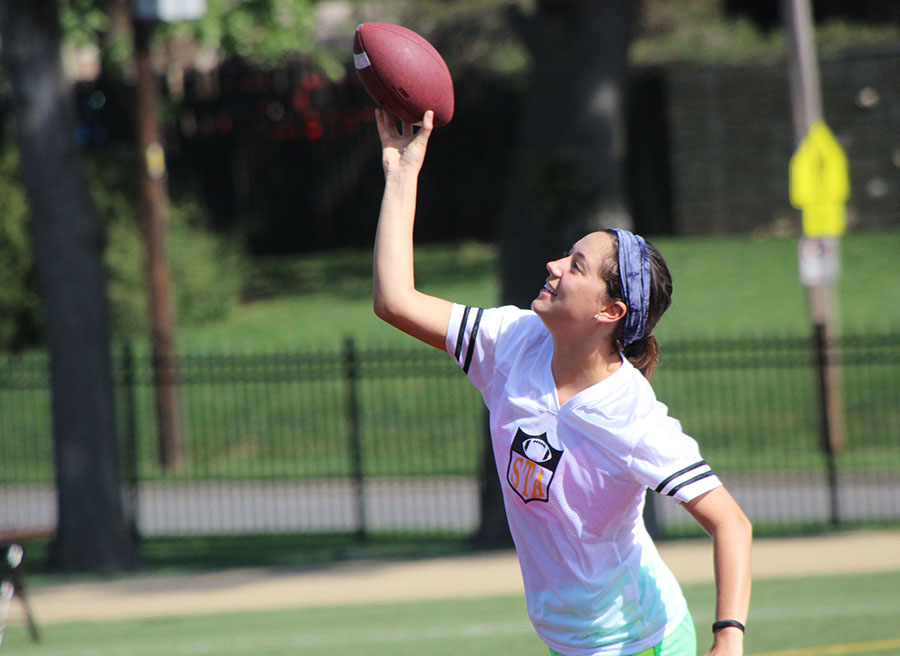 by Gabby Staker and Meghan Baker

About 20 seniors trickle onto the field at 9:30 a.m., Monday May 15. They’re wearing white mesh football jerseys and tennis shoes – ready to play. They warm up, tossing around a leather football and huddle up when their coach, STA athletic director Mark Hough, arrives with a duffel bag. He begins talking about post routes and tucking the ball, then sets up a basic receiving drill to test catching ability. Practice begins.

The first six passes are completed smoothly, then senior Claire Fiorella drops hers and there’s a streak of fumbles. “Oh I forgot what play it was!” senior Maura Knopke yells as the ball lands in front of her. “What are we supposed to be doing?!”

It’s a light-hearted atmosphere, with girls pointing out almost every turn how funny it is.

Fiorella rotates through the lines and on her next turn bobbles the ball before catching it. “I’m so excited! I’m just having so much fun, I’m jittery!” she shouts as she runs it back.

The powder puff game, a recurring tradition between STA and Notre Dame de Sion seniors, will take place May 22. It’s a flag football game – the culmination of a rivalry that’s seen Avatars and minions, 101 Dalmations and daycare, clowns and royalty. The final theme for the class of 2017: “out to get meat.”

It’s an event that has been building for the last four years – especially for Fiorella, who remembers hearing about it since she was a freshman. She thinks of herself as a competitive person, but doesn’t play with “a mean-spirited competitiveness.”

STA senior class president Gabby Ayala is in charge of organizing the game with Sion class president Elsa Brundige. According to Ayala, there are 60 girls from STA who are going to play.

“I think the biggest challenge is trying to get everyone involved,” Ayala said. “You want everyone to play but can only have seven on a field so it was tricky to figure out how to make everyone play. In the end it’s really fun to organize. The more practices or little meet ups we have the more pumped we get to play.”

Two practices and some self-evaluation lead senior Sophie Cuda to believe the team, coached by Hough and theology teacher Andrew Boland, is ready.

“Everyone can throw the football pretty far and we have some really fast people – a lot of soccer people,” she said.

Cuda has been teaching all the players the dance from “Remember the Titans,” so they can perform it before the game starts. She says the idea came from looking back on freshman year and remembering that she and senior Paige Powell became best friends after realizing they both loved the movie.

Cuda is going to the University of Missouri, and like most seniors, will find herself thrown into new, serious rivalries. Examining the dynamics between STA and Sion, however, she finds it more lighthearted than most people think.

“At first, when you’re a freshman you’re like oh, it’s so intense, and then as you get older, you realize it’s funny and with your friends it’s a sweet thing,” Cuda said. “You always yell at each other and it’s fun when you’re friends with people from Sion because you can get so angry at them during a game and then it doesn’t matter [afterward].”

When asked if STA is going to win the game, she replied confidently, “Yes! Of course we will.”

Senior Claire Benge believes the game is an opportunity for girls who have never played a school sport to really contribute to the STA/Sion sports rivalry. She will be on defense, subbing in as one of sixty girls in a seven-player game. In order to tackle the 53-person bench, they’ll play in groups organized around the quarterback, going on at different times.

It’s sentimental for seniors, as they reflect back on their four years in one of their last school events, after Class Day and graduation.

“STA just seemed so big the first day,” Benge said. “And then by the end of your senior year, you just know everyone and you feel so comfortable with the school.”

Their first day of freshman year at STA, the class of 2017 walked onto campus not knowing what to expect. Now, on one of their last, they’ll walk out onto the Kevin Gray field, having learned it all. They’ll wear their white jerseys, Cuda will lead her classmates as they reenact the dance from “Remember the Titans,” and the game will begin – the last hurrah between two classes from two schools that have shared an incredible bond.

Check back with Dart News Online for an updated story with scores and game coverage after the game May 22.