Nobody Puts Kenzie In The Corner: The 59th Annual Grammys

Well, I didn't expect to be writing this one. 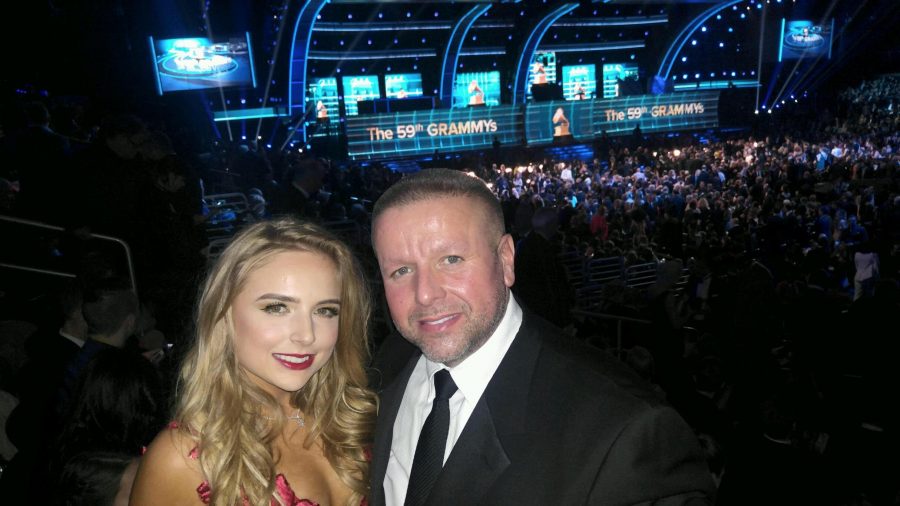 It’s Mack, reporting to you live from the lobby of the JW Marriott here in Downtown. My hotel is literally less than a minute’s walk from the Staples Center, where I found myself last night in the same room as artists from Rihanna to Metallica to Chance the Rapper. There’s a lot of half-hungover stars and coffee cup clad executives meandering about, meeting over their laptops or tugging their bloated suitcases towards checkout. Some maintain this air of blasé tiredness (“The giftbags were better last year,” “The awards just aren’t what they used to be,” etc.), and others (like me) are newly inspired and buzzing with the residual energy of last night’s event. I still can’t believe I was there. And, while I loved being completely done up in an evening gown and stilettos, I’m glad to be back in my typical black button down, coffee in hand and reverted to my normal messy toddler height self, curled up over my laptop and ready to recap the event with you as I experienced it.

So, the Grammys may “start” at 5 PM Pacific time (that’s 7 PM in KC), but they don’t really start at 5:00 PM. Red carpet begins at 3, which means hair and makeup starts at 11:00 AM. “Music’s Biggest Night” is really “Music’s Biggest and Longest Day”. I literally had to catch an Uber in the middle of a morning breakfast meeting to get back to my hotel on time to get ready for the night. Let me repeat, I had to leave breakfast early to prepare for an evening event. Ridiculous! Sacrilege! Breakfast is my favorite meal!

Back to my room and I hop in the shower. By the time I’m out, my makeup and hair stylist Jacqueline is in the room and sits me down (hair and body still dripping) to immediately start putting on my face for the night. It isn’t even noon, but I have to be dressed and out the door by 3:00 PM, so we begin the incredible endeavor of cosmetic transformation. At some point, my stylist Teresita shows up. I’ll spare you the gruesome details of just how much duct tape was used to get me into that beautiful dress and its plummeting neckline. Horrifying.

Also, because I’ve gotten MANY questions about my Grammys look, here’s a small gallery with a few photos of the whole deal!

So, after hours on hours of playing Barbie doll for Jackie, Teresita, and Strange Music Executive Assistant Kaitlyn, 3 PM comes and ushers my tuxedo-wearing father Travis O’Guin and I down to the hotel lobby, which is absolutely PACKED. Packed! Women in dresses, men in tuxes. The short stretch of sidewalk between Staples and the hotel is even crazier – celebrities sweeping through the crowds of spectators, people in plainclothes wielding cameras and cell phones, staring starry-eyed at the Grammys attendees. Sometimes I forgot which side of that dynamic I was supposed to be on, until one of the pedestrians would stop and stare with this “I don’t know who she is but maybe I should? Should I know who that is?” expression. No, friend. You should not know who I am. I don’t even know what I’m doing here.

With that, we enter the building. It was like entering a Twilight Zone, and there was one thing I found especially hilarious. By the time you get inside the building and out of the chaos, you realize that in all the duct taping and Saran wrapping (yes, Saran wrapping) your body has undergone all morning long, you haven’t eaten a thing all day and it’s very much nearing 5 and you probably won’t get out of the show until 10 and you are absolutely starving. But, there’s no food at the Grammys. You can’t leave to eat and re-enter, you can’t bring food from outside Staples, and you definitely can’t bring it into the auditorium. Your only real option?

Yes, the only food is the Staples Center concessions. All around, A-list celebrities, women in intricate multi-thousand dollar gowns are brandishing Big Macs like clutch purses and men in silk suits are networking between mouthfuls of french fries. You go enter this exclusive occasion to see demigods dabbing fast food grease off their magazine cover faces. It was the most wonderfully hilarious and humanizing moment to see these beauty queens and kings desperately scarfing down fast food before what is one of our industry’s biggest events of the year.

After taking a few photos more and deciding against standing through the McD’s line, we embark to find our seats. We locate them, and I’m stunned. These seats are incredible! Second best only to floor level (which are reserved for the likes of the nominees and equivalent guests), the seats are stage right, diagonal from the center circular stage with a brilliant view of both that and the main stage. I’m freaking out, because I would have sold an organ for one of the nosebleed seats in the backmost corner of the auditorium. This is unbelievable. I was watching everyone slowly trickle in from the halls.

That’s when it hits me. I had one of those incredible out of body experiences where I felt like a switch had flipped and I was suddenly hyper-aware that, oh my god, this is my life. This is a real thing I’m doing. Now, mind you, I’ve been in the music industry literally my entire life, and I don’t get starstruck really. That sounds snobby, but it’s not, because I’m still profoundly affected by every experience the industry procures for me, I’m just affected differently because I’m not superficially dazzled by the shininess of the industry. What hit me is that I was at the same event that my icons had once attended. This event had hosted the likes of Tupac and Prince and TLC. Most my idols have had this experience, and some of them were about to experience it alongside me in that very auditorium. Suddenly, it’s all too much, and I start crying. Not tearing up, but face contorting, fights sobs, ugly crying. My dad hear’s me sniffle and looks over, alarmed.
“What’s wrong?!”
“I’m just *sob* really happy to be here.”
I manage to recover myself within about a minute and a half before being seen or ruining my makeup.

Now, here’s something else fun I hadn’t prepared for: if the media magnets are on the floor, who’s that sitting in the wings? Frankly, wannabes (like me) and industry execs (like my father). Which makes for fantastic conversations during the breaks. Before the show, my father gets up to grab some water. We were the first in our row to take our seats, and while he’s gone, the rest of the row slowly finds their way into their seats. Two women take their seats to my father’s right, one with black hair and one blonde. My father leaves to get some water before the show and the dark-haired one leans over to me.
“Where are you from?”
“Kansas City! What about you?”
“Wow, really? That’s awesome. I’m from Lebanon! But, I’m from New York.”
From Lebanon? From New York? Ha, casual, okay. I look at her arms, and I love her tattoos.
“Those are incredible! Where’d you get your work done?”
“Well, I’ve been to 37 countries and I’ve been tattooed in about 16 of those, so a few places.”
Okay, just stop. Shut up. Just, please, shut up. She didn’t even say it braggadociously, she was so genuinely sweet and apparently well-travelled. This is the type of person sitting around me? I want to be her best friend. I want to be her. Oh, Christ, I’m so in over my head. Think of something cool. I’m cool? I do stuff. I have this weird vein on my right hipbone, it kind of looks like a lightning bolt? Ugh.

Then, the awards begin. I won’t recap them in excruciating detail, but I will tell you my highlights!

Favorite Performance: Kelsea Ballerini-Lukas Graham
In my opinion, this was the most underrated performance of the night. I do not like country, so I was stunned by up-and-coming vocalist Kelsea Ballerini. Who came up with this duo? Artistically, the idea of mashing her “Peter Pan” with Lukas Graham’s devastatingly sobering “7 Years” is compelling in the conceptual juxtaposition. But for me, it’s Lukas’s unconventional style of performance I find most attractive: his jerking, accented gestures and remarkable immobility was stiff but intentional. For some reason, he reminded me of the Reverend George Whitfield. Not to say Lukas is an 18th-century evangelical, necessarily. You get the idea (hopefully).

Least Favorite Performance: Adele’s George Michael tribute
As a lifelong George Michael fan, I was thrilled by this tribute. From the get, it was beautiful and emotionally evocative, these gorgeous visuals of George alongside Adele’s heart-wrenching vocals. The performance was captivating, stunning, of a momentum unprecedented, and then– she stops. She starts the song over. She appropriates the moment, and suddenly, the performance was about her, not George Michael. The energy in the room died when she insisted on starting over rather than recovering from whatever mistake she made (a mistake so minute that neither myself nor anyone I asked even noticed it, nor would we ever have been the wiser had she not interrupted her own performance).

Weirdest Moment: Snoring Fella
The man behind me was asleep through most the awards. Snoring very loudly. How.

And, of course, don’t even get me started on the afterparty.

(If you want to know more about the afterparty, maybe my next post can be Grammys Pt. II? Let me know in the comments.)

Special thanks to Travis O’Guin for taking me to the weekend’s events (even though both of us are too antisocial for that sort of thing anyway), Jacqueline Rocha Castillo for tolerating my persistent demand for red lips/long hair (security blanket, anyone?), Teresita Marie Madrigal for the duct taping, Kaitlyn Toepperwein for being my roommate/life coach/personal assistant/confidante/partner-in-crime/maybe-walking-to-the-lobby-in-sweats-and-a-sports-bra-is-a-bad-idea-Mackenzie/pizza provider/cheerleader/savior the entire weekend, OG Inglewood Mugs for the coffee and also because I love you and also because you make that caramel frappe look gangster, and Dennys Ilic for also putting up with me all weekend.