Girls in the Blake advisory bond through their many parties and traditions which have developed over the last 23 years. 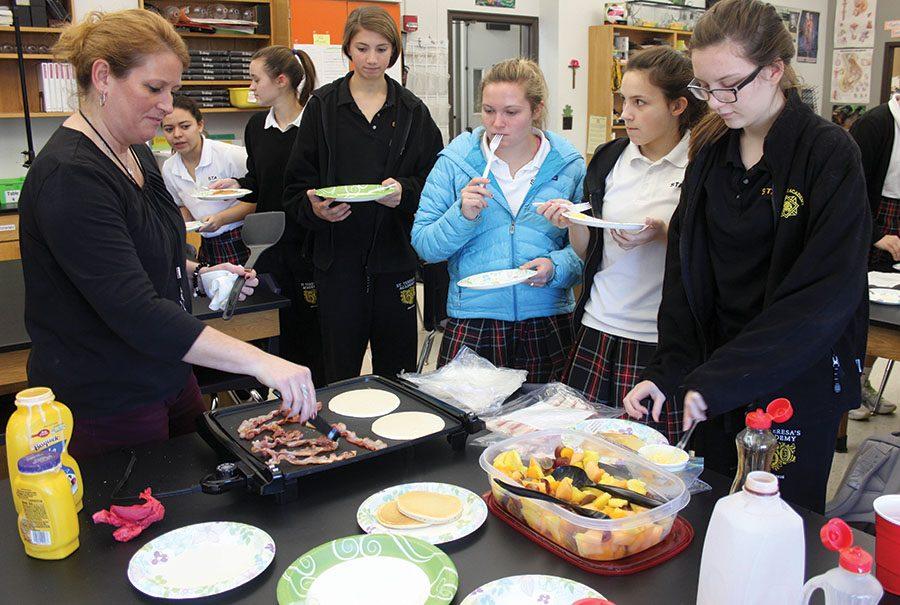 story by Alex Frisch
Like any other freshman, four years ago, senior Martina Florido had no idea what to expect from her first day in advisory. She didn’t expect that the first thing that would happen to her in advisory would be for the seniors to decide to make someone from every grade dance on top of the tables to Willow Smith’s “I Whip My Hair Back and Forth”.

According to Florido, you feel the sisterhood of St. Teresa’s right away in the Blake advisory.

“In other advisories, sometimes people will have to wait until sophomore or junior year to really feel the sisterhood, because it takes a while to get to know everyone and feel like a community,” Florido said. “In this advisory you get [the sisterhood] from the start, because you have this group of girls that are like, ‘We love you, you’re in our advisory and we’re going to take care of you.’ It’s community right away.”

Florido said that in the Blake advisory, girls from different grade levels watch out for each other. The seniors in particular help advise the underclassmen and are genuinely excited to watch them go through the same STA traditions that they’ve enjoyed over the years like the Teresian dance and the junior ring ceremony.

According to Florido, one reason the girls in the Blake advisory are so close is that they communicate outside of advisory as well. They even attempted to create an advisory CYO team. They also have a group chat that they use to keep in touch with each other.

“We celebrate everything: regular birthdays, half-birthdays,” Blake said. “Some months, like in January, we’ll have [a party] every week. Sometimes we’ll have two in a week. I try not to do three, that’s just too much.”

No one’s birthday is ever forgotten in the Blake advisory, according to Blake everyone’s birthday is always celebrated.. Birthday parties are always accompanied by plenty of their favorite food.

“If it’s for a birthday party, I usually let whoever’s birthday it is decide on the theme,” Blake said. “We have themed food parties like breakfast or pasta or Mexican. They don’t have to bring anything, and we have a sign-up for who brings what food.”

Food is a huge part of the Blake advisory, according to Florido. In their advisory they have two panini makers, a microwave, two crockpots and a skillet. Florido said that the advisory rarely orders food, opting to make it themselves instead. According to Blake, she is typically the one who organizes the parties and sends out reminders to make sure that everyone is staying on track.

The Blake advisory also enjoys being competitive together, according to Florido. When planning for school-wide competitions, it often takes the whole advisory. Mason said that one of the things she enjoys the most about the school-wide advisory contests is seeing her follow Blake advisory members’ creativity.

“We always get really competitive when we’re coming up with ideas, like with the sidewalk chalk contest,” said Florido. “We usually draw up ideas on all of the whiteboards in the room. [While planning the chalk drawing] we were all drawing our own ideas on the board and everyone was going crazy.”

The Blake advisory also has lots of traditions to say goodbye to the seniors, according to Florido. Every senior in the advisory gets a scrapbook, their favorite food and a handmade teddy bear, as well as other gifts.

According to Blake, she has been hand-making teddy bears for graduating seniors for the last 18 years.

“I make it all myself: the bear, the dress [the bear wears], the entire thing,” Blake said. “I think I’ve made a little over 100 bears in my time here. I have a necklace that I always make for the bear that has their name on it. It’s always a black bear with a yellow dress.”

Even after seniors graduate, they often come back to visit, according to Florido. The Blake advisory alumnae will stop to say hello and leave a note on the whiteboard. Florido said that sometimes advisees will even visit graduated seniors who go to college close by. Florido plans to visit the Blake advisory next Thanksgiving after she has graduated.

“We’re just really close knit,” Florido said. “If we see each other in the hallway it’s not just like ‘Oh I know her, we sit in a room together every day for ten minutes.’ I’ll ask them, ‘How was volleyball?’ or ‘How did your date go?’…We’re definitely a part of each other’s St. Teresa’s experience. I can’t imagine STA without them.”
alt cov by Julia Kerrigan