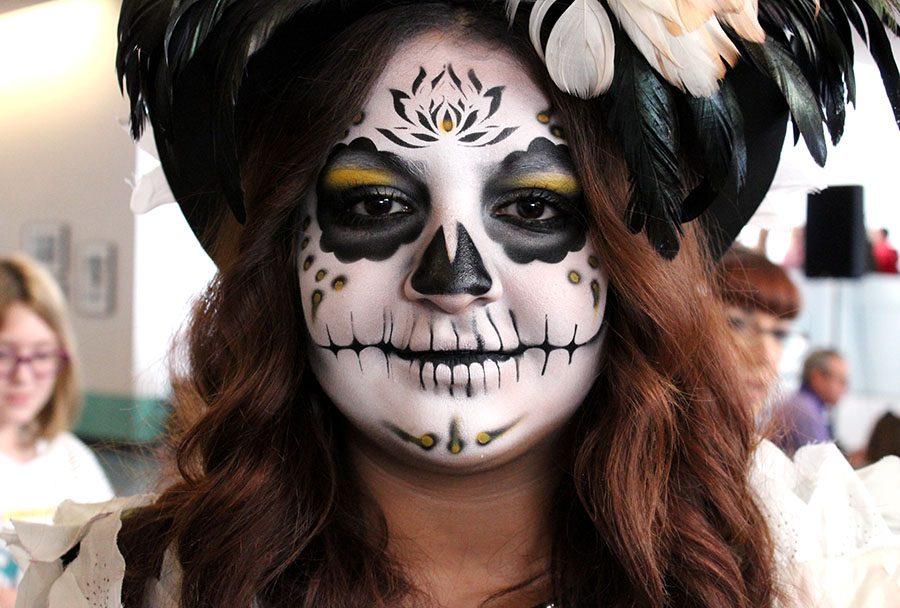 A Dia de los Muertos attendant modeled to show off her skull makeup on her face at the Nelson Atkins Museum Nov 6.The Nelson holds the event annually to honorthose who have passed away. photo by Meggie Mayer

by Meggie Mayer and Hannah Jirousek

story by Hannah Jirousek
The Nelson-Atkin’s Museum of Art hosted their annual celebration of Dia de Los Muertos from Oct. 27 to Nov. 6. The art exhibit and festival honored the Latin American holiday of the Day of the Dead, observed Nov. 1. It is believed that during this day, departed souls are free to roam the earth and reunite with their family and friends. It is traditional to honor the dead with singing, dancing, food and other lively celebrations. Various STA Spanish language classes offered extra credit for students’ attendance. On Nov. 6, the museum was filled with spectators of poetry readings, traditional dances, live music, art displays, craft demonstrations and other performances. Authentic holiday breads were also available from the local bakery Panaderias de las Americas and tamales from the Tamale Kitchen.
photos by Meggie Mayer
[nggallery id=1340]