Seniors talk with administration about this year's change in the dress code policy regarding yoga pants. 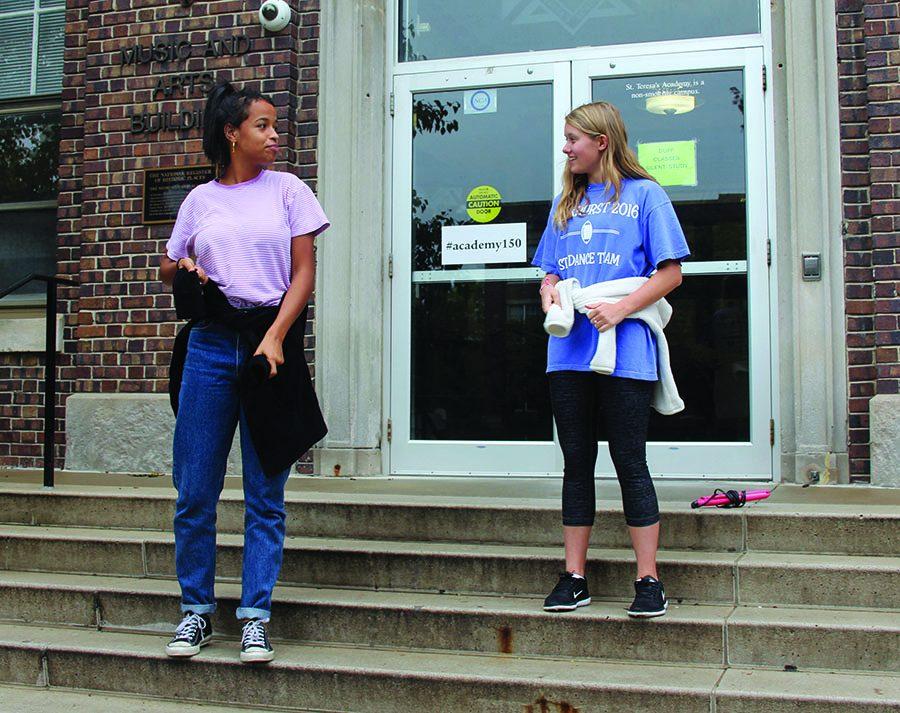 Seniors Maya Kalmus, left, and Elena Engelke tie sweatshirts around their waist during a dress down day. Every Friday, seniors may dress down if they were granted senior privileges. photo by Paige Powell

by Alexandra Frisch and Paige Powell

story by Alexandra Frisch
At the beginning of the school year, a new dress code policy was added to page 37 of the student handbook.

“Flexible, form fitting pants such as yoga pants, leggings or jeans may be worn with an untucked shirt/blouse which reaches a student’s fingertips when arms are rested at the side,” the handbook reads.

In survey of the STA student body 67.8% of the students who responded said that they saw some sort of a problem with the dress code. Some of these students took action by creating petitions or meeting with the administration.

According to Michaela Coleman, one of the students who has met with the administration about the dress code,  the new rule upset her because she felt it went against STA’s mission of empowering young women.

“I think that in general, saying, ‘You need to cover your butt’ is essentially saying, ‘I’m going to look at your butt and I’m going to decide that it’s inappropriate and sexual, and on my decision that it’s inappropriate and sexual, I’m going to tell you how to dress,” Coleman said. “And that is microaggressively objectifying women and dehumanizing them. The same rule doesn’t apply to any male anywhere. I’ve never heard that a male has to cover themselves to their fingertips. “

According to principal of student affairs the change in policy came about when a few of the faculty members questioned whether or not form-fitting pant where appropriate without some form of covering. The administration then compared STA’s uniform policies with other Sister’s of St. Joseph schools used.

“We did an analysis of other CSJ schools and basically we use the least intrusive formulation of the rule,” principal of student affairs Dr. Liz Baker said.  “Some schools make students wear shorts over their yoga pants, some don’t let them wear yoga pants at all. We decided we’ve let students wear yoga pants in a way that would still be uniform.”

There have been very few SBRs because of the new yoga pants policy, according to Baker.

“It hasn’t really been an issue,” Baker said. “There’s been a few but not really that many, there’s been more SBRs about out of uniform coats, which was another thing that we changed. I want kids to be warm no matter what, especially walking across the quad. With all uniform changes we talk to the faculty and staff in school leadership meetings.”
photos by Paige Powell
[nggallery id=1324]

“Honestly, I’m fine with most of what’s in the dress code,” a student who responded to the survey said. ”We do go to a respected Catholic school and by choosing STA we knew the dress code was in effect.”

“Some jobs have specific dress codes to keep up professional appearances and that’s basically what STA is saying… I don’t see why you wouldn’t want to dress at least somewhat decently for school.” another survey responder said.

Baker said that she thinks that as long as students are willing to be respectful and put in the effort, having them work with the administration on policies can be a very helpful thing.

“We have new people coming in every year,150 every year,” Baker said. “I know that for me, when I was new that first year, questioning and reflecting and evaluating and assessing, and all those things that are important…I do think that students coming and respectfully asking questions is a good, good thing.”

Coleman has met with administration several times, along with other students, to discuss the policy. According to Coleman, they were very good about listening to student input.

“When I met with Mrs. Bone and Dr. Baker they were very receptive,” Coleman said. “They totally understood what I was saying. I think that’s important…I see what they’re saying and I understand what they’re saying but I want to give them something else to think about. It’s more of conversation and not of an argument which I appreciate.”