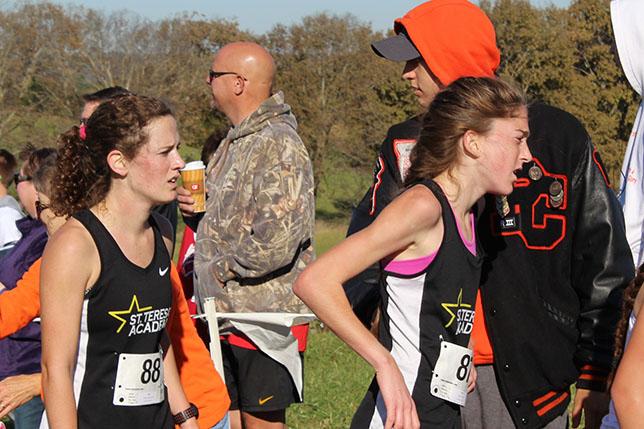 Senior Katie Donnellan, left, and sophomore Rose Crowe cool down after their State competition Nov. 5. Crowe and Donnellan finished within seconds of each other and were content with their results. photo courtesy of Katie Donnellan

While most students were preparing for class meetings last Friday, senior Katie Donnellan and sophomore Rose Crowe were already preparing for their Girls Class 4 State cross country competition the next day.

After fourth period, Donnellan and Crowe left school, grabbed a quick lunch before hitting the road and set off. Once they arrived in Jefferson City, Mo., they ran the official course, the Oak Hills Golf Course, as preparation for the official race the next day. Next, they took ice baths in preparation before going out to dinner with the team.

The next morning, they set out to run the course. According to Donnellan, the experience was a great one because “people lined the course almost the entire time.”

According to Donnellan, both she and Crowe were happy with their results. Their times, she said, were fast for the course with its hilliness. Additionally, Donnellan said that this year was the “fastest state has been run in awhile” – normally only 30 or 40 people finish in under 20 minutes, but this year, 54 finished in 20 minutes or less.

As the season comes to a close, Donnellan says that this competition was a great way to end her high school cross country career. On a wider level though, she says that for her, and, she imagines for many, “it still hasn’t hit [her] that XC is over.”