Olivia Robertson and Talia Parra are the new karate kids. 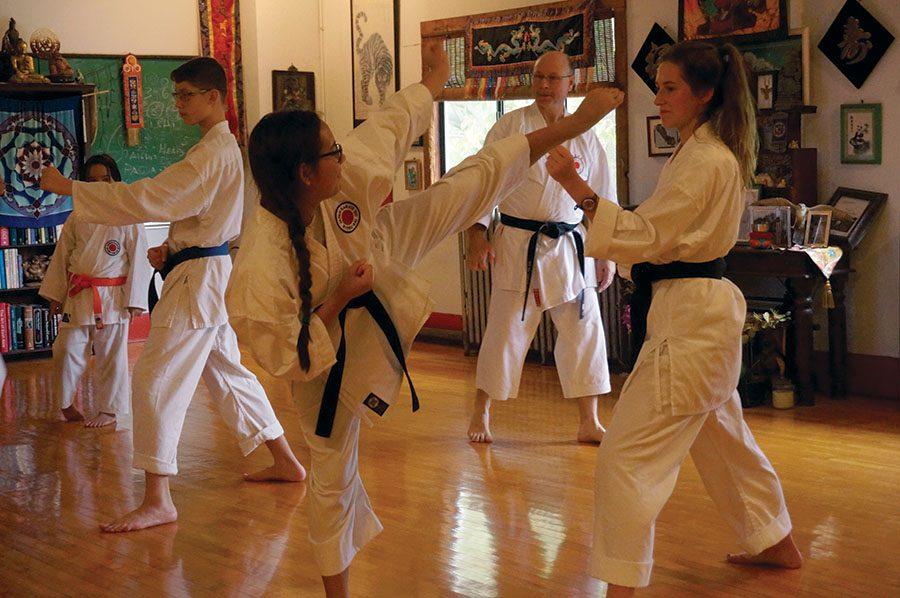 by Annabelle Meloy and Gabby Martinez

story by Annabelle Meloy
How did you become so interested in karate when not many other kids around you have participated in the sport?
Olivia: When [Talia and I] were younger, we thought karate was really cool. We wanted to try it out and we really liked it, and we were actually pretty good at it.

Talia: My parents kind of forced me to do it. I wasn’t good at a lot of other hand eye coordination sports like basketball and volleyball and soccer, so they thought that I needed to do something else more unique and also just because self protection. They wanted us to become more acquainted with it.
Will you continue doing karate even after winning your black belts?
Olivia: Yeah, I think so. After a black belt usually we do more teaching for the younger belts and the younger kids, but I think we’ll still go to tournaments and training sessions.

Talia: I agree that after you get your black belt, you kind of teach the white belts and just focus more on that, not really on continuing to get higher.
What kinds of activities do you usually do at karate?
Olivia: First, we warm up and stretch and then we usually do kihon which is basically going forward and backwards with moves. So the instructor would say a move and it’s a set of moves, and you go five times forward and five times back. Then we also do kumite which is sparring, and you have gloves and a mouth guard and shin guards. Usually during practices we don’t go full out, but when we practice for tournaments, we do. We also do kata which is  a bunch of moves put together in a routine, but there’s a lot of different katas for different Japanese karate styles. We do those in tournaments.
Would you say karate is in some ways more difficult than other sports?
Olivia: I would say yes. It’s kind of learning more about a different culture. We learn some Japanese in it and we learn about some history of some of the moves that we do. Also, it’s harder to learn how to protect yourself, and karate can be applied to the real world.

Talia: Yeah, I think that it is. It’s a lot more mental I guess because we go hours a day just kicking and punching. We do pure strength movements, and it gets really tiring but we still do it.
Explain the atmosphere of a competition.
Olivia: Typically our tournaments are farther away and some tournaments are bigger than others. At some tournaments, people come from Canada and Venezuela to compete, but that’s usually only the bigger ones. Then the smaller ones that we have around in Kansas City, they’re just local dojos in places that go to compete. So it kind of just depends on how big the tournament is. So everybody is grouped by your belt level and you compete against the people your age. In tournaments, you do kihon and kata, and sometimes you do bo kata which is with weapons. When you’re competing, you get to know your opponents because you wait for a long time and typically you fight against each other. But tournaments are really fun because you get to apply things that you’ve been learning for a long time and you get to compete against people and represent your dojo.

Talia: The atmosphere of the tournament is usually very tense I guess. You’re just kind of nervous and you’ve been preparing for this moment for a few months and you want to get it right, so the whole thing’s kind of tense, but when it’s over, we always lighten up, and we just feel really good.
photos by Gabby Martinez
[nggallery id=1323]
Does your coach talk to you in a foreign language sometimes or is it usually all in English? If he does, do you know some of the words or phrases he says?
Olivia: He is from Colombia, so he has a really thick accent, but we know all of the moves in Japanese and we know all of our stances in Japanese. We also know how to count in Japanese so he counts the moves for us, but he also translates it, of course, in English.

Talia: For punch, we say yama-zuki, and front kick is mae geri. Our sensei usually talks in English. He speaks Spanish, too, sometimes for students who speak Spanish.
Do you enjoy karate more than cross country and why or why not?
Olivia: For me, it depends because in karate, I have fewer friends because a lot of people are younger than me. New people come every year because they’re white belts. Since we moved dojos, a lot of the older kids have left. So it’s just us and these two guys that’s pretty much that are black belts. Emma Connelly, she was a senior two years ago here, and she does karate. She’s a second degree black belt.

Talia: The hard thing about karate is that as you move higher up the ranks, a lot of people tend to leave just because it gets boring or too hard so we’ve lost a lot of teammates. There was like ten of us. Now there’s only like two.
Walk me through the history you’ve learned about as you take karate.
Olivia: Our style of karate is Shindō jinen-ryū, and it originated in Okinawa, Japan, and our founder was Sensei Yasuhiro Konishi. During WW2, he worked with another sensei who did Aikido, and they created a kata called Seiryu. The kata was made for women and people who didn’t have any karate background and it was to teach them how to defend themselves in the war. It has two main moves that almost anyone can pick up on, and it can really help defend yourself.