STA runners claimed 2 of the top 20 spots at the first cross country meet of the season. 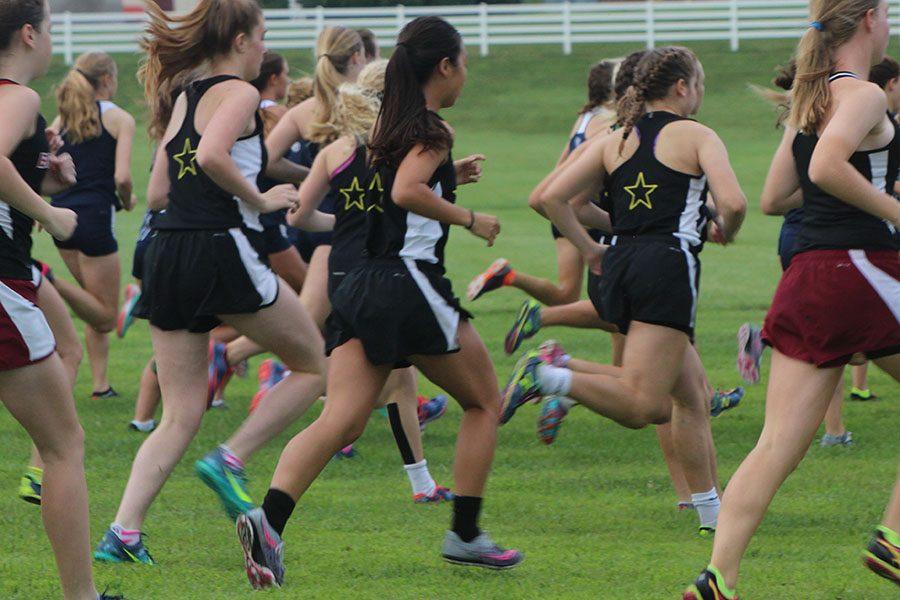 Members of the STA cross country team start their race and run as quickly as possible, in hopes of making it to the finish line with a time lower than their previous records. photo by Anna Louise Sih

The St. Teresa’s cross country team ran in their first meet of the season Saturday at Metropolitan Community College – Longview. In the two-mile race, they won second place out of the four participating teams.

“I felt like we did really well,” junior Monica Looney, who ended the race in 20th place out of 120 finishers, said. “It was a different course for us because we’ve been used to running the 5K at our time trials. This was a change-up, but everybody adapted well.”

Looney believes a large factor in their results came from the past month of practice.

“I noticed that we would start beating girls on the hills because we run hills at practices, so that helped us deal with that,” Looney said.
photos by Anna Louise Sih

Assistant coach Sarah Flogel also saw improvement from the runners during different parts of the race.

“We run a lot better in the second half of the race,” Flogel said. “They just kept moving up.”

“If we had had a third mile, they would’ve moved up even further,” head coach Karen Moran Redlich added.

“That’s what Katie [Donnellan, senior and co-captain] said,” Flogel replied. “She said, ‘I can’t wait until the 5K.’”