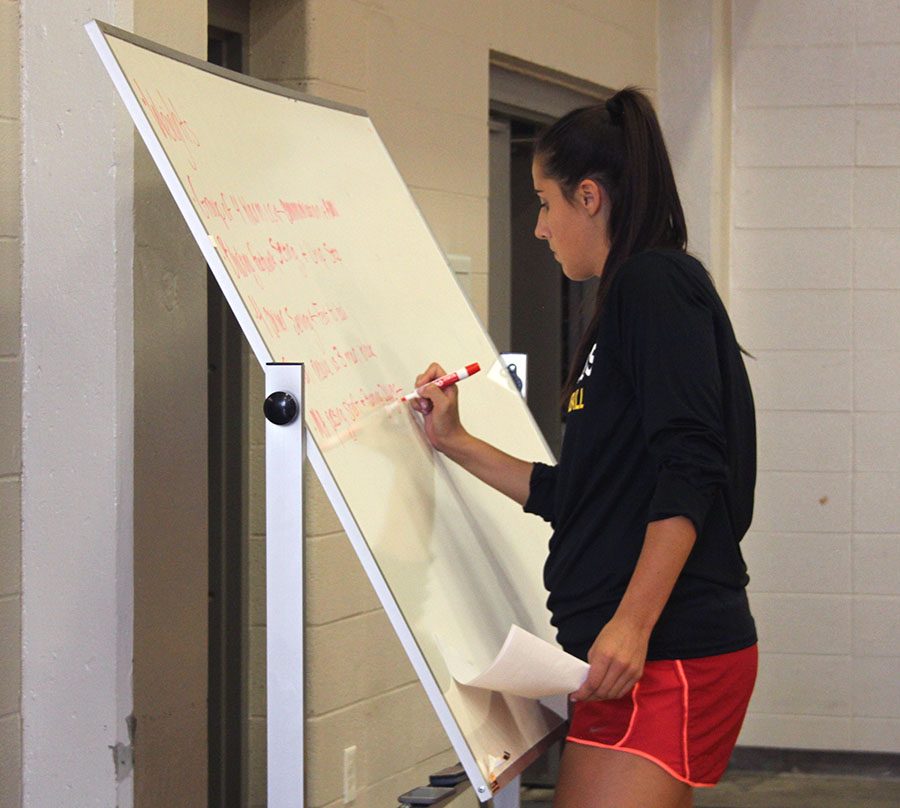 Volleyball coach Lauren Brentlinger writes strategy on the white board during practice. photo by Paige Powell

by Annabelle Meloy and Paige Powell

It’s out with the old and in with the new once again for fall sports. Latest coaches for both volleyball and cross country have arrived as the season approaches.

“Through the sport I feel more engaged with the team,” Boland said.

He knew he was interested in cross country and soon asked to be a part of it.

“I talked to coach Hough over the summer and told him I was interested in coaching,” Boland said. “One of the coaches just had a baby, so she was pretty busy, so I offered to chip in, and it kind of went from there.”

According to Boland, his coaching style is mostly positive, and the runners agree with him.

“This year feels slightly different because all coaches bring something unique to the team,” sophomore Olivia Robertson said. “The new coaches really put in a good effort in getting to know us and giving good advice.”

The cross country team has now had multiple new coaches the last couple seasons, most recently the replacement of Robert Tonnies by Boland.

“I think getting a new coach can either help or not help your performance,” sophomore Talia Parra said. “This year the new coaches are definitely helping me improve.”

For Boland, it’s all about work ethic by both the runners and the coaches.

“Honestly, just continuing to put in the work that the girls are doing by running with them and showing them that we’re all kind of in it together,” Boland said. “I would say we’re all equals, the coaches and the runners.”

Head coach Moran has been in the system for eighteen years helping new assistant coaches and runners reach their goals.

“Since the head coach is the same, the system hasn’t changed too much,” Parra said. “We do ab workouts differently now, but it’s nice to hear the new coach’s advice.”

Boland agrees that the cross country team feels good, and is steady through the work of coach Moran.

“I really don’t see much of a dropoff,” Boland said. “I think the important thing is that coach Moran has been kind of a constant. It’s her program so I think we’re all, us assistants, we’re just reiterating what she’s saying. But I think that’s the reason we’ve been able to keep it together as a group.”

“I think the nice thing too when we go on runs, [the runners] don’t really just see you as the coach standing on the sideline,” Boland said. “We’re running with them, we’re feeling that pain that they’re feeling.”

Lauren Brentlinger will also replace Lauren Mathewson as the new volleyball coach. For Brentlinger, STA was attractive because of its legacy, history and the kinds of players who compete.

“I found out in April, and I heard about the job through club volleyball contacts,” Brentlinger said. “I was just very excited because I knew the history here and how good all the athletes are.”

Brentlinger has been coaching volleyball for six years and it has become a passion for her.

“I love it,” Brentlinger said.“I was kind of unsure when I got into coaching if I would like it or not, but I do love it.”

For varsity volleyball player Megan Cotter, these words resound in the coaching style of Brentlinger.

“I really like [coach Brentlinger],” Cotter said. “She motivates us and pushes us. She wants us to win state.”

Cotter believes nothing has changed much, and their objective has remained the same, regardless of who is coaching.

“It feels the same because both of their names are Lauren,” Cotter said. “They both have the same goal, which is to win state, and we were so close last year so coach Brentlinger is basically saying the same thing. Our goal is to get back to state and do whatever we can to get there.”

Brentlinger thinks otherwise, knowing different coaches can have an effect on players from year to year.

“I definitely think it affects the athletes,” Brentlinger said. “I think that it’s hard for them to trust a new coach coming in that first season. I know from a coach perspective, it’s harder to build those relationships. I was at Raytown before this, and they had five head coaches in five years before I came there so there was no structure, there was no tradition. It makes it tough.”

Brentlinger knows how hard it is to come in as a new coach, but has plans to get more comfortable with the players.

“We had a lot of workouts this summer, and we competed in team camp over the summer basically outside of Saint Louis in Edwardsville,” Brentlinger said. “Through all of that and through our team bonding, I’ve gotten to know the girls and they’re goofy and fun-loving. They’re awesome.”

For Cotter, getting to know the new coach means putting in the work and time to make an impact on their relationship.

Brentlinger understands what putting in time and energy into something she loves means. The work that’s put in is what will show on the court.

“I think it’s just important to trust yourself, and if you put in all the work and all the effort, usually things end up how they’re supposed to end up,” Brentlinger said. “As long as you just put in the hard work.”