Most Americans are overly anxious about the upcoming presidential elections, but contrary to popular belief, the weight of the nation does not rest on you. 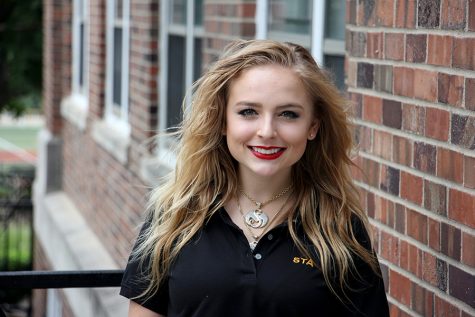 The 2016 elections have been widely revered as a massive trainwreck, if the train was full of highly combustible nuclear waste and bulldozed a home for crippled orphans. Sadly, the main difference here lies in that Hillary Clinton and Donald Trump name-calling and slandering one another gets far more media attention than an exploded orphanage ever would. After all, a passed tragedy is old news! The train already plowed the orphanage. That’s just sad, and sad doesn’t get viewers! But an impending tragedy? That’s what the media really sinks its teeth into, because impending tragedy stirs up anxiety, and boy, does that send ratings through the roof!

And what anxiety this particular election hath wrought. Somehow, the American public managed to get two fairly unfit candidates, both of whom have said and done despicable things, as primaries for either major party. It’s like a really bad SNL skit came to life and basically everyone has come to the same realization that we’re pretty much screwed. If you’re a member of the voting population, you’ve likely been in a fit of mass hysteria for months because your vote is going to be a decisive factor in precisely what path our country takes downhill in this next presidency.

I’m here to tell you to calm down, you narcissistic baby. You don’t matter. Here’s why.

When most people think of the voting process of a democratic government, it usually looks a little like so: you cast your vote, all the votes are tallied up, whoever gets the most votes is the winner. Does this make the most logical sense, given the concept of majority rule? Yes! Is this the way it actually works? Of course not, because that is far too simple.

While all elections are unique in their practices and principles, the following explanation focuses specifically on the presidential election. In order to understand the election process, one must first understand the electoral college. Each state is endowed with a select number of electoral votes based on its population (higher population, more votes, lower population, less votes). It is these electoral votes that are counted and ultimately determine which candidate will become president. Thus, when the votes are counted within your state, whichever candidate gets the majority gets all the electoral votes for that state. In other words, if 80 percent of Kansas votes Republican and Kansas has 6 electoral votes, the Republican nominee will get all 6 of Kansas’s electoral votes. So when you vote this fall, you aren’t really voting for the president per se, but rather to win your state.

Wait, if the state competitions are based off majority rule, then wouldn’t the majority rule end up winning the election any way? As circa 2000 Al Gore could tell you, not quite. Imagine again that Kansas with its six electoral votes is 80 percent Republican. Now, Iowa has 7 electoral votes, but is only 49 percent Republican, thus giving its 7 votes to the Democratic candidate. In this scenario, the majority vote should still technically be the Republican, because Kansas’s Republican 80 percent and Iowa’s Republican 49 percent still adds up to more individual votes than Kansas’s Democratic 20 percent and Iowa’s Democratic 51 percent. Basic math. However, because Iowa has more electoral votes, the Democratic candidate gets the most votes regardless. Basically, once your state is deemed Democrat or Republican, any opposing votes are essentially thrown out. Imagine you’re a Republican in Democratic Iowa. If you continue to vote Republican, your vote might never truly make it past round one, so to speak.

Now, I hope you’re asking yourself why we even have the electoral college to begin with. Back at the origin of our country’s democratic government, there was concern among the early government about the tribulations that could arise out of having the uneducated common man make major political decisions like electing president. Thus, the electoral college was created as a buffer of educated elites who could, if need be, step in to override a majority vote if the majority vote was deemed unwise. Nowadays at least, the electors are obligated to actually vote for their state’s majority unlike back then. But that even further fans the flames of the burning question: if the electors are basically just parroting whatever their states already voted on, what is the point of having the electoral college? Honestly, there really isn’t one. The electoral college is essentially a formality that we cannot abolish because the Constitutional convention that would have to occur to reform it would be such a huge expenditure and potentially dangerous free-for-all for hyper-revisionists. While it would make more sense to get rid of the electoral college and electoral votes in favor of tallying the actual ballots nationwide, the process it would take to reform the voting process is far too perilous (at least right now).

THIS DOESN’T MEAN YOU SHOULDN’T VOTE. If you’re a Republican in Democratic Iowa, sure, your vote may lose full consideration in the presidential race once the electoral votes are tallied, but that does not mean it is forgotten entirely. Your vote does serve a statistical purpose, as well as a signifier of your preferred candidate’s impact, even if they didn’t win your state. I don’t tell you all this to discourage you from voting; I tell you all of this so that once November rolls around, the pressure of having to decide which of these two evils will reign for the next four years doesn’t seem as grave. Even if your vote was make or break, don’t get me started on how restrictive the rights of the president actually are. Ultimately, you don’t matter, and this year that is a wonderful thing.