History of the seal

The Dart reveals the history of the school emblem in the middle of the quad. 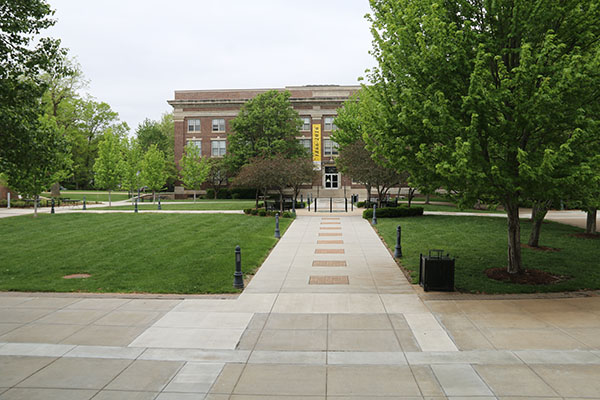 The maintenance men installed a barrier around the seal in hopes to help preserve the seal. The seal was breaking and the administration decided to install the barrier. photo by Clare Kenney

by Katherine Green and Clare Kenney

story by Katherine Green
On Oct. 15, 1999, Kansas City Mayor Kay Barnes addressed STA students and faculties at a ceremony to introduce new additions to the quad. One of these additions included “a large bronze school medallion set in concrete,” also known as the seal,  according to the Kansas City Star.

According to the St. Teresa’s parent newsletter of November of 1999, Nancy Hand, principal of academic affairs at the time, said that STA added decor to the quad to mark its 134th anniversary of the Feast of St. Teresa of Avila.

“Sr. Helen Flemington C.S.J. (‘60) blessed the quadrangle,” Hand said. “Mr. Byron and Mrs. Jeanne Thompson named the quadrangle…. We are very grateful to them and their family for their continued support of the Academy.”

The Thompson’s, who still have relatives who attend STA, named the new renovated center “the Little Flower Quad,” which included the new seal in the quad as well as $1.4 million in facilities upgrades, according the Kansas City Star. The updated campus included new landscaping, parking and a softball fields while in the middle of an $8 million capital campaign in order to modernize the school.

After the seal was placed in the quad, it became somewhat of a school symbol, according to 2013 alumna Nicole Sakoulas.

“When I think of the seal I think of all the friendships I’ve made at STA,” Sakoulas said. “It’s like a tangible symbol of STA.”
photos by Clare Kenney
[nggallery id =1253]

The tradition of not stepping on the seal out of respect began shortly after, according to Sakoulas.

“I feel like the seal is sacred.” Sakoulas said. “No one could ever step on it and it definitely had a lot of value to me. It sort of seemed like the most sacred item on campus.”

Recently, metal poles have been placed around the seal to form a barrier due to damage to the seal because it began to lift out of the ground. The causes of this are unknown according to STA president, Nan Bone.

“The Kissick Construction Company came to look at it,” Bone said. “They were going to pull the whole seal up and relay it, but they felt like it might not fit.”

The other option the construction company gave was to add the poles and chains around the seal.

“I like [the barrier],” Bone said. “It gives [the seal] more of the reverence it needs, and it stands out more.”

The school emblem in the middle of the quad has sentimental value to many students, according to 2015 alumna Courtney Didier.

“For some reason I always felt like the seal was in a way the thing that held STA together,” Didier said. “It was what connected all four buildings and no matter which way I was coming from as soon as I hit the seal in the middle and looked around I was able to find someone to say hi to along with notice just how happy everyone around me was.”

Some students have come to campus at night, sit around the seal and share memories about high school during their senior year, according to Didier.

“Most importantly the seal to me was a place that everyone could come together in sadness and happiness,” Didier said. “It was the place girls were able to honor and remember Becca along with a place that seniors always want to come back to before leaving STA for good.”