A group of seniors are regulars at shake bar Energizing Mission and usually go every day. 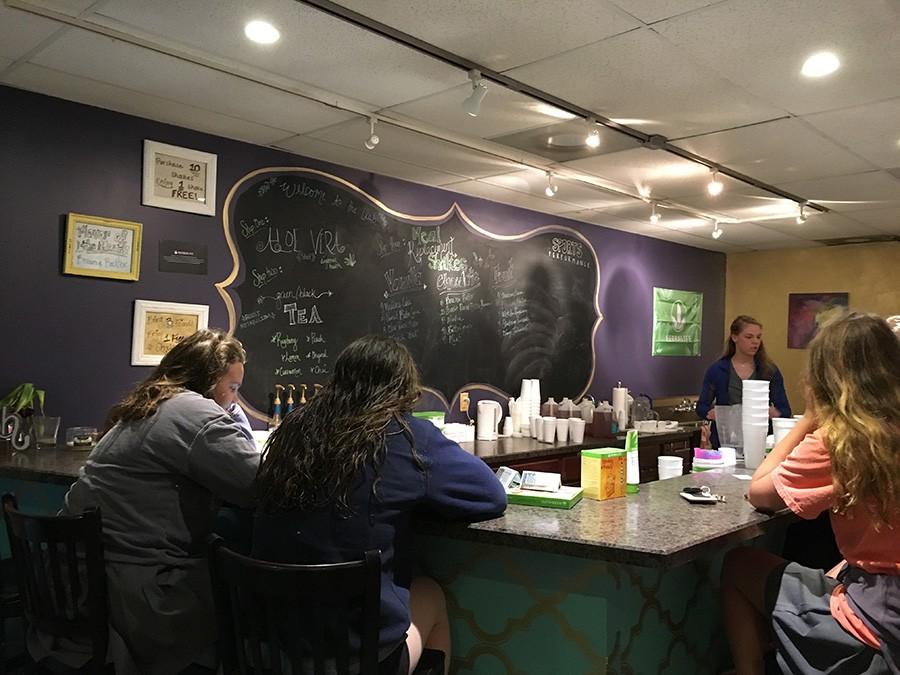 by Meredith Mulhern and Audrey Carroll

story by Meredith Mulhern
Whether it’s a coffee shop like the Roasterie or a restaurant like Bella Napoli, STA students choose their favorite eateries with care. And in the case of seniors Zoe Jackson, Gabby Clemente, Kenzie Grimaldi, and Allie McInerney, it’s Energizing Mission.

Energizing Mission is a local shake shop located in Mission on Johnson Drive. The shop serves Herbalife products, such as tea and protein shakes. “Energizing,” the title many STA regulars have given the shop, is a popular choice for a meal or snack among students at STA, Notre Dame de Sion High School and Shawnee Mission East High School.

Jackson, Clemente, Grimaldi and McInerney have each been going to Energizing regularly for about two years.

According to McInerney, Energizing’s “positive environment” keeps her coming back.

“I love Energizing’s environment,” McInerney said. “[The shakes are] also really good and good for you.”

“Energizing is a fun happy place to spend time at during the day and in the mornings,” Clemente said. “The shakes are great and the workers are awesome, which is why I keep coming back.”

All of the girls said that they consider themselves very close with the employees. Jackson and Clemente, along with seniors Rachael Skeens and Colleen DeRuyter, even attended the previous owner of Energizing Mission’s wedding.

“My favorite memory from energizing was about seven or eight months ago when Colleen DeRuyter, Kenzie Grimaldi and I witnessed the previous owner get engaged,” McInerney said. “She was so surprised.”
photos by Audrey Carroll

The girls all agree that being frequent customers makes them closer with the employees at Energizing.

“I’m in there all the time,” Grimaldi said. “So I just started talking to [employees] Alexis and Taylor more and more when I would go in there. I stay close with them by visiting Energizing frequently. I snapchat Alexis and Taylor a lot too.”

The girls also believe that the employees consider themselves to be close with them as well.

“I would say the employees would consider themselves close with me,” Jackson said. “I see them all the time because I go to Energizing every day. I really will miss the employees next year, but there’s a similar concept of it called “Suite Leaf” in [the University of Missouri campus].”

The girls also help out the employees at Energizing by helping behind the counter during busy times at the store.

“I help the employees everyday and have actually been offered a job there,” Jackson said. “I am considering working there this summer.”

Grimaldi also says that she does some tasks and odd jobs to help the business.

“I help the employees by washing blenders, making tea, aloe, and sometimes running to get ice.” Grimaldi said.

However, Grimaldi, Jackson, McInerney and Clemente are all leaving for college next year and will not be able to regularly get Energizing.

“I go almost every day of the week,” Clemente said. “I will miss it so much next year.”

Overall, the girls consider themselves “close friends with the employees more than anything.”

“I would say my relationship with the employees is fun because they always put a smile on my face,” Grimaldi said. “They never fail to make me laugh.”