Students should put differences aside in favor of stronger relationships between classes. 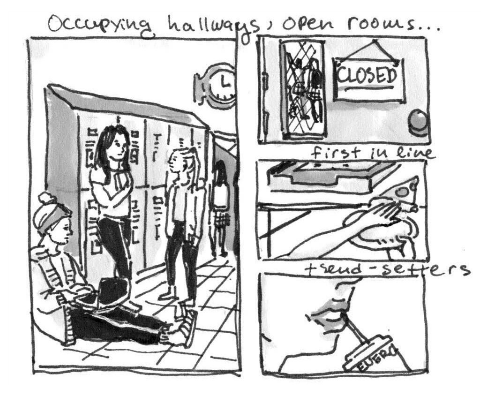 by Editorial Board and Ellie Grever

Freshmen don’t know what seniors have gone through. Seniors have forgotten the struggles of being a freshman. Freshmen want to fit in and be accepted. And seniors want to be feared and respected. Why are we caught in this full-scale fight instead of lending our hands to our peers?

According to the Dart’s survey of 192 students, 21 percent of students (41) feel that the relationship between upper- and lowerclassmen is negative. Although it may seem small, this number should still be zero. Rather than increasing current hostility between the grade levels, all students should realize the greater importance of our STA community.

This conflict is only holding us back from what we could be as a school. This hostility stems from exactly what we’re taught to avoid as young women. We shouldn’t be tearing each other apart–we’re all in the same boat. All seniors were freshmen at one point, and freshmen will get their chance at seniority in a few short years.

We should be using our school setting to foster a greater appreciation of each other, not creating a greater hatred for our own.

What we’ve been doing recently–making snide remarks, talking behind backs, and perpetuating prejudice–isn’t working. But more than that, it’s not what STA is about. This prejudice is what’s limiting the power and success possible by our school.

We’ve been taking small numbers of students and seeing them as the entireties of their grades. We’ve been making judgments on whether we like a class based on tiny samples. Shouldn’t we know better?

Most importantly, though, is that, regardless of grade level and age, we all have one thing in common: we’re all sisters, and it’s time we start acting like a family again.