Senior pursues her passion for basketball off the court

After a basketball injury her freshman year, senior Sophia Cusumano decided to coach a team at her former grade school. 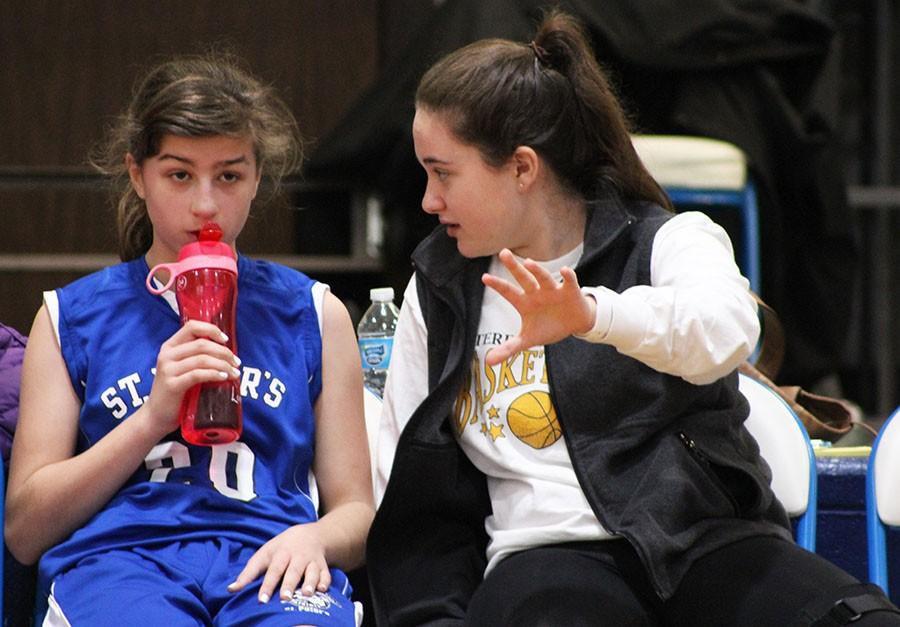 by Torie Richardson and Bridget Jones

story by Torie Richardson
After senior Sophia Cusumano sustained an injury at a St. Teresa’s game her freshman year, she was forced to end her career as a basketball player. Though she was one of the starting five freshmen and planned to continue playing for as long as possible, a tear to her meniscus cut her plans short.

“I got hurt at one of my games, and I had to get helped off the court.” Cusumano said. “The trainer told me I shouldn’t play for a while and I should get it checked out but I went back in the game, which was my mistake.”

Cusumano even tried to keep playing while going to physical therapy because she refused to accept the possibility of watching from the sidelines instead of playing in the game.

Cusumano stopped playing basketball at the end of her freshman season and has not been able to play for the rest of her high school career.

“I still haven’t accepted it honestly,” Cusumano said, “it’s one of the hardest things I have been through. Sports have always made me who I am, and when I got that taken away from me, I felt empty,” Cusumano said.

However, this school year Cusumano decided to pursue her passion for basketball by coaching a team at her former grade school, St. Peter’s School, on Tuesday and Thursday evenings.

“Ever since I stopped playing, I wanted to get involved in a different way,” Cusumano said. “I didn’t know when I was a player that I would end up coaching. It was something I had always wanted to do but I didn’t know if I would be able to. I don’t think I would’ve coached if I was still playing.”

According to Cusumano, the unexpected experience has taught her an important lesson.

“I think honestly I’ve gained a lot of patience and understanding for myself really,” Cusumano said. “I have a very short temper and I think realizing that [the girls I coach] are on a different level than I’ve always played with, I’ve had to be more patience and realize that things take time.”
photos by Bridget Jones

Girls on the team say Cusumano has helped them improve more than their dribbling and lay-ups. According to 7th grader Molly Lombardi, Sophia has helped her basketball team grow as people and become a close-knit group.

“Some of us weren’t really friends [before she began coaching us],” Lombardi said. “She’s taught us teamwork.”

Senior Natalie Rose played basketball with Cusumano freshman year and remains friends with her today. According to Rose, Sophia’s coaching potential shined through even when they were playing basketball together as freshmen.

“She is a good motivator to push other people to do their best,” Rose said. “I remember, when we were playing, she was always the one that was getting everyone hyped up like ‘let’s go!’”

As a result, Cusumano took something away from the STA basketball team when she had to quit because of her injury, according to Rose.

“It was hard not having someone who made practice fun and still pushed everyone to do their best,” Rose said.

After the last game of the season Saturday, Cusumano said she would describe the season as “challenging but rewarding.”

“I’m pretty bummed our season is over,” Cusumano said. “I invested so much time and I grew so close to the kids so it will be hard to not be around them.”

In the fall, Cusumano will be attending the University of Arkansas and hopes to find a team to coach while in school. However, she will miss coaching her own team here in Kansas City.

“It’s really impacted me because it’s been so cool to watch my kids grow,” Cusumano said. “It’s been cool to see the things that they’re capable of.”