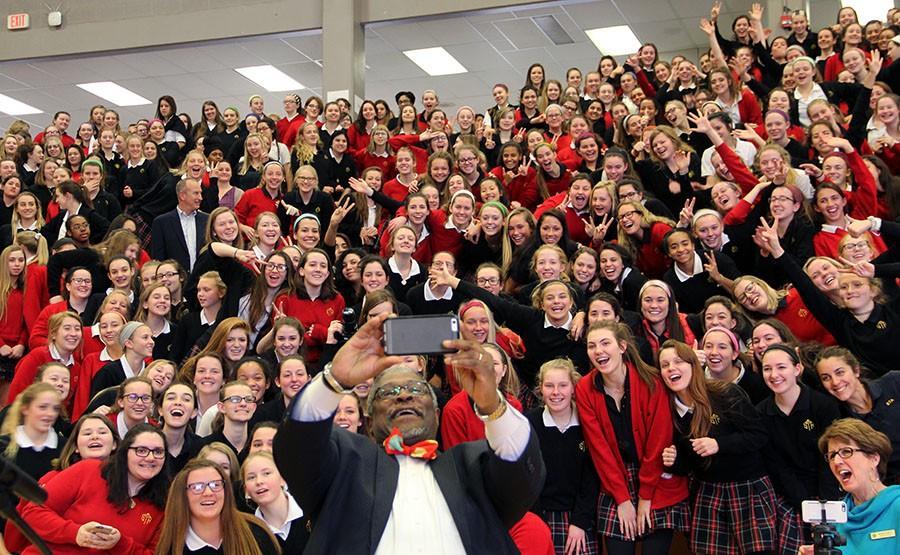 Mayor Sly James snaps a selfie with the student body at the Year of the Young Woman assembly Feb. 1. photo by Paige Powell

story by Helen Wheatley
Mayor Sly James visited STA Feb. 1 to declare 2016 the Year of the Young Woman. His visit included a tour of the science department and a ceremony where he gave the official proclamation. As the school is currently celebrating its 150th anniversary, Mayor James emphasized the importance of a quality education for young women.

In his speech, Mayor James constantly returned to the idea of women supporting each other. He recounted his initial years as mayor as he worked to partner with and hire more women on his staff and in his initiatives.

“It is absolutely vital that you recognize the need to be there for each other,” James said. “The glass ceiling is not broken yet, it’s not even really cracked yet. If you want to get through it, you’re gonna all have to bump your heads on it simultaneously.”

Mayor James continued to focus his attention on the opportunity young women at St. Teresa’s have to create profound change in the city.

“Your involvement should be not only honored but sought,” James said. “What I see here at St. Teresa’s is a tremendous success story in women’s leadership… There is no better place for women to learn women’s leadership than in a place where they can hold all the leadership positions.”

The idea to have the mayor visit STA for the declaration came during planning for the school’s 150th anniversary. As the oldest women’s organization in Kansas City, President Nan Bone worked with the planning committee to secure the mayor’s declaration.

“We thought gosh, being the oldest school in Kansas City, we should have the mayor here,” Bone said. “It was kind of a stretch, to see if he would declare 2016 the year of the young woman.”

For senior class treasurer Claire Jefferson, graduating from STA during the year of the young woman and the 150th anniversary means deserved recognition for STA students.

“It’s pretty tough to find a student who isn’t an extremely hard worker on our campus,” Jefferson said. “STA girls are so driven and set their goals so high, this will be even more empowering for us.”

Mayor James has been involved with helping young women succeed ever since his election in 2011. His Women’s Empowerment initiative aims to help the city government work better with and for women. However, his speech didn’t underline his past work with women’s leadership, but instead focused on what’s still to come.

“It makes me excited to think about the future of our city, thinking about how incredible leaders are being developed right here at St. Teresa’s Academy,” James said. “Here we are 150 years later, in one of the best schools in this entire region. It is only right that 2016 is the year of the young woman.”