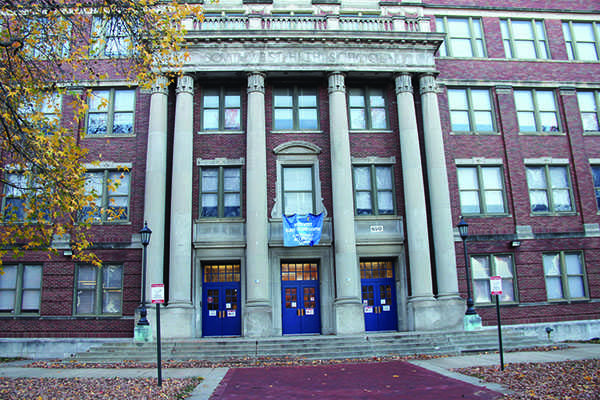 Southwest High School has been recommended to close next fall.

by Katie Donnellan and Paige Powell

The Kansas City Public School Board has made a recommendation to close 90 year old Southwest High School next fall due to the lack of students attending the high school and where these students live.

The closure is part of the Kansas City Public School District’s Master Plan. This plan began in 2013 to improve the school district. Students, parents, community members, and employees were invited to join in developing the Master Plan by completing surveys and attending meetings.

The plan includes closing Southwest along with elementary schools Attucks and Satchel Paige. The board received the school closure information in early November and is still deciding on the recommendation with the help of feedback from families and students of the district.
photos by Paige Powell

Interim Superintendent Allan Tunis and the School Board have received feedback that the highest priority is a need for improved teaching and learning. Other feedback included a need for improved extra-curricular activities, program and budget equity, improved transportation services, and customer service.

“We are hearing something needs to be done because we don’t have enough students to fill all the facilities we currently have,” Tunis said. “There are questions about which one is the right one.”
The District has five high schools below the desired school size of 700-1200 students and eleven elementary schools below the desired school size of 350-600 students.
“The proposal was made two years ago because of the number of facilities the district has versus the number of students in these facilities” Tunis said. “The district hopes to consolidate the schools with struggling numbers to have more resources.”
There are currently only 350 students attending Southwest. The building’s capacity is around 1,500 students. In addition, few of the students that attend Southwest live in the neighborhood, and many are traveling across town to school.
“The students that we serve are more centered around Southeast, rather than Southwest,” Tunis said.
According to Tunis, despite Southwest’s great facilities, Southeast was recently renovated both internally and externally. The campus has newer athletic facilities and is located closer to where more students from the district live. 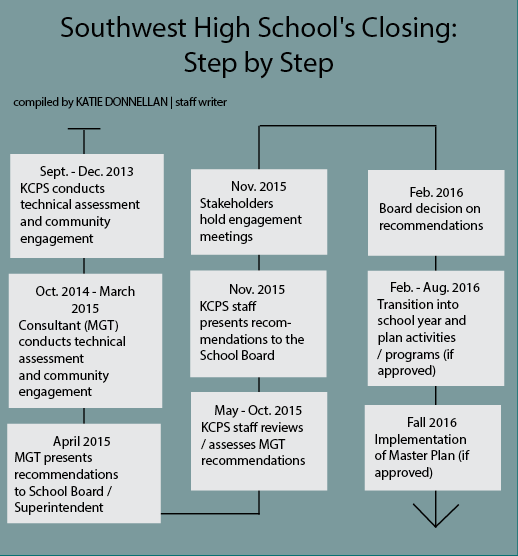 Junior Mary LePique lives down the street from Southwest High School and saw the school reopen in 2010. The school was criticized for behavior problems when it first reopened.

“If Southwest closes the neighborhood will be quieter, not that it is loud now, it will just have less traffic and activity,” Said LePique. “As the years since the school reopened have passed, I have noticed less kids skipping school and less cops at the school.”

Most students on a map are located around Southeast, so the students currently attending Southwest are traveling farther than they need to. The push for neighborhood schooling in the District will create new District boundaries and better transportation.

These new boundaries along with a feeder system are efforts to keep more students together from elementary school to middle school to high school to create a community feel and relationships.

In addition to new boundaries, the District’s transportation will be improved. Currently students walk up to six blocks from their house to a bus stop. With the new plan, students would only have to walk to school if they live within half a mile and bus stops would be no more than two blocks from home.

The Southwest building will not be for sale. The District is looking to find a good community partner to use the building.

“Our intent is to mothball the building,” Tunis said. “We want to find good use of all of our facilities that we are not using.”

By consolidating the number high school buildings the District will have more resources. These resources can be used for effectively to make more opportunities available to students at all schools.

“We can take those resources into higher priorities,” Tunis said. “We believe by that consolidation we’ll be able to provide better opportunities for kids, give them what they are looking for and meet their needs more efficiently.”

The Kansas City Public School District regained provisional accreditation on August 6, 2014. According to Tunis the District is looking to continue to improve by completing the Master Plan.
“I believe that the District is definitely making major improvements not just from an academic standpoint, but from a social perspective for our students,” Tunis said. “We are not where we want to be yet, we still have improvements to make. I believe these closures do allow us to get where we want quicker.”