STA JV seniors athletes face the possibility of getting cut from certain sports. 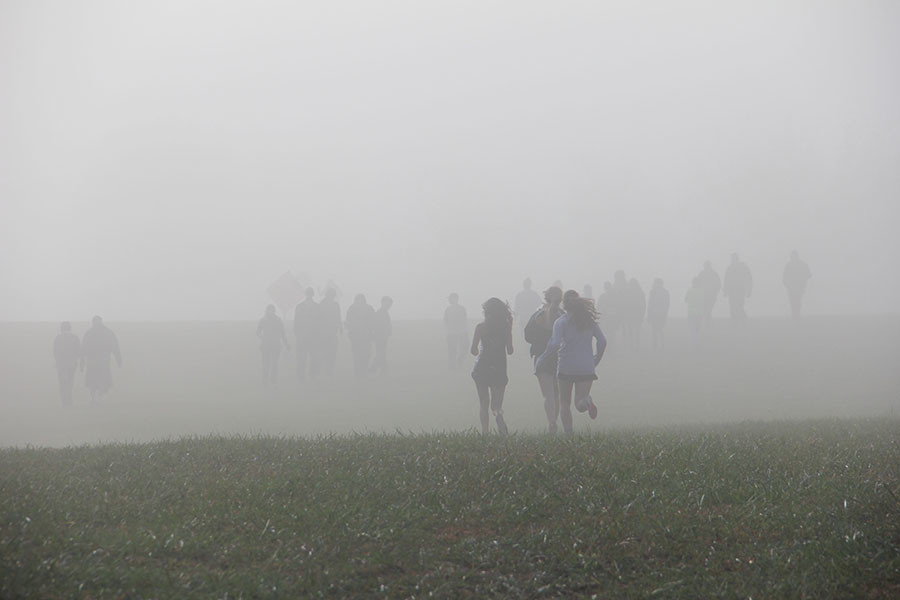 Members of the STA cross country team run to the start line at the Kearney meet Oct. 10. The morning of the race was foggy, but as the temperature rose the fog cleared. photo by Anna Hafner

by Meredith Mulhern and Anna Hafner

Senior cross country runner Kay VanAsdale looks at her surroundings. It’s a foggy morning at the Kearney Invitational Cross Country Meet, and the finish line is in sight. She keeps her pace, focusing on the final steps of her final cross country race. She crosses the finish, placing eleventh. It’s the end of her four-year career as a JV cross country runner.

According to STA Athletic Director Mark Hough, sports such as cross country, tennis, swimming and golf allow senior JV athletes, but  basketball, soccer, lacrosse and volleyball do not typically have seniors play on sub-varsity teams.

“Different sports have different numbers of roster spots available,” Hough said. “As a competitive interscholastic program and members of the MSHSAA, there are maximum roster spots set by the state association for different sports. Other roster limitations are considered by the head coach of the program along with the specifics of the sport and acceptable good sportsmanship practices, such as playing our seniors against sub-varsity freshmen from other schools.”

Despite the regulations set by STA and MSHSAA, many students do not agree with the cutting of senior athletes from certain sports. One STA student who disagrees is senior Kailey McNett, who was cut from varsity volleyball this year.

“[I don’t think that the regulations are fair],” McNett said. “I feel like [the senior class] has a lot of talent. We had ten seniors try out for volleyball, and I got cut and so did another senior, basically because of numbers.”

After being cut, McNett made the decision to manage varsity volleyball in order to “stay a part of the team.”

“I’ve played [volleyball] all three years here,” McNett said. “Then just to get to senior year and not be able to play kind of stinks, but I’m really glad I managed. I still feel like I’m part of the team, but I think it would be a lot more fun if I was actually playing. I’ll sit there and be like ‘I could be playing right now’, but sometimes getting cut has to happen.”

“I think that seniors should be able to play JV,” VanAsdale said. “I was on JV for all four years [of cross country], and I loved it.”

According to VanAsdale, without JV seniors on the cross country team, “there wouldn’t be as much leadership.”
photos by Anna Hafner

“Without JV senior runners there wouldn’t really be anyone to encourage the underclassmen to keep going,” VanAsdale said. “We only had one senior varsity runner this year, and although she’s a great leader, it’s hard to be that kind of mentor to forty other girls that are underclassmen when you’re alone.”

According to McNett, she would “definitely play JV” if she was given the chance.

“I would play on JV,” McNett said.  “I like managing and being with all my friends who are on varsity, but I think I would have so much fun on JV too. I played on JV last year, I love the coach and it would be great to play.”

VanAsdale is also grateful that she had the chance to participate in cross country as a JV runner.

“I love cross country,” VanAsdale said. “I definitely wouldn’t have joined though if I knew the only way to run senior year was if I could run a twenty-minute 5k [in order to be on varsity].”

However, according to Hough, JV teams are a “great way for underclassmen to develop skills.”

“The sub-varsity teams are a great opportunity for underclassmen to be a part of a team, develop skills and to prepare for roles on the varsity team,” Hough said.

“I don’t see the negatives of letting seniors play down,” McNett said. “If it’s the thought process that if you’re older you’re more talented, that’s not necessarily true. I think [STA] should let everyone play.”