Managing Madness: how the maintenance men provide for, protect and participate in the STA community

The building and grounds staff has interesting stories from their time of hard work at STA. 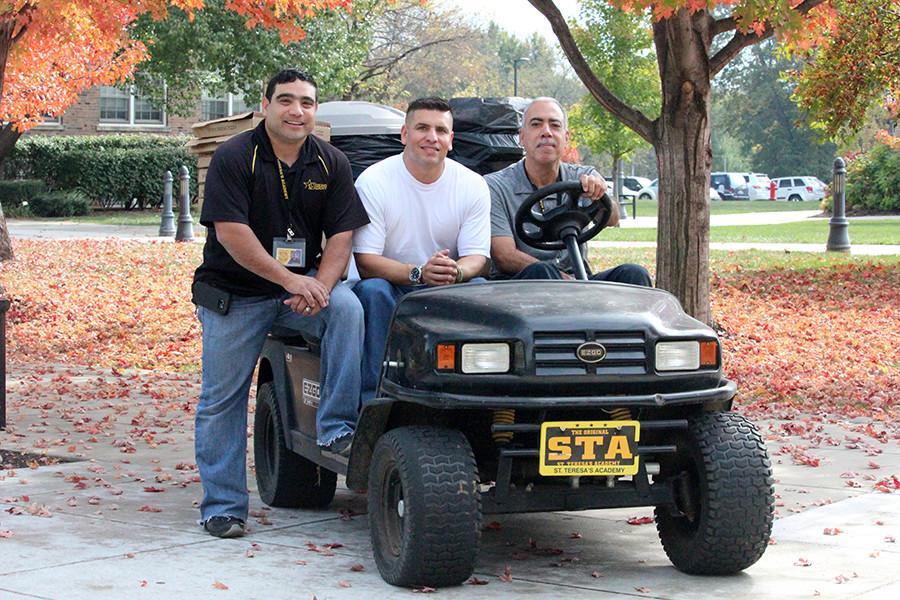 by Torie Richardson and Maggie Knox

story by Torie Richardson
Students raise their eyebrows as they drive into the STA parking lots, and falter as they walk over the beer bottles and crushed glass that riddle the grass and concrete. The students who file into silent study gather paper towels, annoyed as they push away food left over from lunch, crushing crumbs on the ground. Students in Windmoor complain as they set up tables and chairs before beginning class, and complain that no one bothered to set them up after yesterday’s event. This is life without our maintenance men.

STA’s building and grounds staff consists of facilities manager Rafael Ramirez, assistant facilities and security manager John Palacio and operations manager Gilbert Mont. Together, these three men are responsible for the daily upkeep of St. Teresa’s Academy. Better known as the maintenance men, they also must check “work orders” from teachers, staff members and volunteers, according to Ramirez. This could include anything from adjusting the air conditioning in a room, setting up a projector or carrying something too heavy for a teacher to lift.

“I don’t think there’s anything they’ve asked us to do that we haven’t done,” Ramirez said.

Administrative assistant Kelly Drummond says she works directly with the maintenance men every day because she is in charge of making room reservations, which members of the STA community file when need to use a room for class meetings or other events. Teachers also contact her with concerns directed toward the maintenance men.

“Anytime something happens, something breaks, I have to radio them and get them to take care of it,” Drummond said.
photos by Maggie Knox
[nggallery id=1139]

In addition to maintaining the STA campus, the maintenance men also assist STA students. For example, when a girl thought she threw her class ring in the trashcan, Ramirez took the trash out of the dumpster to look for her ring. When another student dropped her phone into a street drain, the men opened the drain to retrieve it.

“[We deal with] funny things like ‘a girl threw up over here,’ ‘a faucet is leaking over here’…a million things could go wrong,” Palacio said.

The building and grounds staff have also helped students with car trouble.

“On Main [Street], there was a student [whose] glass was broken on the passenger side,” Ramirez said, “and we vacuumed it out of her car.”

Ramirez says the men also jump “quite a bit” of cars whose batteries have died, and wipe markers off cars that have “PROM?” written on the back, if students want them to.

According to Drummond, the maintenance men work hard in their behind-the-scenes work, but have a “pretty thankless job.”

“They don’t get a lot of credit for how hard they work,” Drummond said.

Palacio even once chased a teenaged boy who had attempted to break into a car parked on the STA lot through Brookside.

August 20 last year, STA went into lockdown after neighbors reported that unauthorized persons were in the sophomore lot with the intention of breaking into a car.

While most students were hiding in school classrooms, Ramirez and Palacio were in the parking lot resolving the problem. As Ramirez remembers, there were about six teenagers in the lot. He began to chase them, so they fled to their van and attempted to drive away.

“I jumped in front of the van,” Ramirez said.

Ramirez said he didn’t think about the danger he was putting himself in. He was carried by adrenaline and the thought of keeping students safe.

To avoid hitting Ramirez, the suspects jumped out of the van and scattered, so Ramirez called Palacio over the walkie talkie, and told him to chase them on foot.

Palacio said that, at first, he didn’t know why he was chasing the teen boy. He was only doing what Ramirez had instructed him. However, Ramirez explained the situation over the walkie talkie as Palacio ran, and Palacio ended up chasing the boy through neighborhood backyards for 35-40 minutes.

Policemen in Brookside were able to catch one of the suspects, though the others escaped.

“The cops cornered him in a garage,” Palacio said. “We weren’t involved after that.”

About chasing the boy through Brookside, Palacio said “everybody wants to hear that story.”

However, the maintenance men have a lot of other entertaining stories, according to Palacio.

For instance, one day Palacio and Ramirez were changing lights out. Palacio was changing the balance, cutting wires in a small electrical box one at a time, when he decided there had to be an easier way to achieve his task.

“I got lazy….I went to cut the wires all together and BOOM,” Palacio said. The lights went off, and, for a moment, Palacio thought he was dead. Though he was safe, he was a bit shaken up, especially because his tools were burnt where he had cut the wire.

“I don’t think I’m gonna do that anymore,” Palacio said, laughing. “But funny things like that happen sometimes, you know, those little things that teach you.”

Although Ramirez has long hours, he said he tries to find time to participate.  When he participated in Dancing with the Stars, a STA dancing contest inspired by the TV show, Ramirez would find short increments of time to practice. He might practice for thirty minutes after school one day,  then practice for an hour in the evening another day, he said.

While Palacio said he wouldn’t participate in Dancing with the Stars, he said that sometimes he’ll join in with Ramirez if he sings while doing a project – but only if no one is watching.

“Mr. Ramirez is funny; he dances and sings a lot,” Palacio said. “Me, I’m shy. If someone comes, I’ll stop. [Ramirez] will keep going.”

The maintenance men mostly work on projects during the summer, which includes a lot of painting, according to Palacio. During the school year, their work is more varied, and sometimes requires even longer hours.

Ramirez also said that Mont, who is recovering from back surgery, usually comes in at around 11:30 a.m or 12 p.m. and works until 8 p.m. He helps out with after school activities like sports practices, making sure the campus is secure and that students are safe.

When asked what he would like STA students to know, Ramirez said he would advise girls to “get involved.”

“There are so many opportunities here. If you close yourself, you stay closed,” Ramirez said. “If everyone would serve, the world would be a better place.”

When asked what he would like STA students to know, Palacio said “Mr. Ramirez is real funny.” He also said “this is a good place to work. We really like it here. You guys make us laugh.”

When asked what she would like STA students to know, Drummond said students “don’t know how nice and caring [the maintenance men] are.”

“We interrupt them all day to do the things no one else wants to do, and they do it with a smile on their face,” Drummond said.