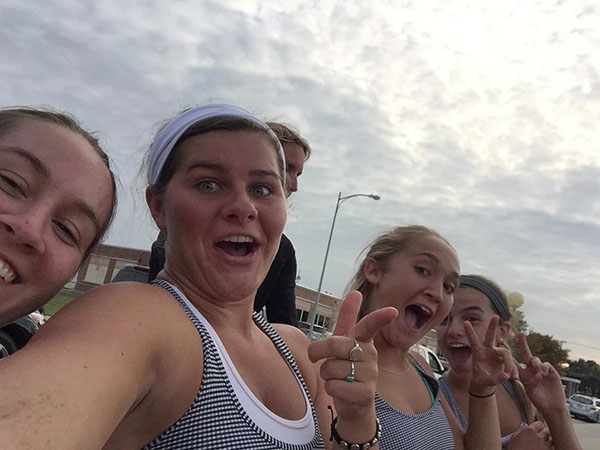 Juniors Mary Claire Connor and Sophie Sakoulas qualified for state with a win in their doubles match. Connor and Sakoulas had never played doubles before Coach Lana Krause decided to pair them together for postseason.

According to Krause, the coaches go through a process for picking the doubles team during postseason.

“We base what we do in postseason on a few factors,” Krause said. “We look at the other teams to see what we think they will bring to individual districts in the form of singles and doubles teams.  It is a guess, but we can usually get a pretty good feel for that after playing some of the teams and looking at their results from the season.”

“Once we do that, we look at what we think are the best combinations on our team to get as many of the girls through to Sectionals and State as we can. We take into account playing styles, chemistry, strengths in singles and doubles.  With all that considered, these were the teams that made the most sense.”

Krause evaluated each of the girls skill and paired accordingly.

“Mary Claire and Sophie had never played together as a team, so I am sure everyone was wondering how that would go,” Krause said. “We had confidence in them with their combination of Mary Claire’s athleticism and strong shots and Sophie’s ability to construct points and place the ball in the right place at the right time.”

The state doubles match will be played October 16 and 17 in Springfield, Mo. at the Cooper Tennis Complex. Krause reassured the girls they would not miss anything.

“I promised the girls we would have them back in time for Teresian,” Krause said.