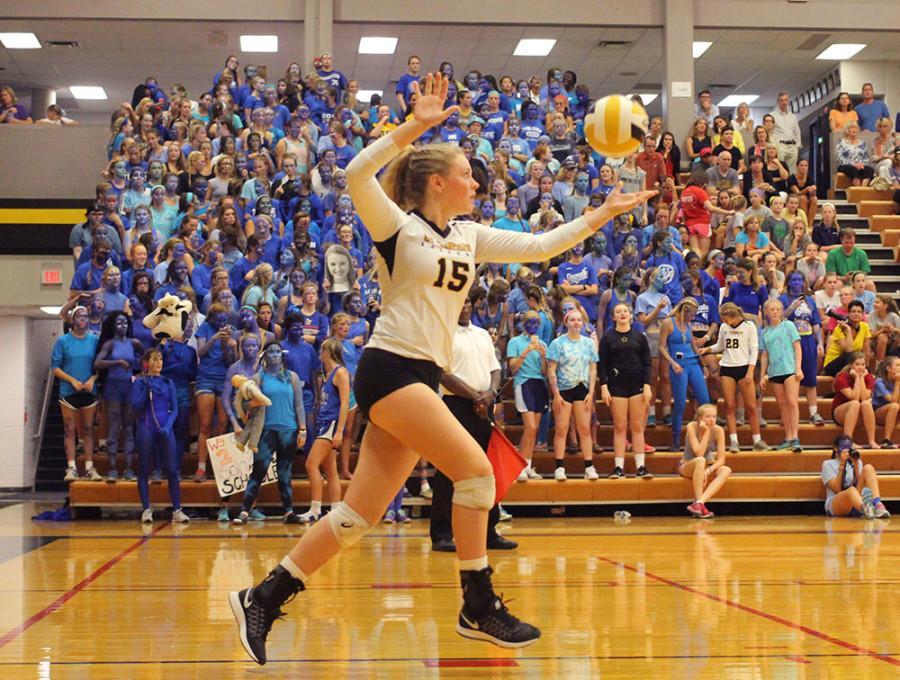 Senior Delaney Meyer serves the ball during the STA vs. Sion game held in the Goppert Center Sept. 16. Meyer was recently named one of three team captains for the 2015 volleyball season. photo by Kat Mediavilla

“[Mathewson] was a name that kept coming up,” Hough said. “And, when it came down to it, she was one of our best interviews.”

“The Leadership Council is a good [medium] between me and the team,” Mathewson said. “They help me know how everyone is feeling, if there’s drama on the team and other things like that.”

Another plan established by Mathewson is entirely original to STA and takes STA sisterhood a step further,  according to Hough,

“After [Mathewson] had announced whether the girls were on varsity, JV, sophomore, or freshman teams, she did something I had never seen any other coach here do before,” Hough said. “[Mathewson] set up a ‘big sister and little sister’ system. Each [duo] had to come up with a spontaneous dance routine as their team was announced [and] came up with a handshake they can do in the hallway when they see each other.”

The team has also been participating in team bonding activities outside of practice, including  a team camp over the summer, team meals, painting the team locker room, a lock-in, and a visit to a local ropes course. According to varsity player senior Jamie Tholen, Mathewson’s bonding initiatives have well exacted their purpose.

“We’ve definitely grown a lot closer,” Tholen said. “We’ve spent a lot more time together this year than we did last year, and it’s really helped everyone become friends on a more personal level.”
According to Mathewson, the root of her emphasis on team-building lies in her view of coaches as advisers both on and off the court.

“These girls are going through a lot in high school,” Mathewson said. “[They’re] picking friends, picking boyfriends, picking colleges. I want to be a mentor them and an example for them so they can come to me and ask me anything.”

Mathewson has succeeded boundlessly in both strengthening team bonds and mentoring individual players, according to Tholen.
“I think [Mathewson] has been a wonderful mentor to myself and other players,” Tholen said. “Coach Mathewson has made the whole team excited to get to know each other more, on and off the court.”